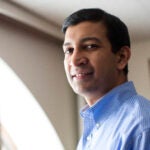 For decades, Harvard Graduate School of Design (GSD) professor Alex Krieger has offered a walking tour of Boston as part of his introductory urban design courses. In this year’s digital environment, Krieger has adapted his tour for viewers anywhere around the world.

Krieger takes viewers on his now-iconic walk around Boston, offered as a 30-minute video tour. Stopping at locations key to the growth of the city — from East Boston, which was once five islands that were consolidated in the late 18th to 19th century, to the Shawmut and South Boston Peninsulas — Krieger speaks of the historic and contemporary geographical, infrastructural, and racial conditions of Boston, a city in “constant need to create land.”

Krieger is currently research professor in practice of urban design at GSD, where he has taught since 1977.  He has served as chair of the Department of Urban planning and Design, director of the Urban Design Program, and associate chair of the Department of Architecture. In addition to design studios and seminar courses at GSD, he teaches a Gen Ed course on the evolution of American cities at Harvard College. In 2017, he was named one of the 15 Professors of the Year by the Harvard Crimson. Krieger is also a principal at NBBJ, a global design practice.

Since 1984, Krieger has provided architecture, urban design, and urban planning services to a broad array of clients in numerous cities worldwide, focusing primarily on educational, institutional, healthcare, and public projects in complex urban settings. In addition to serving on university-wide committees to improve Harvard’s main campus and its expansion in Allston, Krieger has also served as member of the United States Commission of Fine Arts and the Riley Institute, and founder of the Big City Planning Directors Institute and director of the Mayors’ Institute on City Design. He is also a board member for the Boston Public Library’s Norman B. Leventhal Map and Education Center and for Historic Boston.

Krieger most recently published “City on a Hill: Urban Idealism in America from the Puritans to the Present” (Harvard University Press, 2019).