Ahead of his installation, Rev. Potts discusses his role at Harvard 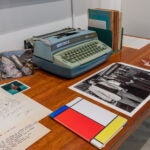 On Dec. 12, Harvard University President Larry Bacow will formally install the Rev. Matthew Ichihashi Potts as the Pusey Minister and Plummer Professor of Christian Morals in the Memorial Church, an appointment with a storied past and a central role to play in the diverse spiritual life of the Harvard campus.

Potts is the 10th Plummer Professor and Pusey Minister at the University, and the first of Asian descent. The appointments were created at Harvard in 1855. There are rooms and plaques in the church dedicated to the memory of some of his predecessors — Andrew Preston Peabody and George Arthur Buttrick — and the Appleton Psalter Books used in services daily are dedicated to the memory of the Rev. Professor Peter John Gomes, who served from 1974 to his death in 2011.

But Potts is beginning his tenure at the Memorial Church in equally historic times. A global pandemic, social inequality, political upheaval, and increased skepticism of organized religion amongst young people, mark just a few of the pressing issues facing students, the campus, the nation and the world. In the video above, Potts speaks about his ministry, his family, the experience he gained at his former church in Falmouth, Mass., and the bridges the appointment is creating between the different aspects of his life.

The installation service will take place at 11 a.m., Sunday (Dec. 12) in the Sanctuary of the Memorial Church.