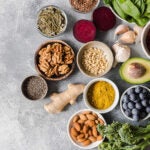 By the time Hyegi Chung, M.P.H. ’18, arrived at Harvard T.H. Chan School of Public Health to work on her master’s degree, she had years of experience analyzing health care companies. As an investment banker in Singapore and China, she regularly picked over the balance sheets and business models of biopharma and life sciences firms. But, she said, she didn’t really know all that much about health.

“I came to Harvard Chan School so that I could study the science of public health,” she said. “And from the moment I came, I knew that I wanted to do something at the crossroads of health and technology.”

Mission accomplished. Soon after graduating, Chung joined Verily, a subsidiary of Alphabet, the parent company of Google. Currently, Verily has more than a dozen projects in development that aim to leverage technical innovation to improve human health. Working with numerous partners, some of its projects include developing platforms that help people living with diabetes manage their condition better, searching for biological and physiological markers of Parkinson’s disease, and building tools to bridge the gap between clinical research and clinical care.

Recently Chung, who’s Verily’s country lead in Singapore, visited campus with her colleague Evdoxia Kakani, who was a postdoctoral research fellow in the lab of Harvard Chan malaria researcher Flaminia Catteruccia before joining Verily as a scientist. Together, they met with students in instructor William Bean’s health management practicum. They talked about their career paths and also showcased Debug, an innovative project of Verily’s that’s aimed at reducing mosquitoes that can spread diseases.

Debug is a tech-centric approach to the Sterile Insect Technique and involves rearing and releasing sterile male mosquitoes in order to drive down populations of wild Aedes aegypti mosquitoes, the primary vector of dengue, Zika, chikungunya, and yellow fever. The program uses a naturally occurring bacterium called Wolbachia to functionally sterilize Aedes aegypti mosquitoes, while cutting-edge software and hardware is deployed to grow and hatch millions of mosquitoes and then sort them by sex.

Kakani and Chung both work on Debug at Verily, but in very different capacities. Kakani, who is based in Verily’s South San Francisco office, collaborates with hardware and software engineers, other biologists, and operations managers to fine tune the process, collect data, and ensure that the highest scientific standards are applied.

Chung is applying her business acumen and public health education in Singapore, working closely with health officials, community members, and other stakeholders on Debug’s collaboration with the National Environment Agency (NEA) of Singapore for NEA’s Project Wolbachia. Early results from field trials show that Debug’s approach has led to steep drops in wild Aedes aegypti in release areas.