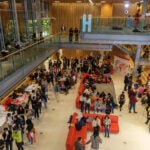 When Chester Pierce ’48, M.D. ’52, took the field at the University of Virginia on Oct. 11, 1947 as a member of the Harvard football team, it was recognized as the first time a Black student-athlete played college football at an all-white university south of the Mason-Dixon line. The practice at the time was for integrated teams to travel south without their Black players, and the opposing team would withhold players of similar ability. However, the integration of Major League Baseball by the Brooklyn Dodgers’ Jackie Robinson in the spring of 1947 helped spark change.

Though an extraordinary moment in the history of race in this country, the trailblazing Pierce preferred to let others tell the story. The historic moment was remembered at Friday’s football game, celebrating its 75th anniversary with an onfield recognition of Pierce’s daughter, a tribute video and commemorative T-shirts distributed to 500 fans. Yulander Wells, a deputy director of athletics, spoke of its significance.

“All of us stand on Dr. Pierce’s shoulders due to the struggles he endured on behalf of future generations,” Wells said. “His story is more than a history lesson — it’s a powerful lesson in how sport has always played a critical role in making this country and the world a better place.”

A native of Glen Cove, New York, Pierce went on to an extraordinary career in psychiatry, working to alleviate health disparities, and to promote human rights around the world. A professor of psychiatry at Harvard Medical School and professor of education at Harvard University, he was the founding president of the Black Psychiatrists of America Association, coined the term “microaggression” in the 1970s, and served as an adviser in the creation of Sesame Street. He passed away in 2016 at the age of 89.

A pioneer in the field of global mental health, The Chester M. Pierce MD Division of Global Psychiatry at Massachusetts General Hospital is named in his honor, as is the American Psychiatric Association’s Human Rights Award. Antarctica’s Pierce Peak bears his name, in tribute to his work studying the behavioral effects of extreme environments.

Pierce lectured on all seven continents and was the recipient of countless professional awards and honorary degrees, including the 1997 Vivian Pinn Distinguished Lecturer Award, given by the University of Virginia for lifetime achievement in the field of health disparities.