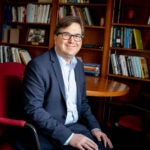 New inflation report offers hope, but expert says we’re not out of woods yet

News headlines in recent days have focused on partisan warring over whether Congress will come to an agreement to raise limits on how much the U.S., which passed a deadline last Thursday, can borrow before the nation starts defaulting on its obligations. Actually, economist Carmen Reinhart says, if history is any indication both sides will come together to resolve those issues before any real damage is done. An arguably bigger problem involves serious challenges posed to the global economy by high inflation, anemic growth, and geopolitical tensions, which could result in worldwide recession.

Reinhart, the Minos A. Zombanakis Professor of the International Financial System at Harvard Kennedy School’s Mossavar-Rahmani Center for Business and Government, spoke to the Gazette about the prospects for the global economy in the coming year. A chronicler of global financial crises past and present, Reinhart served as vice president and chief economist at World Bank Group from 2020 to 2022. Interview has been edited for clarity and length.

GAZETTE: U.S. Treasury Department began taking “extraordinary measures” last Thursday to keep paying the nation’s bills. Secretary Janet Yellen warned Congress earlier this month that this would happen and that if members fail to reach a deal on raising the debt ceiling by early June the country would risk falling into default. How do you interpret that statement?

REINHART: The debt ceiling is a recurring issue. This happens every so often, sometimes with drama, sometimes without drama. So, I don’t read anything into it. Ultimately, nobody’s going to hold back and have a default. The debt ceiling increase will be approved, and we will continue on our way as we have many times before. This is not an extraordinary event.

GAZETTE: The latest Consumer Price Index report showed U.S. inflation rate at 6.5 percent in December, falling to its lowest level in over a year, which marks six straight months of deceleration, while core inflation was also down, at 5.7 percent. In the E.U., inflation is also trending downward the last three months, hitting 9.2 percent in December from 10.1 percent in November, and 10.6 percent in October. Many are eager to find signs for optimism. How much should we read into these numbers?

REINHART: I think the markets are getting ahead of themselves. Goods price inflation really spiked with the commodity price increases, with the oil price increases. It’s come down. That’s very comforting. But at the same time, sticky price inflation, which is services, wages, things that don’t jump around a lot, have been hitting 40-year highs. That’s what’s been driving both the big pickup and the subsequent decline. The steady, creeping increase in sticky goods prices is something that Fed Chairman Jerome Powell and John Williams, president of the New York Fed, in speaking to what the Fed is looking at, have highlighted. The inflation challenge is still with us. Sticky goods prices are still at their highest level on a 12-month basis since 1982. So, the inflation picture relative to, let’s call it the “wartime shock” of the pandemic, has improved in the U.S.

Globally, it’s mixed: Some countries are doing better; others are doing worse. Within the Eurozone, as you pointed out, it has decelerated. Spain had inflation that spiked over 10 percent; now, it’s down to a shade under 6 percent. But Italy is now at 11-plus percent, so it’s actually gotten worse.

The deceleration in commodities and oil, the strength in the dollar, have all helped U.S. inflation, goods price inflation to come down. But there are challenges that remain — the labor market is still pretty strong, which the Fed has flagged, and sticky price inflation is still going strong, so I think it’s premature to start anticipating — the way financial markets are prone to do — that the Fed is going to be in a position to cut rates very soon. No Federal Reserve voting member indicated a willingness to cut rates in 2023. Positive reaction is warranted; over-optimism is not. I think they are underestimating what it will take, how long it will take, to get inflation down. I mean, when 6.5 percent looks like good news when we had a 2 percent target, that tells you how much the mentality has changed.

The optimists look for soft landings, but if you look at the history of the Federal Reserve and at what’s happened to the economy during periods of tighter monetary policy, we’ve only had one soft landing and that was in the mid-1990s. Inflation was only 3 percent, so the amount of tightening required was not comparable to today. Historically, soft landings have been few and far between.

GAZETTE: Lower-than-expected energy prices recently have helped to slow inflation in Europe. Which factors will be most determinative of the direction that inflation and the economy overall head in this year?

REINHART: The prices of services and wages are stronger. Also, wage growth has been moderated. But we have to see signs that sticky goods inflation begins to decelerate. The invasion of Ukraine not only impacted oil but the wheat market. Food prices have skyrocketed. So more good news on either energy or food is always welcome, but the war is still going on. China is poised to recover from its exit from Zero COVID policies and that recovery in China could boost commodity prices again.

GAZETTE: The International Monetary Fund predicts 2023 will be a tough year for growth around the world. The World Bank just revised its global growth forecast from 3 percent in June to 1.7 percent, saying the global economy is “perilously close to falling into a recession.” What are they seeing that gives them concern?

Where the risk of recession among the advanced economies is the most visible is in Europe. The Russia-Ukraine war dealt a major blow to the structure of energy use and energy imports to most European economies, and they have been scrambling. The result has been the inflation pops we’ve discussed and also a negative impact on economic activity, and oil shocks not unlike the 1970s for them. So, Europe is deeply vulnerable, and depending on what indicators you look at, you could argue they’re in recession already. Japan is hanging in there. Among the advanced economies, the weakness is definitely concentrated in Europe more so than the U.S. and Japan.

Importantly, a lot of their borrowing is variable rate debt, so the interest rate increases that we’ve seen impact them right away. So, emerging markets and developing countries are in a period of high vulnerability. The poorest countries, the 73 or 74 countries eligible for the World Bank’s Debt Service Suspension Initiative, more than 60 percent are either in debt distress or at high risk of debt distress, according to the IMF and World Bank. So, unlike the aftermath of the global financial crisis, where the emerging markets and China were a big engine of growth, we don’t have that now. China will be a question mark. On a sustained basis, I think the era of very high growth is behind them.

GAZETTE: Aside from China’s reopening and the war in Ukraine, are there other types of events or geopolitical scenarios that could reshape the course of the global economy this year?

REINHART: What happens with Taiwan and China — that is huge. Russia-Ukraine divided the world into three — those that were supporting Ukraine, those that were supporting Russia, and those that kind of stood on the sidelines. If China were to invade Taiwan — this is not a prediction — the financial market consequences would be enormous because of the implications for potential sanctions on China. China, let us not forget, is one of the largest holders of U.S. Treasury securities, so that’s a real tail risk.

Other geopolitical factors: There are periodic concerns, understandably so, of a greater pendulum swing toward more populism and that is evident in both advanced economies and emerging markets. That can really complicate trade, assessment of risk, all kinds of ramifications. Another risk that encompasses both economic and geopolitical is Turkey. Turkey has been having problems for a long time. They’re off to the races on inflation and have a very anti-West government. This is not my baseline prediction, but if Turkey were to have a crisis, the impact on Europe would be quite significant. Not only because a lot of European banks have exposure to Turkish firms, but also Turkey is the stopgap of the immigration flowing into much of Europe, and so if they were to say, “We can’t deal with this. Pass right along into Europe,” that would have consequences.