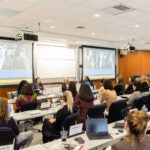 Eligible voters can vote for new members during April-May elections

The elections will begin March 31. Eligible voters can vote either online or by paper ballot. Completed ballots must be received by 5 p.m. (EDT) on May 16. All holders of Harvard degrees as of Jan. 1, except officers of instruction and government at Harvard and members of the Harvard Corporation, are entitled to vote for Overseer candidates. All Harvard degree holders as of Jan. 1 may vote for HAA elected directors.

The candidates listed below (in alphabetical order) have been named by the nominating committee appointed by the Harvard Alumni Association’s volunteer leadership.  They will be considered by voters for five anticipated vacancies on the Board of Overseers and for six openings among the HAA elected directors.

The HAA nominating committee has proposed the following candidates for the 2023 election:

Arturo Elizondo
A.B. ’14
San Francisco
Arturo Elizondo is co-founder and CEO of The EVERY Company (formerly Clara Foods), which seeks to unlock the potential of animal-free proteins.

Vanessa W. Liu
A.B. ’96, J.D. ’03
New York, New York
Vanessa Liu is founder and CEO of Sugarwork, a software company that enables flexible work and knowledge transfer, and a past president of the Harvard Alumni Association.

Candidates for Overseer may also be nominated by petition by obtaining the required number of signatures from eligible voters. The deadline to submit petitions for the 2023 Overseers election is Feb. 1. More information on the nomination and election process appears at elections.harvard.edu/elections-process.

The HAA nominating committee has proposed the following elected director candidates for the 2023 election:

The above candidates for both Overseer and HAA elected director emerged from this past fall’s deliberations of the alumni-led HAA nominating committee. The committee’s voting members include 13 alumni, broadly diverse in their backgrounds and experience, who are appointed by the HAA’s volunteer leadership. Among the committee’s members are three current or recent Overseers, who bring direct knowledge of the workings and needs of the Board.

The nominating committee selects candidates through extensive deliberations conducted in a series of meetings each fall. In formulating its slates , the committee reviews materials about hundreds of prospective candidates suggested by alumni and others in the Harvard community.

In developing a diverse slate of Overseer candidates, while taking account of the Board’s present composition and the University’s future needs, the nominating committee considers candidates with prior board service and an understanding of complex organizations; experiences and accomplishments in an academic or professional domain; a broad interest in and concern for higher education, including the interests of Harvard and the general quality and ongoing development of its education and research mission; a commitment to investing the time and energy required for effective service; and the ability to lead as well as to build consensus.

The Board of Overseers is one of Harvard’s two governing boards, along with the President and Fellows, also known as the Corporation. Formally established in 1642, the board plays an integral role in the governance of the University. As a central part of its work, the board directs the visitation process, the primary means for periodic external assessment of Harvard’s Schools and departments. Through its array of standing committees, and the roughly 50 visiting committees that report to them, the board probes the quality of Harvard’s programs and assures that the University remains true to its charter as a place of learning. More generally, drawing on its members’ diverse experience and expertise, the board provides counsel to the University’s leadership on priorities, plans, and strategic initiatives. The board also has the power of consent to certain actions such as the election of Corporation members. The current membership of the board is listed here.

The HAA Board, including its elected directors, is an advisory board that aims to foster a sense of community, engagement, and University citizenship among Harvard alumni around the world. The work focuses on developing volunteer leadership and increasing and deepening alumni engagement through an array of programs that support alumni communities worldwide. In recent years, the board’s priorities have included strengthening outreach to recent graduates and graduate school alumni; supporting antiracism work in alumni communities; and continuing to build and promote inclusive communities.