Why elephants have bigger bones 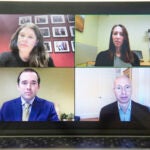 Before the 1970s, about 25,000 premature babies died each year from a disorder called respiratory distress syndrome. Patrick Bouvier Kennedy, the infant child of President John F. Kennedy and Jacqueline Kennedy, was one of them. But in the decades since, that number plummeted to just 400 deaths per year.

“So how did this massive decline happen?” Raghuveer Parthasarathy asked last week during a virtual Harvard Science Book Talk presented by the University’s Division of Science, Cabot Science Library, and Harvard Book Store. “The answer,” he continued, “has to do with lungs and liquids.”

Or really, the answer came from merging the science of lungs and liquids through the relatively young field of biophysics, the child of biology and physics and the subject of Parthasarathy’s new book, “So Simple a Beginning: How Four Physical Principles Shape Our Living World.” In it, Parthasarathy explores how universal physical rules shape all life on Earth, answering questions like why elephants need such big bones, how birds fly and bacteria wriggle, and why respiratory distress syndrome has declined so rapidly.

Think of lungs as being sort of like balloons covered in watery mucous, said Parthasarathy, a professor of physics at the University of Oregon. They have the volume of a few tennis balls, but the surface area of an entire tennis court because of all their many airways and tiny expandable air sacs. These sacs, called alveoli, are where oxygen and carbon dioxide are exchanged when we breathe in and out.

All that tissue is steeped in water. And, because of one of the physical rules governing our universe, water molecules hate to be on surfaces — which is the problem. As water molecules all try to get as far away as possible from a pond’s surface, for example, that creates enough tension for insects, like water striders, to glide around on top. But as these molecules pull away from the surface of a premature baby’s lungs, they can collapse their tiny air sacs.

And yet, soap, Parthasarathy said, loves surfaces. To demonstrate, he floated a paper clip on top of a glass of water — a feat made possible because of the water’s surface tension. Parthasarathy then dropped in some dish soap; the surface tension disappeared; and the paper clip sank. So, he said, all the premature infants needed was a little soap — or rather, the soap-like molecule called a surfactant — that all humans make after 26 weeks of fetal development. That solution, Parthasarathy said, was not complicated. Once doctors understood the physics of liquids, they could understand the biology of breathing.

“It’s an exquisite dance to find out which details matter and which inspirations explain the problem,” said Philip Nelson, a biophysicist at the University of Pennsylvania, who joined the virtual conversation to discuss Parthasarathy’s new book.

Both lamented the lack of awareness of the field of biophysics. (Parthasarathy said he recently gave a talk called “Biophysics Exists.”) The duo also discussed the four physical principles Parthasarathy chose to include in his book. The first, self-assembly, refers to the innate ability of things — like materials, molecules, or cells — to construct intricate patterns (surfectants are an example of this). Proteins fold themselves into origami shapes. Soap bubbles and the eyes of flies both form beautiful, complex structures all on their own. “Biology is the master of self-assembly,” Parthasarathy said.

The three other principles are: regulatory circuits — or things, like DNA, that take in information and make decisions; predictable randomness — Parthasarathy’s favorite and the reason we can predict someone’s height from analyzing hundreds of genes (but can’t say exactly which genes are responsible); and scaling. Scaling is why elephants need far bigger bones than sparrows. Gravity, a physical law, pushes down on an elephant’s bulk. Big bones help the animal withstand that pressure.

These four principles might explain why life, from microscopic bacteria to bulky elephants, takes such diverse forms. But humans can also manipulate these rules to build tools. For example, scientists can now perform gene sequencing with an unraveled string of DNA.

“Sounds like total science fiction,” said Nelson, “but now you can buy it.” And, he continued, “A lot of us are alive today because of a vaccine from a category that didn’t exist a few years ago. And a lot of those insights came from nature.”

Parthasarathy, who illustrated his book with his own watercolor paintings of “exquisite” biology, also fielded questions from the virtual audience on, for example, why he chose only four principles (more felt like “too much of a hodgepodge,” he said), whether evolution could be another unifying principle (it’s more of a pathway to navigate the rules, he said), and whether free will exists if physical laws govern all life. That question used to keep him up at night, Parthasarathy said. “I’m kind of OK with everything in our consciousness having to do with physical property. In other words, not having free will.”

Another audience member asked if biophysics could explain so much of biology, whether life would still have any mystery a decade from now. “Yes,” Parthasarathy said. We still don’t understand how organs grow to different sizes, how embryos form, or why both our arms end up the same length.