Princess makes most of Harvard visit 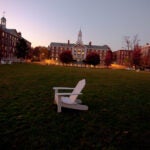 Biography of a place

Connects with scholars to discuss partnership around early childhood development

Catherine, the Princess of Wales, stopped at Harvard’s Center on the Developing Child on Friday as part of a visit to the Boston area with her husband William, now Prince of Wales and second in line to the throne behind his father, King Charles III.

The couple arrived in Boston on Wednesday. They traveled to the city to award the second annual Earthshot Prize — founded by the prince and given by the Royal Foundation of the Prince and Princess of Wales to innovators working on climate change solutions — in a ceremony Friday night.

The prince noted during the trip that he was inspired by President Kennedy’s 1962 “moonshot” speech and subsequent space exploration efforts. Kennedy’s example was one of the key inspirations in bringing the prize to Boston, according to the prince.

“Boston was also the obvious choice because your universities, research centers, and vibrant start-up scene make you a global leader in science, innovation, and boundless ambition,” he said at a City Hall kickoff event.

In addition to joining the Earthshot celebration as a member of the Boston Host Committee, Harvard welcomed the princess to campus for a discussion on childhood development.

Last year, the prince and princess announced that their foundation would be branching out to create an early childhood center that aims to “drive awareness of and action on the extraordinary impact of the early years, in order to transform society for the future.”

The princess, who spearheaded the creation of the center, used her time on campus to meet with Harvard experts, including Jack Shonkoff, director of the Center on the Developing Child and the Julius B. Richmond FAMRI Professor of Child Health and Development at the Harvard T.H. Chan School of Public Health and Harvard Graduate School of Education. Gillian Najarian, managing director of the Center on the Developing Child, Lindsey Burghardt, chief science officer of the center, and Tassy Warren, the center’s deputy director and chief strategy officer, also participated in the roundtable discussion, as did David R. Williams, Florence Sprague Norman and Laura Smart Norman Professor of Public Health and chair of the Department of Social and Behavioral Sciences at the Chan School.

The royal center’s first major publication, “Big Change Starts Small,” which appeared in June 2021, was written in collaboration with Center on the Developing Child scholars and experts from the London School of Economics. The report combined findings on the importance of early childhood development with data on how well the country is meeting those standards.

Shonkoff noted that this approach — letting data inform the work — seems to represent a guiding principle of the princess’ efforts. It’s also the mission of his nearly two decades of work at Harvard.

“They definitely want to be informed by the best science they can get their hands on,” he said. “We see ourselves as a critical bridge between rigorous, no-nonsense cutting-edge science and on-the-ground application.”

Shonkoff founded the Harvard center in 2006 with hopes of educating policymakers and building support for early investment in childhood development. Over time, the center has become increasingly research-based, attempting to shape innovations for improved outcomes based on the early years of a child’s life.

The princess, in her founding letter last year, pointed to inequity as being of keen interest to the royal center’s work.

“When first undertaking royal duties a decade ago, I started meeting inspiring people who were rebuilding their lives from challenges such as addiction, homelessness, violence. . . . Spending time together and hearing more about their lives, I was struck by how often poor mental health but also early childhood was the focus of our conversation,” she wrote.

Her letter continued, “It became clear that if we want to build a happier and mentally healthier society then one of the best investments we can make is in the relationships, environments, and experiences that make up our early childhoods.”

Shonkoff added that he hopes the prince and princess’ involvement in the issue will help advance the work of early childhood scholars.

“The extent to which we can leverage both these platforms is very exciting,” he said.