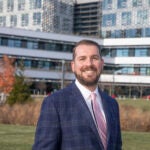 At a meeting of the Faculty of Arts and Sciences on Dec. 6, 2022, the following tribute to the life and service of the late Jene Andrew Golovchenko was spread upon the permanent records of the Faculty.

Jene Andrew Golovchenko, Rumford Professor of Physics and Gordon McKay Professor of Applied Physics, died on Nov. 13, 2018, at the age of 72. He was a uniquely creative scientist and an extraordinarily good mentor, and the breadth and depth of his contributions are truly astonishing.

Golovchenko was born in the Bronx, New York. His interest in the technical sciences was catalyzed during childhood through ham radio work with his father. After Golovchenko enrolled at Stuyvesant High School, he became part of a team of students tasked with building a small accelerator. This would be a life-altering experience. He majored in electrical engineering at Rensselaer Polytechnic Institute, but realized he really wanted to pursue physics. During his time in Troy, NY, he met Beth Catricala, whom he married in 1967.

During graduate school, a serious issue arose for Golovchenko as funding for his Ph.D. project disappeared. Dr. Walter Gibson came to his rescue and invited him to work on a project at Bell Labs. Golovchenko and Bell were a match made in heaven and this posting was arguably the single most important event in his career. With Gibson, Golovchenko studied the channeling of charged particles in single crystals, where particles are steered through the crystal along planar or axial directions — a topic of great importance to Bell Labs. In his graduate work, Golovchenko developed a clever method to measure the effective potential governing the motion of channeled particles. He also delivered technical, educational lectures at NASA as a graduate student.

Golovchenko became a tenured associate professor at Aarhus University in Denmark, which allowed him to pursue his newfound interest in X-ray standing waves. During his time there, he also performed high-energy channeling experiments at CERN in Geneva — an experience he loved. Eventually, he was enticed to return to Bell to continue the X-ray work there.

Golovchenko used interference between incoming and Bragg reflected waves and X-ray-induced fluorescence to localize defects in materials with a precision of 0.02 angstrom, which was unprecedented. Combining this technique with his other discovery of X-ray evanescent wave emission, he could selectively study impurities localized at the surface of a material.

Thus started Golovchenko’s journey into surface-science, which would continue with the invention of the scanning tunneling microscope (STM). The technical parameter space for the STM was not really known at this time, so much had to be developed by Golovchenko and his team. His deep understanding of physics and his love of engineering led to the creation of the first functional STM in the United States, which was of superior design and which enabled the first true surface-science experiments with this new instrument.

Golovchenko published a series of highly influential papers, reporting observation of novel reconstructions — novel patterns of atoms on a surface — and of clear phase boundaries between different reconstructions. He observed atomic terraces on a surface separated by steps a few atoms high and measured electronic surface states correlated with spatial positions on the surface. These observations were of fundamental importance for understanding catalytic processes and the growth of crystals on the atomic scale.

Golovchenko and his team successfully carried out the first manipulation of atomic bits on a surface. Using an STM tip to move just a few atoms at a time from one part of a surface to another, he could sculpt the material’s surface atom by atom.

In 1987, Golovchenko arrived at Harvard, and soon thereafter became connected with the Rowland Institute. At Harvard and Rowland, Golovchenko continued his surface work, in collaboration with Chen and Bedrossian. He also worked on a plethora of other novel discoveries, including optical matter (with Burns), cold-atom waveguides (with Hau), low-temperature molecular beam epitaxy (with Evans, Dubon, and Spaepen), whispering gallery modes for X-rays on curved surfaces (with Liu), and direct detection of the nucleation of nano-bubbles (with Nagashima, Levine, and Burns). In recent years, Golovchenko pursued new methods for rapid DNA sequencing with solid-state nanopores (with Li, Stein, Gershow, Hoogerheide, Branton, and Aziz). The problem of creating nano-sized holes with controlled size and topography was solved by inventing a new method, “ion sculpting,” which, in turn, involved the discovery of novel surface dynamics at the atomic scale. This new method led to the first controlled and measurable translocation of DNA through nanoscale holes in solid-state membranes.

Golovchenko was constantly thinking about new ideas and he could get so excited that he would delightedly exclaim, “This idea is so crazy, it just might work!”  He was incandescent with an infectious joy and enthusiasm. He was a kind and sharing mentor to his students, and he always emphasized the power of a great question. Those of us who were lucky enough to work with Golovchenko knew that the experience would be unpredictable and exciting. He was a bold scientist, and his message to his proteges was, “If you do an experiment, tune for maximum smoke.”

Golovchenko had a formidable intellect. He was an experimentalist with deep theoretical knowledge, and for every topic he worked on — be it research or teaching — he would bring his own unique perspective that would inevitably result in novel insights. He could regularly be heard improvising on the piano and, later, the keyboard, which offered new possibilities with its digital interface.

In 1994, Golovchenko helped reinvigorate the Harvard Freshman Seminar Program by creating a new seminar called “The Physics and Applied Physics Freshman Research Laboratory,” which became legendary. Freshmen would work in teams to design and build new projects from scratch. It was a genuine research experience, and Golovchenko built a dedicated laboratory for the class. Many projects were chosen over the years, including the building of a Stirling engine and a music-themed set of explorations of physics and performance. Over the two-decades span of the seminar, Golovchenko taught and inspired generations of freshmen, and many former students from the class have gone on to great careers in science.

Golovchenko is survived by his wife, Beth; their children Peter, Eric, and Katya; and six grandchildren.