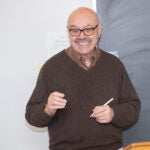 Behind the data, a teacher who left his students transformed

Two headed to England, one to Ireland to take deeper dives into concentration disciplines

Three Harvard seniors will be heading to England and Ireland in the fall after being awarded Rhodes and Mitchell scholarships. International students Marcus Montague-Mfuni and Sílvia Casacuberta Puig will join six other Harvard seniors in October at the University of Oxford to pursue degrees. Meanwhile, newly minted Mitchell Scholar Michael Frim will head to University College Cork to continue his studies in Celtic civilization.

Burst of happy phone calls after roller-coaster ride of uncertainty

Montague-Mfuni can only compare being named a Rhodes Scholar to learning he had been accepted to Harvard. “It doesn’t feel real,” the 21-year-old said. Days after receiving the scholarship, he said the news was still settling in.

As part of the process, Montague-Mfuni had to return home to South Africa for his interviews. The roller-coaster of uncertainty put him through “three stages of grief” before he learned he was one of four South Africa-at-large recipients. “I think my immediate reaction was to laugh on the phone,” he said. Once it hit him, he immediately called family and friends in the U.S. to share the great news.

At Harvard, Montague-Mfuni, who lives in Dunster House, conducts research at the Moral Psychology Research Lab, looking at questions involving oppression, discrimination, and stereotyping. He hopes to continue that research at Oxford by building up his data science and public policy skills. His goal is to eventually pursue a Ph.D. in social psychology and continue researching human behavior.

Outside of his academic work, Montague-Mfuni is president of the Harvard South African Society. He previously served as the chair of diversity and inclusion at The Crimson and still writes op-eds for the publication.

Puig feels grateful for the outpouring of love and support from friends and family she’s received since winning a Global Rhodes Scholarship. “It has been really nice to share this moment with the people I love the most,” she said. “I never considered it an actual possibility. Statistically, it just seemed absolutely impossible.” The 22-year-old Dunster resident said that although the prestigious scholarship is not well known in Spain, her parents are very proud.

Heading to Oxford in the fall will set Puig off on a new adventure closer to home after spending five years away. She hopes to continue her studies in theoretical computer science, a discipline at the intersection of math and computer science. Her work has been influenced by her two senior thesis advisers, Salil Vadhan, Vicky Joseph Professor of Computer Science and Applied Mathematics, and Cynthia Dwork, Gordon McKay Professor of Computer Science and Radcliffe Alumnae Professor at the Radcliffe Institute for Advanced Study.

Puig is also looking forward to exploring the orchestra scene at Oxford. A violinist, she plays in the Harvard Baroque Orchestra, Mozart Society Orchestra, and the Harvard College Opera. Besides her music, Puig has served as co-president of Gender Inclusivity in Mathematics, co-academic director of Women in Computer Science, and president of Circle of Women.

She hopes her Rhodes will encourage others to apply to scholarships and fellowships, even if it is not initially in their plans. Puig decided to apply in July and said she feels American students often plan things too much. “I think you have to plan things, but it’s really important to allow some randomness,” she said. “Just do what feels right to you.”

Eager to explore archaeological sites and do more conventional sightseeing


Frim is brimming with excitement as he considers his upcoming year in Ireland, where he will pursue a master’s degree at University College Cork.

His love of Irish literature and archaeology and Celtic studies began when he enrolled in a medieval Welsh course in the Department of Celtic Languages and Literatures. That led him to more classes in the field and eventually to dedicate his senior thesis to Irish archeology. In Cork, Frim will study early and medieval Celtic languages and engage with literature and manuscripts in medieval Welsh and Irish.

Like Puig, Frim learned he’d been named a Mitchell Scholar following the Harvard-Yale game last month. After pumping his fist in the air a few times, the Elliot House resident immediately began to call his friends and family, who had supported him during the interview process.

“I was really nervous going into some of the interviews, and they were really helpful,” he said. “It’s a very calming presence being able to call them and say, ‘I’m really nervous, what do I do?’ and then spending multiple hours talking about what I’m going to be studying, what sightseeing sites there are.” Frim is looking forward to visiting the “Deck of Cards” houses — a famed row of colorful Victorians — near Cork and exploring archaeological sites around Ireland he missed while there during a summer spent working at an archaeological field school. 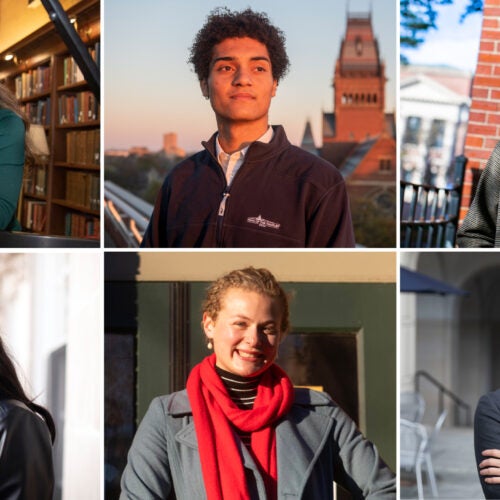