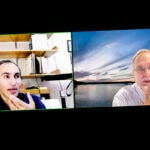 Why elephants have bigger bones

More than 330 million years ago, when fish-like creatures started growing legs and taking their first steps on swampy land, they started on a new Darwinian path in the general direction of humanity. But even across that chronological gulf, the fossils of these early animals, called tetrapods, can teach us about our own human bodies, specifically why we grow relatively quickly while other animals, like today’s amphibians, plod along at a slow and steady pace. Salamanders, for example, live as fish-like tadpoles for years before going through metamorphosis to emerge as juveniles where they’ll stay for another 2-3 years.

“Our strategy, not just as humans, but as mammals, is to grow really fast and then reach adult size and slow down,” said Megan Whitney, a former postdoc in Pierce’s lab who is now an assistant professor of vertebrate paleontology and paleohistology at Loyola University. “That strategy was thought to be specialized.” Now, according to new research, humans might not be as special as once thought and the resulting insights might help begin to explain how and why some animals developed a distinct evolutionary advantage on land.

The study was published in Communications Biology by Pierce and Whitney with help from Benjamin Otoo and Kenneth Angielczyk from Chicago’s Field Museum of Natural History. The museum is host to a “giant treasure trove,” as Pierce put it, of fossils from a specific kind of tetrapod known as Whatcheeria. That species was previously thought to be among those that grew slowly and steadily. But, by studying the bones of these ancient creatures, the team discovered that at least some of these croco-salamanders were growing much faster than expected, which may have helped them fulfill the role of an apex predator or even use their stocky legs to make that legendary crawl out of the sea and onto land.

“The water/land transition in tetrapods is one of the icons of evolution,” said Angielczyk. But fish didn’t just sprout legs and crawl on shore; that transition was far from smooth. Some of these early creatures might have evolved sturdier legs that let them both plow through swamps and swim. “There was this burst of experimentation that happened, and some of those experiments worked, and some didn’t,” Angielczyk said.

Judging from Whatcheeria bones, this evolutionary experimentation looks like a mosaic, Pierce said, with some parts of the skeleton seemingly better suited for land and other bits designed for water. That hodgepodge can make it challenging — but also incredibly valuable — to study these animals, which were perched midway through one of the most important evolutionary moments in our lineage. Unlike biologists studying modern animals, Pierce and her team cannot observe Whatcheeria in their natural habitat. To understand how these creatures lived and adapted to a new land-based environment, they search for clues in their bones. And one clue — growth rate — suggests much about how an animal lived and survived.


Today, mammals, including humans, birds, and reptiles, all grow relatively quickly from a young age, careening toward adulthood as if their lives depend on it — and in the wild, they often do. This is a super-specialized trait, honed over millions of years of evolutionary tinkering, which is why Whatcheeria, one of the earliest tetrapods and so closer to that moment when fish sprouted legs, were assumed to be far older than that trait.

“We have this idea that these animals should be growing slow and sluggish,” said Whitney. “We think of that as being the ancestral state for animals. So, to find it so far back in our family tree is totally surprising.”

Whitney was the team’s expert histologist; she examined the bone specimens for evidence (or, as Pierce put it,  she read them “like a storybook”). Together, the team looked at four different stages of development: juvenile, subadult, adult, and skeletally mature adult. That’s when they noticed something peculiar: Juveniles had fibrolamellar bone, a fast-depositing type present in animals with accelerated growth rates. In addition these bones had no lines, which typically indicate periods of slowed growth. So it appears that young Whatcheeria grew through seasonal changes — dark and cold to bright and hot — which often force animals to pause their growth.

For Whatcheeria, being weird was probably beneficial. Because it was likely the biggest predator in its ecosystem, growing quickly probably helped it thwart rivals, giving it a better shot at surviving to sexual maturity and reproducing. Pierce speculated this elevated growth rate could have helped the species survive environmental changes or even mass-extinction events.

As any human parent knows, to grow fast, animals must eat — a lot. Without a steady source of calories, the animal would struggle. And not all early tetrapods or their ancient cousins found themselves on the speedy route. “There was a diversity of animals living during the Devonian and early Carboniferous periods,” said Pierce, “and each had their own strategy for growing and living within their environment.”

That shouldn’t be surprising given the vast diversity of life on Earth today. But Pierce is still curious to learn more about this early diversity and why the fast-growing Whatcheeria took the road less traveled.

“Is Whatcheeria the exception?” Pierce asked. “Or was this a strategy that many more animals were using?” Because 330-million-year-old fossils are hard to come by, that question is difficult, if not impossible, to answer. Even the Field Museum’s Whatcheeria cornucopia is limited. Pierce and Whitney can gather evidence from synchrotron and microcomputed tomography scanning, which preserve the specimens. But some bones hide their secrets unless sliced and examined under a microscope.

“It’s an extremely valuable source of data for animals that have been dead for a very long time,” said Whitney. “A way to bring them back to life.” And, in so doing, to better understand our own.