When agreeing to disagree is a good beginning 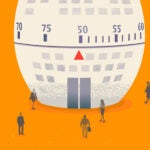 Disagreements don’t have to end discussions. In fact, as researchers from the Harvard Kennedy School and Harvard Business School discussed on Wednesday, engaging with those who hold opposing views can be constructive and lead to new discoveries and new allies.

“Many of us look at conflict as something we’d rather avoid than engage in with confidence,” explained Francesca Gino, Tandon Family Professor of Business Administration in the Negotiation, Organizations, and Markets Unit at Harvard Business School during the streaming event. “But conflict and disagreement can be quite beneficial.”

Gino was joined by Julia Minson ’99, an associate professor of public policy at the Kennedy School who researches the psychology of disagreement at the Minson Conflict and Collaboration Lab, for “How to Engage in Productive Disagreement.”  The event was sponsored by the Office of the Vice Provost for Advances in Learning and the Harvard Alumni Association.

The business professor opened the evening with an example of such constructive sparring. Sharing video of the Pixar creative team discussing their heated arguments over the creation of the film “Toy Story,” she broke down the elements of what this team had been able to do.

“What stood out to Julia and myself is you hear about these intense disagreements and people coming out and saying, ‘That was an amazing discussion,’” said Gino, who is also affiliated with Harvard Law School’s Program on Negotiation. “What was it that they figured out that allowed for disagreement to be productive? What can we all do so that disagreement turns out to be productive rather than damaging?”

“Many of us look at conflict as something we’d rather avoid than engage in with confidence. But conflict and disagreement can be quite beneficial.”
— Francesca Gino, Harvard Business School

Key, the researchers found, was honest and opening listening that incorporated “receptiveness to opposing views,” Minson said. She defined this characteristic as “the willingness to access, consider, and evaluate supporting and opposing views in a relatively impartial manner.”

That means, she said, listening as intently to ideas from the opposing side as you would your own. “You can’t just say, ‘I listened to it and it’s stupid,’” she cautioned. Nor can you listen only “to find the flaws in the argument.”

This requires some discipline, both researchers acknowledged. “It’s hard, and it’s uncomfortable to recognize that there is a different viewpoint,” said Gino. The challenges have only grown in recent years, Minson added. “Arguments have become more accusatory and more emotional,” she said. She blames social media. “It’s become so much easier to surround yourself with people who agree with you. Now you can go online and create your own little universe of people who think just like you. It makes it that much harder to exercise that muscle of engagement.” (To find how receptive you are, take their quiz at receptiveness.net.)

This elusive quality is worth pursuing, Minson said. She described a study at the Kennedy School executive education program that paired attendees to discuss controversial topics and then asked them to rate their partners’ receptiveness. “What we saw was interesting and hopeful,” said Minson. “The more receptive people saw their partner as being, the more they wanted to work with them.”

Key to these perceptions, the researchers found, was language. Using a language-processing algorithm designed by Imperial College Business School Assistant Professor Michael Yeomans (then a HBS postgrad), the executive group’s discussions were analyzed and certain types of words and phrases stood out. In particular, people responded to negation (“no”) and reasoning language ( “the reason is …” or “because”) negatively, while viewing acknowledgment (which Minson described as “using some of your airtime to restate the other person’s opinion”), hedges (“it could be …”), second-person pronouns, and agreement positively. That last, the researchers stressed, did not have to mean capitulation to an opposing view.

Discussing whether schools should close or remain open during a COVID outbreak, for example, a receptive person could say, “We both agree we want our children to be safe and get an excellent education,” said Minson. Finally, expressing a positive emotion also played a role in how the speaker is perceived.

Focusing on the elements that contributed to being viewed as receptive, Minson offered the acronym HEAR (hedging, emphasizing agreement, acknowledging, and reframing the positive). “Using this language has positive outcomes,” she said. Not only does it make other people want to work with you, she said, “it also makes the other side more receptive.”

In other words, “even when the other side seems to be combative and not receptive,” Gino said, “this approach can be contagious.

“If your intent is to persuade the other side, this is a more productive and effective approach,” she said.

That does not mean being receptive to opposing viewpoints is easy. “I’m always surprised by how much patience this takes and how hard it is to execute when you’re angry or tired,” Minson said. However, for these researchers, the conclusion is clear: People have more positive interactions if they believe the other person is receptive and truly wants to learn.