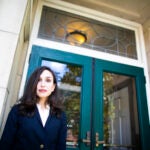 Ben Allen was looking for ways to stay physically active under strict COVID restrictions when he first came to Harvard in fall 2020 after retiring early from the Navy due to a medical condition. Fellow Greenough Hall resident and Israeli veteran Elianne Sacher, who had played rugby for Israel’s national team and was on Harvard’s women’s team, introduced him to the game.

“We passed a ball around,” Allen said. “We’d do tackling drills behind Greenough and run around, just to stay in shape.” Some classmates saw their workouts and told Allen about the men’s rugby club. When the fall of 2021 brought a return to relative normalcy, he found a home there.

Allen, who worked as a nuclear mechanic in the Navy, is among the small but growing number of military veterans in the College’s undergraduate community — this year’s count is 59 — and one of several who have found connectivity on the rugby pitch.

“It doesn’t matter that you come from this background, or if you’re in that social group or this club. When it’s go time, you all come together,” said the Currier House resident, a native of suburban Chicago. “You won’t be a cohesive unit unless you can come together on the pitch and off, and the parallels between the military and rugby in that sense really stood out to me. … And I also just love the guys.”

Among them are first-year Aaron Rosales, who served eight years in the Marine Corps, and sophomore Nick Ige, who did six combat tours in Afghanistan with the Army’s 75th Ranger Regiment.

“Rugby is a small team, working together, to overcome a problem physically … which is very similar to what a combat team in the military boils down to.”
— Nick Ige ’25

“There are a lot of similarities to the Marine Corps, where you rely on somebody to the left or the right of you,” Rosales said. “It’s very difficult to find a similar camaraderie in organizations out in the civilian world, to build those types of bonds that give you that sense of love, that family, that structure. You immediately feel like people have your back.”

Rosales is a 33-year-old native of El Centro, California, whose wife, Christina, and 9-year-old daughter, Audreyana, remain on the West Coast while he currently resides in Canaday Hall. Having experienced the camaraderie of the military, being older and with more life experience than many of his classmates, rugby has helped him find a place on campus.

During the acceptance process, he connected with the Harvard Undergraduate Veterans Organization (HUVO) through the nonprofit Service to School, and asked what vets do socially on campus.

“Well, the guys play rugby,” vets at HUVO told him.

Like Allen and Rosales, Ige had no previous experience with the game. In a given year, there are anywhere from four to eight vets competing on the active roster. A native of Hilo, Hawaii, and recipient of the Bronze Star with valor for his service, Ige started Harvard as a first-year at age 29, following his last deployment in 2020 and a brief COVID pause. He heard the rugby club’s great reviews, thought it looked “really cool,” and ended up on the active roster for the fall 2021 season, before sitting out this year to focus on Dagger and Book, an organization promoting student mental health through friendship and adventure that he co-founded with another veteran at the College.

“I truly believe that the rugby team — both the men’s and women’s — is the hidden gem here at Harvard.”
— Aaron Rosales ’26

“In the military, the Special Operations community I was in was a very small, tight-knit group, and [when I got here] I felt like I had been removed from my tribe,” Ige said. “Most people here don’t have the context to begin to understand what that’s like. Rugby is a small team, working together, to overcome a problem physically … which is very similar to what a combat team in the military boils down to. I saw a lot of parallels between those two things, and that’s what pulled me into it.”

A Cabot House resident, he also felt something familiar in the community. “The rugby culture also really drew me. It’s a little more brash. I was looking for people who like to work out, who like to talk trash, and who like to drink beer,” he said. “We run into each other at full speed, fighting over a weirdly shaped ball. However, at the end of it, we always all come together and have a beer. It’s a hooligan game played by really good dudes.”

Allen believes in the rugby/vet connection so much he became its top recruiter. “I try to bring as many vets as I can,” he said. “Some stayed; some have gone. Some have gone and come back. I’m passionate about making sure that there’s not a single vet on our campus who struggles and feels like they’re out there alone. Rugby is the perfect place to invite them in.”

“It doesn’t matter if you’re short, tall, big, lean, or if you’re Black, Latin, white,” Rosales added. “I truly believe that the rugby team — both the men’s and women’s — is the hidden gem here at Harvard. A lot of people who are missing that connection and that bond, it’s the place where they find it. I’ve talked to other veterans about how they’re enjoying different clubs or activities, and it’s nowhere near the experience of the rugby team and that feeling of family. If you come out for the team, you’re wearing that H on your chest, and we’re all in this together, win or lose.”