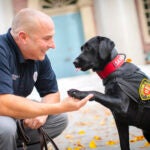 At a meeting of the Faculty of Arts and Sciences on Nov. 1, 2022, the following tribute to the life and service of the late Ofer Bar-Yosef was spread upon the permanent records of the Faculty.

When Ofer Bar-Yosef, George Grant MacCurdy and Janet G. B. MacCurdy Professor of Prehistoric Archaeology, Emeritus, died, the field of archaeology and Harvard lost a prolific, innovative, and beloved scholar and teacher. A Paleolithic archaeologist whose interests and expertise spanned more than 2 million years and many continents, Bar-Yosef’s fieldwork, scholarship, and mentorship transformed our understanding of some of the biggest problems in Old World prehistory: how and when the human genus first dispersed out of Africa, how and when modern humans evolved and interacted with other species such as Neanderthals, and what factors led to the emergence of agriculture, especially in the Middle East but also in Asia and elsewhere.

Born in 1937 in Jerusalem, Ofer’s interest in archaeology was kindled during childhood by playing with potsherds and fossils. At eleven, Ofer conducted his first excavation (without a permit) of a Byzantine cistern in his neighborhood. After joining a kibbutz and then serving in the Israeli Defense Forces, Ofer’s interest in archaeology turned into a full-blown passion when he volunteered to help excavate Kebara Cave and then the terrace of Nahal Oren Cave in Mount Carmel, both under Professor Moshe Stekelis of the Hebrew University of Jerusalem. In 1959, Ofer enrolled in the Hebrew University to study Archaeology and Geography. Many excavations later, Ofer entered graduate school there, obtaining his Ph.D. in 1970. During his graduate training, Ofer spent half a year studying Paleolithic technology and typology in Bordeaux with the eminent French archeologist, François Bordes. His dissertation, “The Epi-Paleolithic Cultures of Palestine,” was a monumental synthesis of the confusing archaeological record of the period from 20,000 to 6,000 years ago, when the first farmers and herders emerged from hunter-gatherers.

Even before finishing his Ph.D., Ofer developed a reputation as a brilliant archaeologist. Following the untimely death of Stekelis in 1967, the Israel Academy of Sciences and Humanities asked Ofer, together with his lifelong friend and colleague, Eitan Tchernov, to continue excavations of the 1.4-million-year-old site of ’Ubeidiya, then the oldest known archaeological site outside of Africa. Mary and Louis Leakey advised Ofer following Stekelis’s death and invited him to visit the excavations of Olduvai Gorge. From then on, Ofer maintained a global perspective on the Paleolithic, striving to connect the archaeological records of the Levant with those of Africa, Europe, and Asia.

Before joining Harvard’s faculty in 1988 as Professor of Anthropology and Curator of Paleolithic Archaeology at the Peabody Museum of Archaeology and Ethnology, Ofer rose through the ranks at the Hebrew University, becoming Professor of Prehistoric Archaeology in 1979. There he excavated dozens of sites, initially focusing on the late Paleolithic and the early Neolithic. With his students, Ofer overturned the longstanding view that the origin of farming was a sudden revolution, instead showing that agriculture and village life emerged gradually through a long, complex sequence of events, many driven by climate change, involving population growth, sedentism, and reliance on domesticable plants and animals.

Ofer never stopped studying the origins of agriculture, but in the 1970s he also became captivated by the origins of modern humans. His core contributions to this important topic derived from the excavations he co-directed of three Israeli caves: Qafzeh, Kebara, and Hayonim. At Qafzeh Cave he uncovered the burials of several early Homo sapiens fossils dated to about 90,000 years ago but with Middle Paleolithic tools then thought to be associated with just Neanderthals. At Kebara Cave, Ofer and his colleagues recovered a nearly complete Neanderthal skeleton also associated with Middle Paleolithic tools dated to about 60,000 years ago, thus finally disproving the long-held notion that humans evolved from a Neanderthal ancestor. At Hayonim, Ofer and colleagues revealed new details of the links between the Middle and Lower Paleolithic. Altogether these three excavations revolutionized our understanding of how modern humans dispersed out of Africa and interacted with closely related species, especially Neanderthals. Just as importantly, Ofer’s multidisciplinary excavations were dynamic laboratories of innovation for new methods of dating, unraveling the geological processes by which sites were formed and then altered, and reconstructing the behaviors of early humans.

Ofer was as prolific as a teacher and scholar as an excavator. He published two dozen monographs and over 400 papers in every major journal, including Nature, Science, and the Proceedings of the National Academy of Sciences. Virtually no paper written on the origins of modern humans or the emergence of agriculture does not reference or build upon his work. Among his many accolades, Ofer was elected to the U.S. National Academy of Sciences, the British Academy, and the Academy of Science of the Republic of Georgia; was awarded honorary degrees from Ben-Gurion University and the University of Bordeaux; and was the inaugural recipient of the Lloyd Cotsen Prize for Lifetime Achievement in World Archaeology.

Ofer was also an influential and admired teacher and mentor. He supervised 24 Ph.D. students, most of whom became professional anthropologists and archaeologists, and he mentored dozens of other young scholars from around the world, both in the classroom and in the field. He taught with a unique combination of intellectual rigor — challenging students with new ideas and relentlessly encouraging them to be creative, skeptical scholars — and an infectious, sometimes mischievous sense of humor. He expected his students to argue with him but always debated with a twinkle in his eye. Ofer’s sincere humility, despite his accomplishments, was universally appreciated by his many colleagues and students.

After retiring from Harvard in 2013, Ofer continued to excavate, publish, attend conferences, and collaborate with his vast global network of students and colleagues. In his final decades, he focused on Chinese archaeology. In addition to reevaluating the famous Zhoukoudian Cave site, he collaborated with Chinese scholars to study the origins of agriculture. Among his final contributions was the discovery of 18,000-year-old ceramics from southern China, preceding the origins of agriculture there by almost 9,000 years.

Ofer is survived by his wife, Daniella Bar-Yosef Mayer; their daughters, Daphne and Avivit; and two daughters from a previous marriage, Ayelet and Netta.