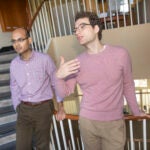 Tech entrepreneur scholar says part of it is management style, but there have been missteps, firm has serious underlying problems

Since Elon Musk, the world’s richest man, purchased Twitter for $44 billion last month, the company has undergone a series of abrupt shifts. Some changes, like Musk’s firing of 50 percent of the firm’s 7,000 employees, were deliberate. But others, like the walkout of more than 1,000 additional key infrastructure staff, as well as advertisers, were not.

Musk’s stated desire to make Twitter a haven for any speech “within the bounds of the law” has led to a sharp uptick in posts advocating white nationalism, anti-Semitism, homophobia, and right-wing threats of political violence, prompting many users to reconsider whether they will continue using the platform.

Critics say all these radical moves are akin to lighting Twitter investors’ money on fire. But is there a method to Musk’s madness?

Andy Wu is an assistant professor of business administration at Harvard Business School who studies technology entrepreneurs and the strategies they use to gain a competitive edge. Wu spoke to the Gazette about his take on Musk’s recent moves. Interview has been edited for clarity and length.

GAZETTE: Many of Elon Musk’s moves at Twitter have been widely criticized as being erratic and even foolhardy. Some in tech suggest there’s more of a “move fast, break things” strategy to it than perhaps meets the eye. How does it look to you?

WU: We shouldn’t be surprised by the management style that Musk is taking to Twitter. What he’s doing here is consistent with how he operates SpaceX and Tesla and his other businesses. While it isn’t quite building electric cars or going to Mars, the situation that Musk is stepping into at Twitter is challenging and might call for a leader who is willing to take some risks here rather than remain conservative as Twitter has been for a while. Prior to the acquisition, Twitter as a company was much weaker than most people realize. They’ve struggled with profitability for many years, and they’ve been quite slow at innovating on new features and growth opportunities. By doing this deal and having the media attention on Twitter, all we’re really doing is exposing a lot of that weakness to the public that we just hadn’t noticed or thought about before.

There’s definitely a lot of rough edges to what Musk has been doing so far at Twitter. But I would argue that many of these even sometimes laughable mistakes that we have seen over the last few weeks are an inevitable consequence of having to make some kinds of decisions here very, very quickly. For example, one big challenge for Twitter is that its ongoing cost structure is a bit out of hand and, by any metric, above comparable social media companies. And so, there is definitely an incentive here for them to try to get that in line sooner rather than later.

If you compare Meta/Facebook to Twitter, Facebook has had twice the revenue per employee as Twitter, and Facebook has significantly more employees working on long-range, innovative initiatives than Twitter. To a large extent, Twitter was inefficient at maintaining its ongoing operations, as well as innovating on new features. So, the fact that Musk came in and then laid off half the company is consistent with trying to get that particular benchmark in line. We should definitely feel sympathy for all the people at Twitter who have gone through this. But at the same time, we shouldn’t be surprised that Musk has chosen to start off in this way.

GAZETTE: Even before Musk’s purchase, Twitter was an influential but unprofitable business that lost money eight of the last 10 years. Now, digital ad revenues are falling pretty rapidly across the Internet, and advertisers are pausing or bailing on Twitter. What is the company’s financial outlook?

WU: It’s definitely a precarious situation for the company. We have to keep in mind that Musk and his co-investors do have more capital available should they want to again bail out the company. So, in that sense, they do theoretically have some flexibility on what to do about the coming interest payments on the debt that has been taken on. That said, the fallen advertising revenue has probably been more dramatic than anyone expected. The advertisers are right to at least take a pause here and think about whether they want to remain involved with Twitter. In the longer term, Musk certainly wants to build revenue streams beyond advertising, but we don’t know yet if premium memberships or financial payments or any other ideas will be able to make up for the lost advertising revenue. But they will definitely try.

A big motivation for this deal was that Musk and his co-investors like Peter Thiel and others really wanted to build and protect a vision of Twitter as a public forum or a town square for free speech. Their preconception of free speech is politically and ideologically divisive. And for good reason, there are many advertisers out there who don’t want to be affiliated with that definition of free speech. But if that’s the vision they want to go for, inevitably they need to figure out a way of monetizing the business other than advertising revenue, because the lost advertising revenue is a cost they will face in perpetuity. The reaction of advertisers today is more of a prelude to what might happen in the future. So far, we haven’t seen that many structural changes to the business yet, and the changes and experiments are rolling out progressively day by day.

GAZETTE: What does Musk need to do in the coming days to stabilize things or at least convince everyone that things are under control?

WU: It’s essential that he continue to actively engage with all stakeholders here. In the short term, calming the advertisers down is going to be very important, and Musk has already made moves in that direction. In the longer term, Musk either needs to agree to some of the demands of the advertisers, or he needs to more aggressively experiment with and grow the alternative revenue streams that he seems to aspire to. He’s proposed things like premium memberships, as well as a financial payment system akin to WeChat. We’ve yet to see if any of those are going to materialize into something significant financially.

For me, the No. 1 priority today would be to make sure that the broader technical infrastructure and social graph of Twitter stays active. There are a lot of features on the surface that you can play around with — say, the blue checkmark — but most importantly, he needs to make sure the website and basic app continue to run. For instance, Twitter needs to be able to handle the scaling up of traffic for the World Cup and stay operational when the most eyes are on it. On that front, it’s a very dangerous situation because Twitter has lost a lot of people, both through the layoffs as well as a significant amount of people willingly deciding to leave. Musk is at risk of losing or having already lost critical people in the background who make this whole thing work.

GAZETTE: Twitter has been under a consent decree for over a decade over data privacy and security violations. Back in May, the company had to pay the Department of Justice and Federal Trade Commission a $150 million civil penalty for misleading consumers on how they planned to use their personal information. On Friday Twitter executives who served on a governance board the FTC had ordered into existence left the company, prompting Senate Democrats to urge the FTC to investigate whether that violated the settlement terms. Also, last week, the FTC tweeted out what looked to many like a call for whistleblowers asking ex-employees to get in touch. Is Twitter facing any real threat from federal regulators?

WU: Absolutely. Twitter needs to be very careful about managing the legal and regulatory situation. The kinds of big moves that Musk has publicly considered are certainly going to ruffle feathers. There are people in D.C. who would be upset with that and want to bring attention to Twitter. Furthermore, the broader risk of regulatory and legal problems is not just about the United States. There are a lot of other global regimes that may have problems with what Musk is doing here. There are any number of problems that could arise. Data privacy is an important issue.

The other important issue is the question of content moderation. Different countries and governments have different perceptions of what is an appropriate level of content moderation. Other countries expect more stringent content moderation than we would in the United States. Even in places like Canada, where they would prefer stricter controls than we necessarily do in the U.S., Twitter appears to be moving in a direction that is going to challenge some of those norms and will possibly put the company at risk, at a minimum, of increased government attention.