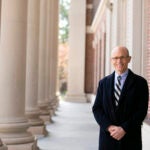 Hollister to step down as University CFO

Dulac, Sampson, and Sharpe honored with highest distinction for a faculty member

A molecular biologist and geneticist studying the brain circuits that control social behaviors in mammals. A sociologist researching the effects of urban inequality, crime, and turning points in people’s lives. An immunologist deciphering the regulation of T cells and how this knowledge can be harnessed to fight cancer and other diseases. All three renowned scholars have been named University Professors, Harvard’s highest distinction for a faculty member.

Robert J. Sampson, the Henry Ford II Professor of the Social Sciences in the FAS, has been named the Woodford L. and Ann A. Flowers University Professor, a professorship which was established in 2004 by J. Christopher Flowers ’79, and his wife, Mary H. White, to honor his parents’ devotion to education.

Arlene Sharpe, who has been appointed the Kolokotrones University Professorship, which was established by Wendy and Theo Kolokotrones, M.B.A. ’70, is currently the George Fabyan Professor of Comparative Pathology, the chair of the Department of Immunology, and the co-director of the Evergrande Center for Immunologic Diseases at Harvard Medical School.

“It is a privilege to acknowledge the extraordinary contributions of three individuals whose depth of scholarship and breadth of influence exemplify our University at its very best,” said President Larry Bacow. “Catherine is changing our perceptions of who we are and what governs the things we do; Rob is untangling the threads of circumstance that run through and between our lives; Arlene is making fundamental contributions to understanding disease that lead to new therapies for preserving human health.

“Learning about their research not only in particular but also in comparison has given me a greater appreciation for their excellence and for the dynamics that exist within their fields and among our faculty,” Bacow continued. “I appreciate the rare gift of appointing three University Professors at the same moment — and I am thrilled by the prospect of a world improved by their good efforts.”

All three appointments are effective Jan. 1.

“Being a faculty member at Harvard has allowed me to follow my passion for scientific research and teaching in collaboration with many inspiring colleagues.”

“Being a faculty member at Harvard has allowed me to follow my passion for scientific research and teaching in collaboration with many inspiring colleagues,” said Dulac. “I am intrigued and excited to continue to build on my existing work and creating new collaborations across the various Schools here at Harvard, which this appointment will further help foster.”

Over the past two decades, Dulac has helped transform behavioral neuroscience and contributed to a profound new understanding of how the brain orchestrates responses as a function of sex and physiological state. Her early work on pheromone sensing in rodents changed understanding of the role of olfactory signals in the animals’ behavior.

She has also delved into the neuronal circuits that control parenting and other social behaviors, showing that the circuits are present and active in both sexes, although many of these behaviors are identified as “male” or “female.”

More recently, her laboratory identified the specific brain cell types and neural circuits that coordinate various sickness symptoms during an infection, such as fever, warmth-seeking, and loss of appetite.

Dulac is a Howard Hughes Medical Institute Investigator, and has been honored as a recipient of the Breakthrough Prize (2021), the Society for Neuroscience’s Ralph W. Gerard Award (2019), and the McGovern Institute’s Scolnick Prize (2018). She is a member of the U.S. National Academy of Sciences, the French Academy of Sciences, and the American Philosophical Society and an Officer of the French Legion d’Honneur. She earned her Ph.D. from the University of Paris VI.

“The idea of exploring new research and teaching connections across the University is exciting, even more so given my interdisciplinary interests that originated in graduate school.”

“The idea of exploring new research and teaching connections across the University is exciting, even more so given my interdisciplinary interests that originated in graduate school,” said Sampson. “My current work is exploring how the social transformation of crime, punishment, and inequality in America over the past half-century has reshaped the lives of children from multiple birth cohorts. My thinking about the meaning and consequences of these societal changes for understanding the life course is traversing not just the social sciences but law, policy, health, and philosophy.”

A person’s life course is greatly influenced by external factors, especially the neighborhoods where children are born, grow up, and live as adults. Since the 1990s, Sampson has studied urban inequality, focusing on concentrated poverty, neighborhood social cohesion, and the impact of community-based organizations.

In addition to social factors, the presence of lead or other toxins in a neighborhood is harmful to the physical, mental, and emotional well-being of children, and Sampson has examined how this type of toxic environmental inequality affects social mobility, crime, and health over the life course.

A neighborhood is not static, however, and changes within a neighborhood can affect both residents and nonresidents alike, extending well beyond its borders. Sampson’s recent analysis of networks of everyday urban mobility throughout the 50 largest U.S. cities is challenging how we understand the interactions of neighborhoods, inequality, and structural theories of crime.

Sampson has also examined the degree to which social change, including mass incarceration, aggressive policing tactics, and declines in violent behavior, has altered the experience of children coming of age over the last three decades.

Sampson was also elected as corresponding fellow of the British Academy and fellow of the John Simon Guggenheim Foundation. He is the author of three award-winning books and numerous research articles in leading journals. Sampson’s last book, “Great American City: Chicago and the Enduring Neighborhood Effect,” is based on research from the Project on Human Development in Chicago Neighborhoods. He is currently conducting a longitudinal follow-up study covering 25 years in the lives of study participants spanning multiple birth cohorts. Sampson received his M.A. and Ph.D. from State University of New York at Albany.

“My own research has benefited enormously from interactions across the University, and it is a privilege to give back to the community that has provided me with so many opportunities by mentoring the next generation of scientists who will drive future breakthroughs in the field of immunology.”

As a leader in the field of immunology, Sharpe has identified the major costimulatory and immune checkpoint pathways that control the activation and inhibition of T cell responses. T cells are a type of white blood cell that can defend against pathogens, such as viruses and bacteria, and tumors.

Her functional characterization of these pathways has provided critical translational insights for therapeutic strategies for cancer and other diseases. Her work defining the PD-1 pathway and its immunoinhibitory functions has led to the strategy of PD-1 and PD-L1 blockade that is revolutionizing cancer treatment.

She is currently investigating the role of T cell costimulatory and inhibitory checkpoint pathways in antimicrobial and antitumor immunity and autoimmunity, and is working to translate the understanding of these immunoregulatory pathways into new therapies for cancer and autoimmune diseases.

“Immunology is a multidisciplinary science central to human health and disease,” said Sharpe. “My own research has benefited enormously from interactions across the University, and it is a privilege to give back to the community that has provided me with so many opportunities by mentoring the next generation of scientists who will drive future breakthroughs in the field of immunology.”

Sharpe earned her A.B. from Radcliffe College and her M.D. and Ph.D. from Harvard Medical School, and completed her residency in pathology at Brigham and Women’s Hospital. She has published more than 400 papers and was listed by Clarivate/Thomson Reuters as one of its Highly Cited Researchers (top 1 percent) in 2014-2021 and a 2016 Citation Laureate. Her honors include the William B. Coley Award for Distinguished Research in Basic and Tumor Immunology (2014), the Warren Alpert Foundation Prize (2017), and the SITC Smalley Award (2020) for her contributions to the discovery of PD-1 pathway.