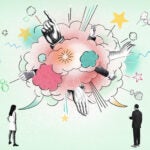 When agreeing to disagree is a good beginning

Can technology save us from the worst effects of climate change? Probably not, reports a new study, “Does Directed Innovation Mitigate Climate Damage? Evidence from US Agriculture,” published last month in the Quarterly Journal of Economics.

The study showed that “we cannot simply innovate our way out of danger,” said co-author Jacob Moscona, a Prize Fellow in Economics, History, and Politics at Harvard.

“Innovation has reacted strongly to rising temperatures. It has shifted focus toward crops and areas of the country most negatively affected by climate change and toward more adaptive forms of technology, like heat-resistant seeds. This has all helped farmers adapt. However, the notion that new technology is going to fully mitigate the economic consequences of climate change, even in a rich country like the U.S., seems inconsistent with existing data,” said Moscona.

New technology development has mitigated about 20 percent of the potential economic damage from climate change since 1960, the researchers estimate. Whether that is seen as considerable or negligible varies. As the paper’s co-author, Karthik Sastry, also a Prize Fellow, noted, both sides have validity: “Twenty percent is far from 0 percent,” he said. “There is clear potential to develop technological solutions to emergent environmental problems. And our mostly free-market system, in which innovation chases potential profits, can be powerful.” On the other hand, “Twenty percent is not 100 percent. The full force of the biotech industry, wielded against the full force of climate change, clearly has not ‘innovated away the problem.’”

The study also confirmed that, even with this mitigation, the damage is accumulating. “You see the consequences of climate change in farmer testimony and output data,” said Moscona.

Looking ahead, the team estimated that technology is expected to mitigate 13 percent of projected economic damage by 2100. However, this smaller number could be an underestimate, said Moscona. “There could be paradigm shifts in the way innovation happens to make it easier to mitigate some of the damage going forward,” he said. For example, “big shifts in biotechnology tools could mean that you can make a corn variety that can survive an extreme heat much more easily.”

“We do find evidence that innovation is really dynamic,” he added. “It is shifting, and it’s responding to some of these threats.”

However, Moscona also pointed out that this research studied agriculture in the U.S. “It’s a best-case scenario,” he said. “In other parts of the world, particularly low-income countries, there aren’t necessarily going to be the same incentives to develop technologies that help people adapt because the ability to pay for them is going to be substantially lower, and there isn’t always a large local public sector that’s really able to see and respond to the demands.”

Even new technologies developed in the U.S. won’t necessarily help the global situation. “Agricultural technologies are designed for particular environments,” he said.

Sastry agreed. “Heat-resistant corn designed to help farmers adapt in Indiana isn’t going to work ‘out of the bag’ in India — as one example, which Jacob and I explore in other work, the pests and pathogens in those environments might be completely different, and adapting a variety to these kinds of local conditions is a huge part of the biotech development process,” he said.

The most effective response, both agree, is to reduce emissions. “Even in the U.S., technology isn’t going to mitigate the majority of the damage from climate change,” Moscona said. “Whereas reducing emissions now could have big consequences.”