Weaving a piece of Indigenous history 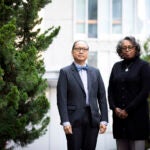 Keana Gorman was sitting in a seventh-grade classroom on her Navajo reservation in Arizona when she saw a recent photograph of some Native students at Harvard. She knew a little about the University, but not much. There was just something about the image that sparked a desire to try to do the same thing. That it was possible.

A classmate remarked that Harvard was only “for smart people.” But Gorman held onto the idea, and one of her high school teachers pushed her to pursue it. Adjusting to College was difficult. When she first arrived Gorman, who had been a top student at home, was pre-med but felt less than adequately prepared academically (she wrestled with a serious case of “imposter syndrome”). She managed to hang on with the help of some older Native classmates, and eventually things got better.

“I’m in my last semester now, and I’m really enjoying what I’m doing,” said the senior concentrating on history and literature with a secondary in Ethnicity, Migration, and Rights (EMR). “It’s a lot of work, especially my thesis, but I’m really glad that Harvard has allowed me the opportunity to engage with the scholarship that I’ve been engaging with [and] taking that beyond the classroom.”

The part of her work that really helped her latch on involved building a deeper understanding of her Indigenous culture and history and a sense of mission to reclaim and preserve Navajo knowledge.

During her junior year, Gorman began researching her junior paper about the Navajo gender system and Hosteen Klah, a renowned nádleeh, or “two-spirit,” chanter and weaver around the turn of the 20th century. The term “two-spirit” refers to a person in traditional Navajo culture deemed to have both a masculine and feminine spirit. Gorman was intrigued by how Klah occupied that role in the community and how Navajo society conceived gender roles.

While conducting her research, Gorman said she developed an interest in Navajo ceremonial wisdom and the anthropology surrounding it. Her work eventually led her to the Humboldt Forum, a museum in Berlin that houses a collection of historic recordings of Klah. The wax audio cylinders were captured by George Herzog, an assistant to ethnomusicologist Erich von Hornbostel at the Berliner Phonogramm-Archiv. The collection of cylinders was gathered in the late 19th and early 20th centuries, according to Gorman.

Last year, the 21-year-old Currier House resident received grants from the Office of Career Services, Harvard University Native American Program, and the EMR Fund that allowed her to travel to Germany and visit the museum, where she researched a collection of Klah’s recordings and was able to dive into the archive of supplemental materials related to Klah’s work. The opportunity, which Gorman described as “transformative,” allowed her to hear the voice of an ancestor to whom she had dedicated more than a year of research.

She noted that over the decades, museums collected artifacts and cultural information from Native reservations and communities “under the assumption that these were the ‘last remnants of a disappearing Indian culture,’ under a movement known today as ‘salvage anthropology.’”

“In this moment, Native communities are striving to revitalize cultural practices and our languages. Of course, many of us will turn toward our elders and artifacts that still hold that information. However, we are barred from accessing that information because they are behind lock and key, far from our homelands,” she said.

Apart from analyzing how Indigenous history and artifacts are treated by museums, Gorman also worked with Tina Shull, an assistant professor of post-1960 U.S. history at UNC Charlotte and a former professor at Harvard, on a project called Climate Refugee Stories. The professor’s project highlights the stories of Americans around the country who have been impacted by climate change.

As a correspondent for Shull’s project, Gorman wrote a piece against coal mining on Navajo Nation land that focused on sheep — a fundamental part of Navajo life.

“Sheep really are our livelihood,” Gorman said. “As Navajo people, we’re identified as the shepherds of the Southwest. When you introduce [an] extractive industry to Navajo land, what ends up happening is you disrupt the ecosystem that has been sustained by people for centuries,” both in terms of the environment as well as the culture.

For the Diné, which means “the people” and is the word the Navajo use to refer to themselves, sheep are a source of food, as well as wool to make rugs, blankets, and clothing. Gorman explained that the art of weaving is dominated by Diné women and nádleeh.

Away from the classroom, Gorman spent two years as co-president of Natives at Harvard College (NAHC), where she worked on the organization’s social side to engage Native students in conversation.

“First and foremost, Keana is a community leader, and she does that with her unique ability to be socially engaged, politically aware, and with a great sense of humor,” said Rebecca Hogue, a lecturer in the History and Literature Department and Gorman’s adviser. “She will continue to be appreciated as someone who brought people together and [who] very generously increased awareness around Indigenous issues on Harvard’s campus. That’s a tall order for any student, and Keana does that not only with great aplomb, but also with tact, fluency, and care.”

Gorman credited older Native students in NAHC with taking care of her during her difficult first year at school. “It was the Native upperclassmen when I was a first-year who really guided me and helped me,” she said. “[They] checked in on me and nurtured me into a student who was able to navigate spaces within Harvard that weren’t necessarily meant for Indigenous students or weren’t meant for Indigenous perspectives.”

She hopes to impart similar wisdom to younger generations of Indigenous students. “As much as you can find yourself, establish that grounding and who you are and everything else will come together,” Gorman advised. “If you’re still trying to figure out the world when you haven’t even figured out yourself, you get lost. Once you find yourself and who you know, you’ll have one constant in the chaos that is the world.”