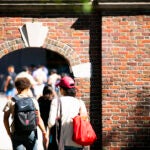 At a meeting of the Faculty of Arts and Sciences on Oct. 11, 2022, the following tribute to the life and service of the late Derek Albert Pearsall was spread upon the permanent records of the Faculty.

When he arrived at Harvard as the Gurney Professor of English Literature in 1987, Derek Pearsall was already recognized as one of the leading medievalists of his generation. He was an astonishingly productive scholar, with over 30 books and over 100 articles to his credit on topics that ranged across every genre and across eight centuries of literature, always with a keen eye on historical context. His meticulous yet always accessible editions of major late medieval literary texts continue to be used in graduate and undergraduate classrooms. Derek was ahead of his time in demonstrating how much could be gained by attending to the manuscript contexts of medieval literature, inspiring a deep investment in manuscript studies that has become a permanent feature of the discipline. “All his work,” wrote his friend Derek Brewer in 2000, “is characterised by a cool intelligence linked with sympathetic feeling for and understanding of both major and minor works of literature. Everything he writes is clear, witty, and percipient; up-to-date in scholarship but never merely fashionable. As a teacher he has been unfailingly inspirational. . . . His capacity for powerful concentration on essentials, his openness of mind, a strong empirical grasp on things as they are, together with a total lack of egotistical self-regard, have distinguished all his life and work.”

Derek particularly relished the social side of scholarship. He was a tireless organizer of conferences and a collaborator on dozens of publications, and every such occasion, it seems, generated lasting friendships. On more than a few occasions, he and his wife, Rosemary, opened their apartment in Mather House for delightful receptions after a talk by a visitor to the medievalists in the Department of English, and he presided over famously festive lunches each Thursday during term at a local seafood restaurant. His endless good humor and love of conversation could disarm even the most timid new acquaintance. “Nothing of this huge learning was ever on display in the exchanges of everyday life,” recalled another friend, Ronald Waldron. “In casual conversation he was always the same benign and affable, very ordinary person.” Graduate students in particular found him a perfect mentor, whose utter lack of pretension made his deep learning and keen intelligence accessible to everyone. He could be wickedly funny. He had that rare talent of asking the perfect question after a lecture, managing to take the discussion to a new level while putting everyone at ease. The way he conducted himself, both in person and through his publications, modeled how to be a scholar for scores of younger medievalists. The field is better for it. One measure of his colleagues’ esteem was that after his retirement he was honored with not one but three Festschriften.

The deep respect and personal affection for Derek Pearsall was never more apparent than during a collaborative reading of “Sir Gawain and the Green Knight” to commemorate his extraordinary life. Two months after his death, more than 100 medievalists assembled to take turns reading each of the 101 stanzas of “Sir Gawain and the Green Knight.” Because these were the bleak days of Covid, the readers could not gather in person, so they turned to the now-familiar technology of web-conferencing. Coming from many time zones and every career stage, the participants refused to let circumstances keep them from paying tribute to the career of a scholar whose first publication, in 1955, was on “Sir Gawain.” In spite of the somber occasion, it was a festive performance, which, as a number of participants remarked, Derek himself would have enjoyed.

Derek was the son of Elsie and Joseph Pearsall. Joseph left school at the age of 13 to work in a Birmingham factory, where by the time of Derek’s birth he had gained the skills to become a foreman toolmaker. Derek recalled how one night in November 1940, when he was nine years old, his father roused him, took him outside, and pointed to the horizon, which was aglow with orange light. It was Coventry, about 17 miles away, burning after a massive bombing that destroyed the city. Around this time Derek was sent away from Birmingham for safety. After two years he returned, and his brilliant performance in secondary school led to Birmingham University in 1948, as the first member of his family to attend college. His meteoric rise continued in college. He received the only “first” awarded in the 1951 final examinations, with the highest marks in each of the nine papers. After three years in national service, he completed his master’s degree at Birmingham, with a thesis on “Sir Gawain and the Green Knight” directed by Geoffrey Shepherd. In 1952 he married Joy Rosemary Elvidge in King’s Lynn, Norfolk; together they raised five children. He began his teaching career as a schoolmaster until 1959, when he was hired as an Assistant Lecturer in the Department of English at King’s College, University of London. In 1965 he moved to the recently established University of York, where he rose through the ranks to become Professor of English in 1976. In 1968 he became the co-founder and co-director of York’s Centre for Medieval Studies (with Elizabeth Salter and Barrie Dobson), which continues to be internationally recognized as a center of learning. He remained at York until 1987, when he joined the Harvard faculty. After his retirement from Harvard in 2000, he and Rosemary returned to their longtime home in York.

Derek was predeceased by Rosemary in 2004 and by their oldest son, Simon, in 2009. He is survived by children Sarah, Mary-Ann, Judith, and Daniel and grandchildren, Jamie, Elspeth, Tom, Gregor, Ben, and Jessica.