So you learned everything you know about sharks from a movie? 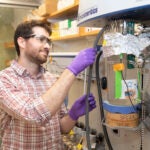 Marine conservationist explains why people should be more afraid of selfies, why we need to save these strange fish

More people are bitten by other people on the New York City subway than by sharks in the ocean. Flowerpots, tumbling from windowsills, kill more humans than sharks do. So do selfies: You should be more scared of falling off a cliff on your quest for a perfect photo than of a shark attack.

“Not only are sharks not bad. They’re actively good,” said David Shiffman, a marine conservation biologist at Arizona State University. Last week, the Harvard Museums of Science and Culture invited Shiffman to give a talk on his new book, “Why Sharks Matter: The Science and Policy of Saving Sharks.” In both, Shiffman explained why he adores these oft-feared creatures, and how we can help save them from extinction.

“I’ve loved sharks for a very long time,” said Shiffman, who wore a shirt that read, “Respect the locals” with “respect” spelled out in tiny sharks. Shiffman said that about a third of today’s 538 known shark species are considered at risk of extinction. And humans, he said, are by far their No. 1 threat. Overfishing — accidentally or on purpose — is dwindling their numbers, but so is human-induced climate change, which is causing rapid shifts in their ocean habitats.

“They’ve had a tough time in the last few years,” said George Lauder, the Henry Bryant Bigelow Professor of Ichthyology at Harvard. Sharks face a warming ocean, ocean acidification, loss of prey, and many more dire challenges, Lauder said in his introductory remarks.

“This is bad news, but it’s not a lost cause,” Shiffman said. “We can help sharks.”

But why should we? The greatest reason, by far, is that sharks are critical cogs in ocean ecosystems, Shiffman said. Ocean food webs are complex and vulnerable; removing a predator can have disproportionate impacts, potentially causing the whole system to unravel. Sharks also have unusual biology and abilities. Their skeletons are built from cartilage, not bone, which may help them heal faster. (Try to bend your forearm, Shiffman said to his audience. Then crinkle your ears. That’s the difference between bone and cartilage).

Sharks’ vision and sense of smell are better than humans’, and they have a sense we lack: Because sharks can detect electromagnetic fields, they can spot prey hidden under the sand by sensing the electricity in their beating hearts. The hammerhead shark’s long, flat head is like a metal detector, designed to scan the seabed for heartbeats instead of lost coins. Sharks also use the Earth’s magnetic field to navigate from a favorite beach to a specific island without getting lost at sea.

In addition, many species possess other useful traits. Some have biofluorescent mouths, which lure prey to swim right in. (“That is snack time goals,” Shiffman said.) Some glow in the dark. The goblin shark can hyperextend its jaw to better gobble up prey. The thresher shark uses its tail like a whip, making a shock wave that stuns its food. And the Greenland shark eats polar bears and can live for more than 400 years.

“You often think of sharks as being fast and powerful,” said Shiffman. But his favorite shark, the sandbar shark, is slow and lazy. Many misconceptions, he said, can be tied to Steven Spielberg’s “Jaws,” which portrayed sharks as evil monsters that hunt humans. “Spielberg has a lot to answer for,” Shiffman said. “Shark attacks are unbelievably rare and unlikely.” About 38 percent of reported shark attacks in Australia are false, he said.

Shiffman wrote his book to dispel these misconceptions and offer practical ways people can help save sharks. Some who want to help, he said, are doing more harm than good. Groups of people Shiffman calls “macho cowboy idiot scuba divers” take photos of themselves riding, hugging, and kissing sharks on the face. “Don’t do that,” Shiffman said.

During the question-and-answer portion of the talk, viewers as young as 4 years old asked why some sharks are bubble-gum pink (the answer: they live where light can’t reach, so that hue makes them near-invisible) and whether shark-deterrence technologies actually work. “The most charitable thing I can say is that some of them work sometimes under certain conditions,” Shiffman said.

One audience member asked whether Shiffman took a dip off Cape Cod, where he’d given a book talk the week prior. Shiffman responded with an anecdote: He was standing on a beach with a colleague who pointed to a spot where the ocean turned from light brown to black, the mark of a sharp drop-off. See that spot? His colleague asked. We have a sensor there that detected an adult great white shark out there 99 percent of last week.