No C-suite is an island 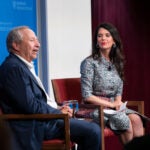 That a corporation should embed environmental, social, and governance principles, or ESG, into its mission was once thought to be the hallmark of only the most politically progressive businesses — ice cream maker Ben & Jerry’s, for example.

Today, amid growing pressure from consumers, shareholders, and employees, more than 90 percent of S&P 500 companies report their ESG goals and activities. But what are they actually accomplishing? And how can we encourage businesses to do more, while prompting holdouts to get in the game?

On Thursday, leaders from the private and public sectors, including Microsoft chair and CEO Satya Nadella and Gary Gensler, chair of the U.S. Securities and Exchange Commission, spoke with Harvard Law School and Harvard Business School faculty at Klarman Hall during the daylong conference “Reimagining the Role of Business in the Public Square.” Panelists weighed the responsibilities corporations have to the country and exchanged ideas about how to move firms further on their ESG pledges.

During a session about the gains different stakeholders have made shifting corporate mindset, Sherrilyn Ifill, a leading civil rights advocate, and Fred Krupp, longtime president of the Environmental Defense Fund, spoke with former Mass. Gov. Deval Patrick, now co-director of the Center for Public Leadership at HKS, about the expectations citizens can and should impose on business leaders.

At a time when voting rights and civil rights are being diluted or taken away, and the deadly effects of climate change are inescapable, “corporations have to begin to have a conversation about what is the responsibility of corporate citizenship in a democracy?” said Ifill, who served as president and director-counsel of the NAACP Legal Defense Fund from 2013 to 2022.

Both Krupp and Ifill said business leaders have finally accepted that being a good corporate citizen is not just a nice thing to do, but a vital one. The Environmental Defense Fund, which started in 1967 to force the federal government to ban DDT, a carcinogenic insecticide used in agriculture, has since partnered with many major corporations, like McDonald’s and Walmart, to help them switch to biodegradable packaging and reduce greenhouse gas emissions, respectively.

Patrick asked how much of corporate America’s embrace of ESG is genuine and how much is a public relations strategy. Krupp said it’s much harder for companies harming the environment to escape scrutiny or to spin their way out of bad behavior. Some climate commitments are undoubtedly being made “to satisfy the moment,” but most are sincere, he said.

In the last year, the percentage of Fortune 500 companies that have committed to get to net zero went from 8 percent to 25 percent, said Krupp, but whether they deliver on promises remains an open question. Unless those commitments are backed up by action plans, those goals won’t be achieved.

Business can also be an indirect vector for social change, said Ifill, referencing a Washington Post report about insurance companies that are telling police departments that unless they adopt major reforms, the firms will no longer foot the bill for misconduct settlements.

Is it a good idea for business leaders to speak out on an issue if they feel strongly about it? Sometimes, but it depends on what is said, the audience, and how often a CEO speaks out, Krupp and Ifill agreed. Leaders should speak thoughtfully and pick their moments wisely, they said.

“Whether you’re CEO of a for-profit or a nonprofit, there have been moments in the last few years where, as leaders of an enterprise in American society, we’ve had an obligation to speak for what is right and what is just,” said Krupp, of George Floyd’s murder by police, the white supremacist rally in Charlottesville, and the Jan. 6 attack on the Capitol.

“If there are thousands of people violently attacking the Capitol and trying to overturn the results of an election, and you feel like, ‘Ehhh. I’m not sure I want to say anything about this,’” said Ifill. “That speaks volumes.”