‘Do more and do better’ 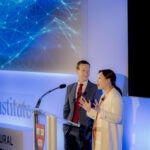 Being the president of Harvard requires hard work, long hours, a willingness to take on tough challenges, and skin just a bit thicker than most.

Still Lawrence H. Summers regards his time in the job with the greatest affection.

“In no five years of my life did I live as much life as I did in my five years as Harvard President,” a teary Summers told a crowd of University officials, deans, faculty, colleagues, family, and friends who gathered to celebrate the unveiling of his presidential portrait Friday evening at Widener Library.

Summers, a macroeconomist, joined the faculty in 1983 and served as the University’s 27th president from 2001 to 2006. He returned to teaching in 2008 as president emeritus and Charles W. Eliot University Professor. He is also Weil Director of the Mossavar-Rahmani Center for Business and Government at Harvard Kennedy School.

The portrait, by artist Steven Polson, captures “a sense of intensity and restlessness,” two qualities that, “for better or worse,” Summers said, “defined my tenure in Mass. Hall.”

“My intensity and restlessness as Harvard president came from a really strong conviction that what had happened for me here when I was a 19-year-old research assistant working for [economist] Marty Feldstein could happen for hundreds, if not thousands, of people, that sparks lit here could lead students to live life beyond what they previously imagined to be possible. That intensity came also from the knowledge that ideas generated here could have such a profound impact,” Summers said at the unveiling. “I was a man in a hurry because I wanted as much of that as could possibly happen.”

Longtime friends and colleagues, including Harvard President Larry Bacow, Robert E. Rubin, the U.S. treasury secretary when Summers served as deputy secretary in the 1990s, and Douglas Melton, longtime co-director of the Harvard Stem Cell Institute, spoke of Summers’ fierce intellect, strong opinions, and love for a good argument, all of which contributed to the significant impact he had on the University, on higher education, the biosciences, and on each of them personally.

Others, including Eric Lander, founding director of the Broad Institute, and Supreme Court Justice Elena Kagan, who was dean of Harvard Law School during Summers’ tenure, offered video tributes.

Kagan thanked Summers for giving her a level of independence that made her the envy of other law school deans. “But at the same time, you challenged me, you pushed me, you prodded me, and you didn’t settle for easy answers. When you thought I had something wrong, you let me know. And the end result was that I was a better dean. I made better decisions, and the law school became a better place,” she said.

Rubin, a member of the Harvard Corporation throughout Summers’ tenure, said the changes he introduced were “paradigm shifting.” Summers pushed for a major expansion of life sciences research at Harvard with the founding of the Stem Cell Institute and by helping to secure an initial $100 million to launch the Broad Institute for Genomics, in collaboration with MIT, among other efforts.

“He had a profound impact on the sciences,” said George Q. Daley, dean of Harvard Medical School and the Caroline Shields Walker Professor of Medicine, who described how Summers, “highly skeptical” of the emerging field of stem cell science back in 2003, became a “staunch advocate” after engaging with him, Melton, and other Harvard scientists.

Melton, a University Professor, said Summers was “a true visionary” who pushed for the expansion of biosciences at Harvard because he simply wanted faculty “to do more and do better.” That investment has yielded remarkable returns, with 38 biotech companies, as well as Moderna’s mRNA vaccine for COVID-19, all emerging from the Stem Cell Institute.

“I meet people who wouldn’t be alive if what happened at the Broad Institute and what happened at the Stem Cell Institute hadn’t happened,” he told the Gazette in an interview last week. “I meet young scientists who feel that they have the resources, the apparatus, the colleagues, the structures for collaboration, that enable them to do far, far more than they could have on their own because of what we left behind. And that gives me a real thrill.”

Opening the doors to Harvard College even wider to the best students, regardless of income, was another top priority for Summers.

In 2004, the University announced that families of admitted students with annual incomes of $40,000 or less no longer had to pay tuition to attend the College. Today, the program covers students from families with incomes of $75,000 or less, and it continues to offer needs-based assistance to others.

“Larry helped Harvard completely rethink how we did financial aid in order to make Harvard far more accessible,” Bacow said. “And in the process … forced a lot of higher education institutions to think about how they did financial aid.”

“I think it’s led us to find extraordinarily talented people who we otherwise would not have found,” Summers told the Gazette. “Harvard looks today, a much richer and more diverse community than the community that was here when I was a graduate student and taught my first EC-10 class” in the early 1980s.

Currently teaching three undergraduate classes, Summers has been a “much beloved” teacher and mentor to generations of students, said Bacow, who called him “a shining example for all of us to emulate.”

Lauren Schuker-Blum ’06, who confessed to hounding Summers first as a reporter and then president of the Harvard Crimson during his final year in office, said students indeed found it “thrilling” that a Harvard president would debate “nearly anything with them, nothing was off limits,” she said. “His love of arguing and debate is one of the things that made him so beloved by students — he loved students, and he truly enjoyed their company.”

Summers said his efforts, whether recruiting exemplary students and promising young scholars or providing the tools and support that faculty needed to solve the world’s most difficult problems, were driven by a belief that Harvard had the power to do even more and be better.

“The reason I was excited to become president was that I thought this was an extraordinary community with a kind of unmatched potential to change the world, change the world through the students who came through here, through the ideas that were generated here. That’s what I’ve tried to do as a teacher and researcher, and as president,” Summers said in the interview.

“This is a very special place for me, and I’ve always wanted to do everything I can to bring out its best.”