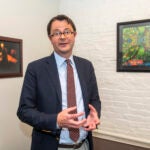 With conditions such as carpal tunnel syndrome and osteoarthritis on the rise, U.S. hand surgeons perform more than half a million procedures each year. Patients commonly receive a regional anesthetic to block pain prior to the procedure, plus monitored anesthesia care, or MAC, during the operation.

MAC typically consists of an IV-administered sedative such as propofol to keep patients feeling sleepy and calm during procedures but alert enough to follow instructions. Too much sedation, however, can lead to low blood pressure, upper airway obstruction, and serious complications such as stroke, heart attack, or respiratory failure.

In a novel attempt to reduce the risks of over-sedation, physician-scientists at Beth Israel Deaconess Medical Center conducted a randomized controlled trial to determine whether virtual reality immersion can minimize the need for sedatives during hand surgery without diminishing patient satisfaction. The team studied adults who were randomized to receive either VR immersion during the procedure in addition to MAC, or MAC alone. They found that VR immersion during hand surgery led to significant reductions in sedative doses as well as post-operative lengths of stay in the post-anesthesia care unit. Their work is published in PLOS ONE.

“With the increase in the amount of time people spend at the keyboard combined with our aging population, there is a projected increased need for common elective hand surgeries,” said senior author Brian P. O’Gara, an anesthesiologist and assistant professor at Harvard Medical School. “Optimizing care for these patients will undoubtedly involve modification to anesthetic practices. Virtual reality’s purported benefit in the management of patients with pain or anxiety is through providing an immersive experience capable of distracting the mind from processing the unpleasantries associated with undergoing surgery.”

“Our trial is novel in that it is the first to report a significant reduction in sedative dosing with VR immersion during hand surgery on adults.”
— Brian P. O’Gara

O’Gara and colleagues enrolled 34 adults who underwent hand surgery with regional anesthesia at BIDMC between December 2018 and August 2019. Patients who received VR wore headsets and noise-canceling headphones, and selected the programming of their choice from several immersive VR environments designed to promote relaxation and calmness, such as a meadow, forest, or mountaintop. For both groups, supplemental anesthetics or pain medications could be administered either upon patient request or at the discretion of the anesthesia provider. No investigators were assigned to be the anesthesia provider of study participants in either group, nor were study team members present in the operating room to conduct any research activities for control group patients.

In questionnaires administered after surgery, patients’ self-reported outcomes revealed no significant differences between the VR and control groups in overall satisfaction. Additionally, patients in both groups said their pain was well-controlled and that they felt relaxed during their surgery. Members of the VR group were discharged from the hospital an average of 22 minutes earlier than their counterparts in the control group. At one month after surgery, there were no hand-function differences between groups.

This work was funded by an American Society of Anesthesiologists’ Foundation for Anesthesia Education and Research Mentored Research Training Grant. XRHealth provided free access to software and hardware required for the trial. Additional support for investigator time, research personnel and equipment were provided by the BIDMC Center for Anesthesia Research Excellence.

O’Gara is a consultant for Sedana Medical. Korsunsky has commercial affiliation with Spectrum Healthcare Partners as an employee. All other authors report no conflicts of interest.