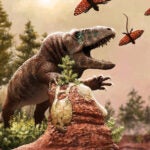 Why were reptiles such evolution success story?

What if emergency medical personnel could treat a desperately ill patient in need of oxygen with a simple injection instead of having to rely on mechanical ventilation or rush to get them onto a heart-lung bypass machine?

A new approach to transporting gases using a class of materials called porous liquids represents a big step toward artificial oxygen carriers and demonstrates the immense biomedical potential of these unusual fluids.

In a study published last month in Nature, a team of scientists in Harvard’s Department of Chemistry and Chemical Biology detail a new approach to transporting gases in aqueous environments using porous liquids. The authors identified and tailored multiple porous frameworks that can store much higher concentrations of gases, including oxygen (O2) and carbon dioxide (CO2), than normal aqueous solutions. This breakthrough may hold the key to creating injectable sources of oxygen as a bridge therapy for cardiac arrest, creating artificial blood substitutes, and overcoming longstanding challenges in preserving organs for transplants.

“We realized that there would be a lot of benefits to using liquids with permanent microporosity to address gas-transport challenges in water and other aqueous environments,” said Jarad Mason, the paper’s senior author and assistant professor of chemistry and chemical biology. “We’ve designed fluids that can transport O2 at densities that exceed that of blood, which opens up exciting new opportunities for transporting gases for a variety of biomedical and energy applications.”

Liquids with permanent microporosity are a new class of materials that are composed of microscopic porous particles dispersed in a liquid medium. Imagine tiny, recyclable, sponge-like bits capable of soaking up gases in their holes and releasing them. Until now, all porous liquids have consisted of microporous nanocrystals or organic cage molecules dispersed in organic solvents or ionic liquids that are too large to diffuse through the pore entrances. The researchers developed a new strategy to create aqueous porous liquids — termed “microporous water” — with high gas capacities based on thermodynamics.

Water is a polar molecule, making it a great solvent for other polar molecules such as ethanol and sugar, but it is much worse at dissolving non-polar molecules like O2 gas. As such, pure water can carry 30 times less oxygen than red blood cells. The extremely low solubility of gases in water has imposed a hard limit on many biomedical and energy-related technologies that require the transport of gas molecules through aqueous fluids. This new mechanism for gas transportation overcomes the low solubility of gases in water and enables rapid gas transport.

Inspired by pores in certain proteins that are accessible to water molecules but overall remain dry in aqueous solutions, the team proposed that microporous nanocrystals with hydrophobic internal surfaces and hydrophilic external surfaces could be designed to leave the microporous framework permanently dry in water and available to absorb gas molecules.

The team synthesized the materials in their lab and tested their ability to absorb and release gases. They found that microporous water can reversibly transport extremely high densities of gases through water-based environments. Using this strategy, the team developed a porous liquid that can carry a higher density of O2 than is even present in the pure gas. These aqueous porous liquids display remarkable shelf-stability, allowing them to be stored at room temperature for months before use.

“With some more development, you could imagine storing oxygen in a microporous liquid on an ambulance to have it ready to inject into a person whenever its needed,” Wenny said.

The lab plans to conduct more experiments on microporous water to test its biomedical applications, while continuing to explore other potential uses for the materials.

“We want to develop more materials and animal models to create and test an oxygen carrier in vivo,” Erdosy said. “We also have a more energy-focused project planned on using microporous water to address gas transport challenges in electrocatalysis.”