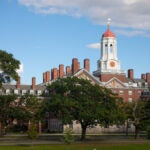 Some of Saul Glist’s most meaningful time while a Harvard student has been spent in St. Louis, where he has worked with community leaders and programs over the past three summers.

After falling in love with the city and its rich history of activism the summer after his first year, they are there this summer working on their senior thesis and serving as student coordinator for the Commonwealth Project, the brainchild of Walter Johnson, Winthrop Professor of History and Professor of African and African American Studies. The program brings professors and students to the St. Louis area, a region with longstanding economic and racial challenges, to collaborate on community-led justice and cultural initiatives and historical research.

“I think what makes the Commonwealth Project special is that we are trying to build relationships over the course of years. We’re not just sending one or two students to St. Louis [to work] in one organization,” said Glist, who will begin their senior year this fall. “We’re trying to bring a group of students here who are going to learn together and who are going through their own experiences. [They] come to understand different parts of the city and then grow up as a group.”

The idea for the project emerged from a series of conversations between Johnson and St. Louis activist and artist Tef Poe when he was an American Democracy Fellow at the Warren Center in 2016-2017, Johnson said. The hope was that the project would help foster students’ ability to work in “mutuality and solidarity” with activists on the ground.

“Our students have been told all their lives that what they need to do is to try to be leaders. The message that I’m trying to communicate to them is that they need to be listeners,” Johnson said. “They need to listen to the problem and to understand problems the way that those who are on the front lines, who are eyewitnesses, understand the problem. They need to learn to respect and amplify the ways that people on the front lines have tried to solve problems or imagine solutions for generations.”

Glist learned of the project, which is supported by the Mindich Program in Engaged Scholarship, during their first year after taking a course by former Professor Elizabeth Hinton on mass incarceration and historical perspective. That first summer, students worked throughout St. Louis in different organizations and with local academics.

The 21-year-old history and literature concentrator enjoyed their time in St. Louis so much that they returned to work remotely for the Equal Housing Opportunity Council (EHOC) in the summer of 2020 through the Mindich Program. They then opted to take a year off from School during the height of the pandemic to continue working for EHOC.

Glist, whose thesis examines housing rights in St. Louis as well as tenant organizing and property development, returned this summer for a third time to work on their thesis research and be a student coordinator.

Sediqzad was paired up with Black Men Build, which helps local disenfranchised communities with services such as food drives and Narcan deliveries to prevent overdose deaths. At its core, Black Men Build encourages its members to serve their communities and to build the tools needed to empower Black futures.

Unlike his peers, the rising junior was familiar with the issues facing disenfranchised communities in the city before joining the Commonwealth Project. Being a Harvard student allows him to see the issues in a new light, he said.

Veneziano works as a communications intern at the holistic legal advocacy nonprofit ArchCity Defenders, which “aims to combat state violence and the criminalization of poverty.” The organization focuses on three main issues: housing equity, civil rights litigation, and community engagement. Part of his everyday work includes reaching out to clients, sending press releases, and sharing media advisories. On Juneteenth, for example, he helped with an event that had Democratic U.S. House member Cori Bush, who represents St. Louis, as a speaker.

“I feel very grateful to be involved in an organization that’s doing such impactful work. It’s difficult work too. It’s very heavy talking with clients who have been through so much,” he said. “As someone who really values learning, this is probably the best place that I could have been because there’s just so much knowledge in this city and so much lived experience.”

“If you want to learn from someone about what issues there are in the United States and what possible solutions there might be, I think you need to include St. Louis in that conversation.”
— A.J. Veneziano ’23

The history and literature concentrator called St. Louis a microcosm of the U.S. and pointed to the “Delmar divide” as a prime example. Delmar Boulevard splits the city into two distinct economic and racial areas. “The segregation and housing inequality in the city is so obvious, and people don’t even try to hide it,” he continued. “Everyone knows it’s there. Everyone acknowledges it.”

St. Louis puts the issues faced in the U.S. “on blast,” which explains why the city has such a long history of activism. “These organizers are people who know what problems there are and how to fix them,” Veneziano said. “If you want to learn from someone about what issues there are in the United States and what possible solutions there might be, I think you need to include St. Louis in that conversation.”

Sediqzad agreed but said that cities with similar racial and economic profiles face the same issues. “If you look [at] a city like Baltimore, or New Orleans, [or] even at parts of L.A., you’ll see the same things going on,” he said. “I feel that’s something that we should not forget as people because there might be a St. Louis closer to you that you don’t even think about.”