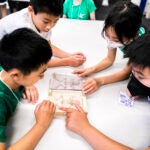 Learning can be fun. Just ask these ‘Explorers.’

Legendary scientist-entrepreneur Edwin H. Land created more than 40 years ago a refuge where scientists could sidestep bureaucracy and follow their research wherever it led them — often toward experiments considered impossible to do. That vision continues at Land’s Rowland Institute, which came to Harvard in 2002. At the heart of the institute lies the Rowland Fellows Program, which started when the Institute came to the University and since then has funded more than 35 young scientists from around the world, giving them the support to do cutting-edge research. The fellows will relocate their labs to the Cambridge science campus at Harvard beginning in the summer of 2024. Here are some of the innovative ideas the current Rowland Fellows are working on as the program marks its 20th year.

On the surface, Ismail El Baggari’s research is quite simple. He uses a microscope to examine objects and take photos of them. But the microscope El Baggari uses is a 12-foot-long piece of equipment called a scanning transmission electron microscope that can magnify objects up to 2 million times, enough to see the atoms that make up materials. El Baggari and his lab members use the microscope to examine the unexpected and unpredictable properties of quantum materials as they undergo super cooling and then manipulate the materials. The findings may one day help scientists design new electronic devices for applications in quantum computing, efficient memory, and renewable energy.

“When [they are supercooled], the properties of the material will change dramatically,” El Baggari said. “We’ll go from a metal to an insulator or a metal to a superconductor. What we try to do is to image these materials at the atomic scale and see what the electrons and the atoms are doing as they transition from the more pedestrian state to the really low-temperature quantum state. … We want to see how these materials switch from one stage to the other.”

Bryan Hunter is trying to help save the world with a laser. His lab utilizes one of the most powerful lasers at Harvard to craft new materials that can be used to make some of the world’s most important chemical processes more sustainable. For example, they’ve made never-before-seen structured materials that are better at splitting water into oxygen and hydrogen, clean fuels that will lead to a reduction in the use of fossil fuels and carbon dioxide in the atmosphere.

Scientifically, the L.A. native’s approach is called pulsed laser ablation in liquids, which is the process of firing a high-powered laser onto targets under extreme conditions to produce materials at center-of-the-Earth pressures and surface-of-the-sun temperatures.

“You see the material, sort of, just come out right in front of your eyes,” said Hunter, who’s been a fellow since 2018 and is leaving in September to join the faculty at Northwestern. “We then collect these materials and have to figure out what they are, what they can do, what they can’t do.” So far, Hunter’s team has discovered six or seven new techniques to use to craft novel materials.

For Shabnam Raayai, it’s always Shark Week. A Rowland Fellow since 2019, Raayai investigates the flow around the geometry of structures and textures that are inspired by patterns in nature. In her lab’s case, it’s the textures on the skin of fast-swimming sharks like the mako. The lab mimics the ribbed design of their skin, tries to understand what these scales do, and then offers design guides and solutions to industries trying to devise efficient surfaces for use in fields like aviation or oceanic operations. The hope is to provide design criteria for fabrication of energy-efficient textured surfaces for different situations.

Unlike most bio-mechanic researchers who focus on one aspect of what the structures do, Raayai is trying to provide a full picture of what different designs mean for what’s known as flow response. Raayai determines this by putting the structures she designs through various systems (a water tunnel and a two-concentric cylinder) to see how easy or hard it is for fluid to pass over. In addition to studying shark scales, the lab also looks at butterfly skins and ridges on the mouths of pitcher plants.

“We have a lot of challenges around us that just math and physics alone is not going to solve,” she said. “Nature has showed us that it has evolved to very specific responses — a lot of animals and plants are living in areas that are very harsh, but they have evolved to be able to live in that environment. We have the solutions around us.”

The neural lord of flies

Sailing enthusiast and neuroscientist Sasha Rayshubskiy had long been interested in navigation and generally in how things work. Growing up, he spent his afternoons in his father’s electronics repair shop taking apart VCR boards and trying to reverse-engineer the scrambled meshes. He earned his Ph.D. at Harvard, having researched the neural architecture of flies in the lab of Harvard Medical School neuroscientist Rachel Wilson, and his Rowland work combines these two passions in his own lab.

Since 2020, Rayshubskiy has been studying the motor control system in Drosophila, the common fruit fly. Specifically, his lab is looking at how the insects navigate using wind and whether researchers can use that knowledge to make the flies go where they want them to. Rayshubskiy and his growing team of postdocs and undergraduate researchers are building a system that helps them study what happens in a fly’s brain when the wind changes. They’ve also been using a small array of lights to make the flies walk to arbitrary target areas in a small round arena.

The next step is seeing whether they can control them during flight. “It sounds like science fiction at this point, but it’s actually not as far from the reality of what is possible,” Rayshubskiy said. “This is a proof of concept.”

Christian Reece, a Rowland Fellow since 2019, walks a less-traveled road. In fact, only three other labs in the U.S. do what his does: research the role catalysts play in speeding up chemical reactions.

The reason is because of the machine they use: the Temporal Analysis of Products reactor, or TAP reactor for short. It’s a large and complex piece of equipment that most researchers don’t know how to build and maintain — or simply don’t want to.

Catalysts provide a cheaper, faster way to make a vast array of everyday chemical products humans have come to depend on, such as fuel and fertilizer. Because these products are produced at such scale there is a dire need to make catalysts that are even more energy-efficient or don’t result in unwanted byproducts.

TAP reactors can help probe for better, more efficient catalysts by closely analyzing their chemistry over a period of time. Taking these measurements sounds simple enough; the difficulty lies with trying to test under ultra-high vacuum conditions. There could be a leak; the pulsing valve may not fire at precisely the correct time; there could be too little material; the response from the mass spectrometer could be poorly scaled. And sometimes it just won’t work. It’s one of the reasons there are fewer than 20 of these reactors in the whole world.

“[The machine] will always get a result,” said Reece, who’s originally from Cardiff in Wales. “But whether that result is valid is up to debate.” When it does work, however, the process is extremely elegant, he said: “It’s just a wonderful way to study chemical reactions.”

The Rowland’s newest fellow, Sascha Feldmann, is looking to set the stage for the next generation of devices and wearable technology, like solar cells and LED displays. And the way he’s doing it involves trying to make things glow.

Feldmann, who moved here last month from Cambridge, England, does that by shooting very intense, fast pulses of light into thin, flexible materials like molecular semiconductors. It all takes place in 1,000th of a millionth of a second. What Feldmann hopes happens is the material will start to glow. “If it’s glowy material that’s very good because it means it makes use of the energy you give it,” he said. “It’s good at absorbing light and making it into electricity or the other way around.”

The goal is to feed this knowledge about materials into making LEDs and solar cells that can be put just about anywhere, even on the hoods of jackets. “All of these materials are so inherently flexible and ultra-lightweight and absorb so much light and are so efficient, you would only need like a 1,000th of the thickness of your hair to coat your plastic foil and get the same result as you would with the rigid rooftop solar panels,” said Feldmann, who is in the early stages of testing material and is currently setting up his lab. “We can all be our own power plants.”