‘Boots on the ground’ between City Hall and Mass and Cass 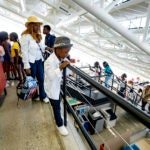 When Emily Romero Gonzalez ’21 was named Harvard’s sixth Presidential City of Boston Fellow in August 2021, she didn’t realize her yearlong tenure would include a mayoral transition, ever-evolving COVID-19 challenges, and a public health and housing crisis. Romero Gonzalez, who joined the city of Boston under Acting Mayor Kim Janey and continued to work into current Mayor Michelle Wu’s administration, concluding her fellowship this month.

The Presidential City of Boston Fellowship, which was launched in 2016, funds a recent Harvard College graduate to work as a public service fellow in the Boston mayor’s office. In collaboration with city officials, fellows work full-time for one year to manage and execute projects that address various issues and engage Boston residents through a range of community-based efforts.

The Gazette sat down with Romero Gonzalez to learn about her experience. The interview has been edited for length and clarity.

GAZETTE:  What made you interested in participating in this fellowship?

ROMERO GONZALEZ: My interest in this fellowship stemmed from my background and experiences growing up as an undocumented young person in the United States, and now as a DACA recipient. The challenges that my parents faced, dictated by federal government policies, shaped who I am and my desire to serve immigrant communities. Throughout College, I explored a variety of sectors to do this: fundraising work for a domestic violence center in Bridgeport, Connecticut, legal work at an immigration law nonprofit in Los Angeles, and civic engagement work in New York City. Most of my internships somehow intersected with municipal government, whether it was through advocacy, fundraising, or community partnerships.

I applied to this fellowship because I wanted to learn more about the potential for government — especially city government — to move with more urgency and address pressing issues with equity and care. Learning about the work of the Boston mayor’s Office for Immigrant Advancement, which had recently launched a leadership development program for undocumented young people, was amazing! It would have been a program that many of my peers and myself would have benefited from. I wanted to learn what cities can do to push the boundaries and serve immigrant communities.

GAZETTE:  Generally speaking, what did you find was the most fulfilling aspect about working in city government?

ROMERO GONZALEZ: The “boots-on-the-ground” nature of city government work has been the most fulfilling for me. I work at City Hall usually, but I always take up any opportunity to go into the community and meet residents face-to-face. Seeing and hearing the direct impact that city programs have had on their lives, or identifying what the city is doing wrong, and what we can do better, makes the work that much more fulfilling. That’s been the best part of working and living in the city.

“In the end, I learned that good government comes down to prioritizing equity, caring for residents, and working with the community.”

GAZETTE:  Almost as soon as you arrived at City Hall last year you got to work supporting immigrants in crisis. Can you talk about that?

ROMERO GONZALEZ: During my first week at City Hall, very jarring pictures of Haitian immigrants at the U.S.-Mexico border exploded on the internet. A week or two later, hundreds of Haitian families started coming to Boston, partly because Boston has the third-largest Haitian immigrant population in the United States, and these new immigrants already had family members living here.

I worked with the mayor’s Office for Immigrant Advancement, and many other partners, including the mayor’s Office of Housing, to prepare for and support these arriving families, because we knew from past experience that if they did not get the support they needed, they could fall into homelessness or other vulnerable circumstances. I helped organize a City Hall Drive to bring basic necessities to these families, and I was able to learn from the mayor’s Office of Housing about how the city can bring rental assistance to individuals who may not always have the required identification and paperwork. There are some really innovative strategies that the city has come up with to serve individuals who are oftentimes at the margins of society, and that’s been really amazing to learn about and contribute to.

GAZETTE: But even in the midst of that urgent challenge, you started work on more long-term immigrant programming to support digital equity, correct?

ROMERO GONZALEZ: Yes, so also during my first week, I was told that the Boston Public Library needed help to create a new model to distribute Wi-Fi hotspots to community members who are underserved and have little to no Wi-Fi access. The library really wanted to prioritize certain communities that may not receive that notification of that resource or may not be aware. The question is, “How do we do that?”

Through my previous community work, I intimately knew the power of community to spread resources and support one another. We began by reaching out to city departments to provide us with community contacts, including the mayor’s Office for Immigrant Advancement, Office of Food Justice, and Office of Small Business. Over the course of months, I helped the city develop relationships with community organizations, including organizations providing services to Haitian immigrants coming into Boston, as well as refugees from Afghanistan. Through this program, the city worked with community-based organizations to funnel hotspots — and eventually Chromebooks and routers — into the hands of community members who may not have heard of the program at all. Since then, our partners have shared that residents have used the internet to access online ESL classes, reconnect with family online, access online GED courses, and more.

GAZETTE: How did your work change when Mayor Wu and her team came on board after the November election?

ROMERO GONZALEZ: Leading up to the election, I took a step back from some of my projects and worked as one of the main organizers of the mayoral transition. For two weeks, I organized and took notes on briefings from nearly every city department, alongside the incoming team. That time period really accelerated my learning and I was able to more closely see what is working and what isn’t working in the city of Boston and also meet the new administration, which was exciting. For example, we had a briefing on winter weather emergencies where I learned the ins and outs of the city’s response — important work that I never really appreciated growing up; there are truly so many people who put so much effort into making sure the community is safe! After those hectic two weeks, I had to figure out my place in a new administration with a whole new team.

GAZETTE: How did you find yourself on the mayor’s team that is addressing the “Mass and Cass” homeless encampment?

ROMERO GONZALEZ: In December, the city was gearing up for a public health emergency response at Mass and Cass, and the mayor’s office team needed support. I eagerly agreed to help and ended up getting really deep in the trenches with it. Mass and Cass gets its name from the intersection of Massachusetts Avenue and Melnea Cass Boulevard, and in the last couple of years, it became an area deeply impacted by the intersecting crises of unsheltered homelessness, substance use disorder, and mental health.

The Wu administration set out to move more than 150 people from the tent encampments into transitional housing and shelter. Mayor Wu needed help putting out a staffing call for care workers. Coordinating this from the Mayor’s Office was my first assignment. By January, I was working in person at the encampment itself, learning from outreach workers and helping people pack their things into storage so that they could be referred to their transitional housing placement. City employees, service providers, and community partners came together in this immense effort. I remember feeling the extreme, bone-chilling cold that people experiencing unsheltered homelessness had felt all winter. It was the most difficult but meaningful effort I’ve ever been a part of.

After January, the mayor’s office pivoted to planning for the long term and responding to the immediate needs of the people who had been transitioned. Over the course of a couple of months, I participated in listening sessions with stakeholder groups all around Boston, including focus groups at each of the transitional housing and shelter sites. I organized and led listening sessions with Spanish speakers at Mass and Cass, where I heard stories similar to those of the Haitian immigrants whom I had served earlier that year. My work with the mayor’s Office for Immigrant Advancement and the Boston Public Library helped to shape my Mass and Cass work, including working to prioritize Chromebooks and Routers for the people at the transitional sites. It was great to see my projects throughout the year come together because of so many intersecting challenges. In the end, I learned that good government comes down to prioritizing equity, caring for residents, and working with the community.