At Morning Prayers, Bacow urges listeners to meet the moment 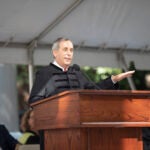 Bacow counsels first-years to be ‘slow to judge, quick to understand’

‘If we stand for Veritas, we must speak for Veritas. We must be both its bearer and its defender.’

President Larry Bacow, giving his customary remarks at the first Morning Prayers of the new year, began by reflecting on how liberated and grateful he felt to be back at Appleton Chapel and out from the pandemic’s long shadow. “It finally feels like we can live life again,” he said Wednesday.

In his address, Bacow spoke of a shared obligation among students and citizens in a time of deeply felt political and social divisions and threats to democratic principles — namely, the obligation to argue. What Harvard “demands and expects of us, what this nation needs of us in this moment, what the world needs of us” is debate, he said. When “what we have to lose [is] a functioning democracy, a habitable planet,” the proper response is a rigorous insistence on truth.

“Gone are the days of quiet assurance and polite acquiescence,” he said. “If we stand for Veritas, we must speak for Veritas. We must be both its bearer and its defender.”

In the Jewish faith, Bacow explained, there is no singular voice of authority to settle theological disagreements or clarify competing interpretations of scripture. Such disputes are to be resolved through rigorous and respectful argument, often one-on-one, because it’s in the direct engagement and dialogue between two people that real understanding emerges. It’s a tradition that would serve Harvard students, faculty, and staff well in this moment, when truth and facts are under attack and those who hold different viewpoints are publicly and even personally vilified, he said, adding that disagreement doesn’t mean loud voices and finger-pointing.

“It means arguing in a way that celebrates and strengthens our mission, that demonstrates the power of knowledge and the forbearance of wisdom,” he said.

“As we begin again to imagine the future — as individuals and as a community — may we all find ways to resist the lure of righteousness and moral certitude,” he said. “May we embrace the possibility of transcendence through argument. And may we live life again with greater appreciation of its fragility — and for our dependence on one another.”

Matthew I. Potts, Pusey Minister in the Memorial Church and Plummer Professor of Christian Morals at Harvard Divinity School, led the reading of Psalter Number 4 and offered the benediction, while the Choral Fellows of the Harvard University Choir sang “Cantate Domino” by Claudio Monteverdi.

Morning Prayers is a tradition that dates to the College’s founding in 1636. The 15-minute service of scriptural readings and faith music is held each weekday before the start of classes and is led by a changing roster of local clergy, Harvard faculty, staff, students, and members of the broader Harvard community.