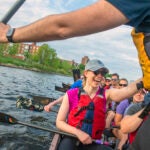 How to move a dragon — fast

Harvard forcefully defended its compelling interest in pursuing the benefits of student-body diversity and the consideration of race as one factor among many in a narrowly tailored admissions process in a brief filed Monday with the Supreme Court. The filing is the latest round in the University’s eight-year battle to defend race-conscious admissions.

The Constitution’s promise of equal protection under the 14th Amendment “does not require us to disregard the commonsense reality that race is one among many things that shape life experiences in meaningful ways. And nothing in the text or history of the Fourteenth Amendment suggests that universities must uniquely exclude race from the multitude of factors considered in assembling a class of students best able to learn from each other,” Harvard’s legal team said in the brief.

Harvard President Larry Bacow underscored the University’s commitment to campus diversity in a statement released shortly after the brief was filed.

“In our brief filed with the Supreme Court today, we have made a powerful case that enrolling a diverse student body is central to fulfilling our educational mission, that diversity enhances education for all, and that Harvard does not discriminate against any group in its admissions practices, a conclusion affirmed by two separate lower court decisions,” he said. “I encourage everyone to read the brief. It also persuasively argues that the text and history of the 14th Amendment support the conclusion that the Constitution permits consideration of race as one factor among many in a whole-person admissions process. We remain steadfast in our belief that every college and university must retain the freedom and flexibility to create the diverse educational communities that will prepare their students for the opportunities and challenges they will confront in an increasingly diverse society.”

For more than four decades, the Supreme Court has recognized that colleges and universities have a valid educational interest in attracting and convening a diverse student body. A trio of decisions — Regents of the Univ. of California v. Bakke (1978), Grutter v. Bollinger (2003), and Fisher v. Univ. of Texas (2016) — have all affirmed that the limited consideration of race in admissions is constitutional.

“Those decisions were correct then and remain correct today,” Harvard attorneys stated Monday.

Students for Fair Admissions, Inc., founded and run by the conservative activist Edward Blum, filed suit against Harvard in 2014, challenging the University’s consideration of race in admissions and claiming its admissions policies “intentionally discriminated” against Asian Americans. After trial, a U.S. District Court judge ruled decisively in 2019 that Harvard does not discriminate and that its limited consideration of race complies with longstanding Supreme Court precedent.

SFFA appealed to the U.S. Court of Appeals for the First Circuit. In November 2020, the Appeals Court rejected SFFA’s arguments and affirmed the district court’s decision that Harvard does not discriminate and that its admissions process satisfies strict scrutiny. SFFA appealed the ruling to the Supreme Court, which in January of this year agreed to consider the case. The Court is expected to hear the Harvard case and another case SFFA filed against the University of North Carolina in the term that begins this fall.