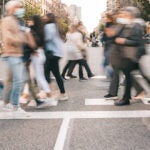 A new study shows something we’ve always figured was true: our health and habits as children and teens affect our health as adults. And not just our health, but how long we live.

What did the study measure and find?

The International Childhood Cardiovascular Cohorts Consortium Outcomes Study has been collecting data on almost 40,000 people from the United States, Finland, and Australia. They started enrolling them as children in the 1970s through the 1990s, and have been following them ever since.

The researchers have been looking at the effects of five risk factors:

From 2015 to 2019, the researchers followed up on all of these people, who were 46 on average, which is not very old. They found that almost 800 of them had had cardiovascular events (like a heart attack or stroke), of which more than 300 were fatal.

When the researchers matched outcomes to values for the five factors, they found that they were indeed risk factors:

None of this is a surprise, but seeing it so clearly should be a wake-up call, especially to parents.

Claire McCarthy is a senior faculty editor as Harvard Health Publishing, a primary care pediatrician at Boston Children’s Hospital, and an assistant professor of pediatrics at Harvard Medical School.