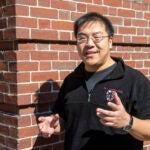 Tyler Patrick started planning a life of service when he was a boy. The past four years have given shape to that plan.

A native of Columbus, Ohio, Patrick, J.D.’22, has been working on both a master’s in international development at Princeton and a J.D. in international and comparative law at Harvard Law School. If that wasn’t enough, in June of last year he was commissioned as an officer in the Marine Corps.

How Patrick took on the study of both international law and public policy, and a commission with the Marines, is a tale of hard work and perseverance shaped by his Catholic upbringing. Although he has cut ties with the faith, Patrick said the lessons of his religious schooling remain front and center in his mind.

“The biggest influence I had growing up was Catholic social teaching and the idea that a life well-lived is a life of service,” said Patrick, whose journey to Harvard began six years ago and nearly 8,000 miles away, in the Pacific islands of Micronesia, where he traveled in 2016 on the advice of a mentor at Georgetown’s Walsh School of Public Affairs.

The 600 small islands that make up the Federated States of Micronesia are freely associated with the U.S. Patrick spent most of his time in the Ulithi atoll, which consists of 40 islets. Laboring alongside residents — cultivating taro patches, clearing overgrown runways, and doing typhoon reconstruction work — helped him realize the joy and the value of community work.

A year before, Typhoon Maysak had destroyed homes, crops, and fruit trees, and damaged public infrastructure, including rainwater catchment systems and water tanks, across Micronesia. In one of the most vivid memories from his two years in the region, Patrick joined dozens of villagers who unloaded construction materials for typhoon reconstruction work by hand; they formed a long line that stretched from a ship anchored on the beach to building sites in the village.

“We handed materials from person to person, like stevedores,” said Patrick. “It was an exhausting yet poignant experience. It was the first time I experienced what it means to work in community.”

Patrick reveled in the “ineffable magic” of swimming and fishing alongside villagers and sharing communal meals; he never felt alone. He also made time to plan his future.

“The way I wanted to work in international development, I realized I had to be a sort of Swiss-army knife,” he said. “It was not going to be enough to know statistics … it also may be that on the drop of a hat I have to litigate a case on behalf of a community.”

At the Law School, Patrick has continued answering his calling to serve. In the fall, working with the Veterans Law and Disability Benefits Clinic, he helped represent the partner of a deceased veteran who was denied full survivor benefits. For Patrick, who is openly gay, the case was meaningful because it was a matter of “fairness and justice for same-sex couples.”

Patrick’s combination of powerful intellect and strong moral compass has impressed his classmates and instructors. Naz K. Modirzadeh, a professor of practice and the founding director of the HLS Program on International Law and Armed Conflict, met him four years ago when he enrolled in the reading group “Passion and International Law.”

After graduation, Patrick will report to Quantico, Virginia, for a four-year active-duty commitment with the Marines. He enlisted because he wanted to explore another realm of public service, he said. “Military service is an attempt for me to give back for all that I have received from my country.”

Looking back, Patrick said that a desire to serve others has been his driving force not only because it’s rewarding, but because it’s the right thing to do.

“My father repeated a phrase to me all the time growing up, any time that I was tired or feeling sorry for myself. He would say, ‘Tyler, to whom much is entrusted, much is expected.’ It all goes back to that refrain.”