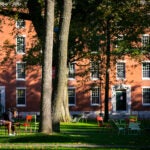 Claudine Gay, Edgerley Family Dean of the Faculty of Arts and Sciences, has announced that Ju Yon Kim, Khaled El-Rouayheb, and James Mickens have been named Harvard College Professors. Launched in 1997 through the support of John and Frances Loeb, the professorships provide support for professional development, in the form of research or scholarly activities and a semester of paid leave or a summer salary. El-Rouayheb, James Richard Jewett Professor of Islamic Intellectual History and chair of the Department of Near Eastern Languages and Civilizations; Kim, professor of English; and Mickens, Gordon McKay Professor of Computer Science, begin their five-year appointments July 1.

“There’s something really beautiful about the fact that I could have studied a text for years and years, but a student reads it for the first time without any of the critical discourse, and they come up with a brilliant insight that I haven’t even thought about,” she said. “It just completely transforms the way that I think about a text.”

Kim is currently working on a project on bureaucratic papers, specifically those dealing with immigration and exclusion, and how artists forced to complete these documents translated the experience into performance.

Khaled El-Rouayheb studies the history of ideas in the Arabic-Islamic world from roughly the 13th to 18th centuries. He has written on sex and love, education, logic, the theory of argumentation, theology, and metaphysics.

“A running concern I have is how reading past thinkers and texts can make us question inherited narratives about the past and rethink some of our modern unreflective assumptions,” he said. “Reading sophisticated thinkers and texts from a past age can enrich us, but only if we do not approach them with the assumption that they are only valuable when they agree with our inherited assumptions and ideals.”

El-Rouayheb said he’s enjoyed teaching two courses this year: “Introduction to Islamic Philosophy and Theology” and “Major Works of Islamic Civilization.” The first introduced major issues and arguments in classical Islamic philosophy and theology, including questions such as: How far can reason take us? How can humans be good? Does God exist? Is time eternal? The second course looked at historical texts in different genres and with different perspectives, leading “to reflections and discussions about what is ‘Islamic’ about ‘Islamic civilization.’”

“I love teaching,” Mickens said, adding it was the reason he left the private sector, where he was a researcher at Microsoft, and joined Harvard. “I like mentoring. I like forming those long-term teaching relationships with students, seeing them graduate, and then continuing to stay in touch after they go into the real world. I try to put a lot of effort into making sure that the students have fun in the classroom, but they’re still challenged, and they’re still getting pushed intellectually.”

Each spring, Mickens teaches an operating systems class that teaches students how the underlying core software that supports all of a computer’s functions enables applications to do things, such as communicating with remote web servers, storing data locally, drawing complicated graphics and visuals, and more. “I really like teaching that class because it gives students a much deeper understanding of how their computers work,” he said.