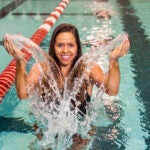 The salsa legend later told Leahy that he enjoyed the performance so much he recorded it on his phone so he could share it with his bandmates. Leahy, a native of Charlotte, South Carolina, who is concentrating in music, was moved by the gesture.

“That really encapsulates who he is,” said Leahy, who played the saxophone while Gates played bass and Teboe the piano during the performance. “He relishes in the joy of making music, in the community it fosters, and the stories it can tell.”

Sometimes called the “poet of salsa,” Blades is known for his songs about working people, political turmoil, poverty, and urban violence in Latin America. Critics have credited his music with enhancing the social consciousness of salsa, the energetic rhythm developed in New York City by Puerto Rican and Cuban musicians in the 1970s.

Filled with poetry, poignancy, and humor, Blades’ songs are imprinted in the minds and hearts of millions of people in the Spanish-speaking world. Nobel laureate Gabriel García Márquez reportedly said he wished he had written the lyrics of “Pedro Navaja,” one of Blades’ compositions and possibly salsa’s most popular song. Inspired by “Mack the Knife,” the seven-minute song is about a neighborhood thug who suffers a fatal reprisal at the hands of a prostitute on a New York City street. Many salsa fans know the lyrics by heart.

At the ceremony Blades appeared in a conversation with actor John Lithgow ’67, Art.D.’05. The singer, who was born in Panama, came to the U.S. in 1974 at age 22. He told Lithgow that his work owes a great debt to literature, particularly that of García Márquez (the two have become close friends over the years), and a long tradition of Latin American troubadours who sang of the social and political reality in the region.

The Harvard Arts Medal recognizes a Harvard or Radcliffe alum or faculty member who has made a contribution through the arts to education and the public good. In awarding the medal to Blades, who received a master’s of law at Harvard Law School in 1985, President Larry Bacow noted that bestowing the honor was a long time coming — the ceremony had to be postponed for two years due to the pandemic.

“We have an opportunity today to recognize an extraordinary artist, musician, actor, humanitarian, and public servant,” said Bacow. “One of the things Rubén and I share is that we’re both refugees from the legal profession. But we also share something else. His family had to leave Panama and like many immigrant families came to this country in search of both freedom and opportunity. My parents did exactly the same.”

Bacow recounted the story of how Blades made the transition from law to music. Blades, who studied law in Panama, couldn’t practice it in Miami, where he came to join his father and mother. When Blades moved to New York, he found a job working in the mailroom of Fania Records, known as the Motown of salsa.

“And one day, a singer got sick, and someone said, ‘There is a kid in the mailroom who can sing,’” recounted Bacow. “In my time as president, I have met many graduates from Harvard Law School. I don’t think I have ever met anyone so talented.”

Blades has won 22 Grammy and Latin Grammy awards. His last album, “Salswing!,” won the 2021 Latin Grammy for best salsa album. He is also an actor, having performed in a Broadway musical and in nearly 50 television shows and movies. He ran for president of Panama in 1994 and served as Minister of Tourism from 2004-2009. He is working on his memoirs.

Prior to the ceremony, Blades spent four busy days at Harvard. He rehearsed with the Harvard Jazz Band led by musician Yosvany Terry. He met with students to discuss their original compositions, and offered feedback as part of a series of events called CompFest — the Harvard Students Composers Festival, a production of the Office for the Arts at Harvard. He also took part in a student panel with Latinx student groups organized by the David Rockefeller Center for Latin American Studies.

At the student panel, moderated by Doris Sommer, Ira Jewell Williams Professor of Romance Languages and Literatures and in African and African American Studies, Blades spoke of his political activism through arts and of his transition from music to politics.

“An artist is a citizen,” said Blades at a Tsai Auditorium event last Tuesday evening. “Artists have a duty as citizens to try to utilize whatever influence they may have, after educating themselves on the issues, to provoke a reaction and make the changes that are needed to be made.”

Blades called on students to find ways to help their communities wherever they happen to be. “If you can find ways to contribute to the community, you will continue to be alive,” he said. “The worst thing that can happen to anyone alive is indifference. That’s where death begins. The moment you are indifferent, you are gone.”

On Thursday afternoon, Blades charmed the audience with anecdotes about growing up in Panama, his artistic career, and his time at Harvard. Accompanied by the Harvard Jazz Band, Blades performed five songs from “Salswing!,” including a roaring version of “Mack the Knife” that almost brought down the house.

Teboe, a comparative religion concentrator, was part of the “Camaleón” trio and in addition got to play with Blades himself, calling it an “absolute dream come true.” Performing with Blades required some significant advance preparation, but Teboe said, “It more than paid off when I could feel the pure joy and effervescence emanating from both the audience and Rubén himself during the performance.”