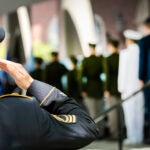 Boston mayor seeks to lead by example in Class Day address, recalling hard moments from her own life

“Your own deep truth sets the foundation for your happiness, health, and impact,” said Wu ’07, J.D. ’12, who called on the students to immerse themselves “in the work that respects your truth — that feeds it and nurtures it and encourages you to be the truest and most joyful version of yourself.”

Wu, the first person of color and first woman to serve as mayor of Boston, recalled moments of self-discovery during her time on campus, including the hard truth that a Yale student was the love of her life. (They met at The Game.) Most challenging of all, she said, was a truth that hit her in the form of fear during her own Commencement — the realization that her mother had recently started to show signs of mental illness.

Wu, the daughter of Taiwanese immigrants, said that cultural expectations made it hard to discuss her mother’s condition outside the family. It took months for her mother to acknowledge what was happening and agree to accept help, “and months after that for me to be able to talk about it with my friends. It was still the truth that was too painful to share because of the stigma that we all must be a part of breaking.”

Considered by many of her College friends the last person who would end up in politics, Wu described as life-altering the post-graduation experience of moving home to Illinois to care for her mother and her younger sisters, and opening a small business to help support the family. She learned “how so many of the systems we had to interact with weren’t designed for people like my family.” The lesson turned her toward politics.

Wu graduated from Harvard Law School in 2012 and was elected to the Boston City Council in 2013 at the age of 28, becoming the first Asian American woman to serve on the legislative body. In January 2016, her colleagues elected her president in a unanimous vote, making her the first woman of color to lead the council. During her tenure, she helped pass legislation for paid parental leave, climate resiliency, housing stability, food justice, and workers’ rights. She also helped develop the city’s Green New Deal, a roadmap for how Boston can mitigate the threats of climate change.

In her brief remarks, Wu advised the graduates to seize their own truth by discovering what gets them “excited to wake up in the morning.” Wu said she finds her “greatest meaning in building community and helping change people’s perspective on what’s possible.” She encouraged her audience to “see what is truly real,” by engaging with the world around them. In her role as mayor, Wu regularly rides the MBTA, in part because she is a “transit nerd,” she confessed, “but also because there’s no better way to get expertise in transit policy and to experience the system you’re trying to improve day in and day out.” Seek out experts who know more than you do, Wu added, and ask questions. Finally, Wu cautioned her listeners about the perils of the misinformation age, urging them to “tell the truth when it’s hard … because fundamentally, speaking truth is the only way to build a foundation for trust. And that is what we are missing in our society in our democracy today.”

In closing, she encouraged the graduates to “harvest your imaginations to focus on the good we can do when we work together. And let’s let go of our instincts to protect the status quo. And harness your leadership and charisma and knowledge to help others do the same.”

Khurana spun forward to 2036, imagining a society that “prioritized the needs and education of young people,” no longer faced threats of climate change or nuclear attacks, and embraced diversity as a “source of infinite possibility.”

“You are graduating into a world in desperate need of a bridge between the present and that more hopeful future,” he said. “And you are being called to build that bridge.”

The service also honored the recipients of the Ames Award, given annually to seniors who have demonstrated “selfless, heroic, and inspiring leadership” at Harvard. The prize honors Richard Glover Ames and Henry Russell Ames, brothers and Harvard students who died in 1935 trying to save their father after he was washed overboard during a storm off the coast of Newfoundland. This year’s winners were Farah Afify and Jordan Mubako.