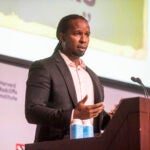 Amanda Kulik, the veteran associate head coach of the Harvard women’s swim and dive team, recalled a conversation from the Ivy Championship races in late February. “One of the other Ivy League coaches came up to us and said, ‘She is just a beam of light at this meet.’ And it was true,” Kulik said. “You could just tell how much she loved swimming for our team, loved being part of the meet, loved being a part of Harvard.”

The two were talking about Felicia Pasadyn ’22, a senior Lowell House resident, whom head coach Stephanie Wriede Morawski ’92 describes as one of the very best to ever swim at Harvard — and she only competed for two seasons. In that time, she was crowned Ivy League Champion in 10 different races, set seven program records, competed in three 2022 NCAA events, and qualified to compete in six 2020 NCAA events, which were canceled in the early days of the pandemic.

“The unique thing about Felicia is that she doesn’t take any adversity as a setback,” Morawski said. “She looks at it as a way to learn, and to grow, and to be better. That is a pleasure to coach, obviously, but it also has enabled her to be so successful.”

Pasadyn will finish her integrative biology degree in three years through the College’s Advanced Standing program. Competing at the NCAA Championships in March, her 4.0 GPA earned her the prestigious NCAA Elite 90 Award, an honor presented to the competitor with the highest cumulative average “who has reached the pinnacle of competition at the national championship level in his or her sport, while also achieving the highest academic standard among his or her peers.”

“I just feel so challenged by the people around me at Harvard,” Pasadyn said. “In the pool, to be pushed by those women has been so empowering. And in the classroom, I feel pushed by other people in office hours, and in group projects. I feel like I’m just always improving — I’ve loved getting to know people here.”

Pasadyn was sent home by the COVID-19 pandemic during the spring of her first year, and her class remained off campus for her sophomore year. She returned in the fall of 2021 as an Advanced Standing senior. “Coming back on campus, I’ve been even more grateful for what I missed last year,” Pasadyn said. “I’ve just been enjoying every moment, every random interaction in the dining hall, just the smallest little things that we couldn’t do in person last year.”

Though her time on Harvard’s campus has been significantly shorter than most, she has maximized it. In addition to her schoolwork and swimming, she serves as an Academic Resource Center Tutor Mentor and volunteers at the Harvard Square Homeless Shelter.

“She so enjoys connecting with people and brings out the best in everyone. You can tell she’s always listening to others; she’s always learning,” Kulik said.

Pasadyn serves on the Student-Athlete Advisory Council and volunteers with Project Swim, a program that teaches children with disabilities to swim. She is also deeply involved in Harvard’s Christian Impact and Athletes in Action group.

“Finding a spiritual organization on campus was really important to me because I really didn’t want to lose touch with my faith when I came to College,” said Pasadyn.

She is the youngest of four sisters, all of whom were valedictorians of their high school class and varsity athletes in college. (Felicia was Harvard swim teammates with her sister Cassandra Pasadyn ’21.) The daughters of two nurses, all four are in various phases of a medical school track.

Having retained two years of NCAA eligibility as a varsity swimmer, the Hinckley, Ohio, native will utilize one of them next year, as she competes for Ohio State University while earning her master’s degree in bioethics.

“This is her first full year on campus, and she’s a senior. Yet she’s had such an impact, not just on the swim and dive program, but on the people whom she’s touched on our team, and on our campus,” said her teammate Maddie Heilbrun ’22. “It just blows my mind that she has been able to be such a big presence for the short time she has been in College. And it’s not just about swimming or School — it’s the entire package. She’s one in a million.”