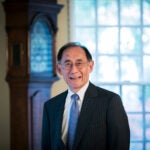 First in-person student speeches since onset of pandemic focus on privilege and responsibility, kindness and courage

Three students will deliver speeches in English and Latin at Tercentenary Theater on May 26 to honor the Class of 2022, marking the first time this revered Harvard Commencement tradition has been held in person since 2019, before the onset of the pandemic.

The students, who were selected in a University-wide competition, include Benjamin Porteous ’22, who will deliver the Latin Salutatory; Noah Harris’ 22, the Senior English Address; and Harvard Divinity School graduate Lindsay Sanwald, the Graduate English Address.

A fourth student, Caroline Engelmayer ’20, will deliver the Latin Salutatory during the Commencement Exercises to be held on May 29 to honor the Classes of 2020 and 2021, both of which had virtual ceremonies.

Many memories of early days on campus remain vivid for Benjamin Porteous. One was arriving at Annenberg, the first-year dining hall. He recalls being impressed by the ornate, cavernous 9,000-square-feet room, which can seat more than 1,000 and bears a striking resemblance to the Great Hall at Harry Potter’s Hogwarts. He also recalls being more than a little nervous.

Thankfully that didn’t last long. Porteous began feeling more at home after meeting John S. Martin, a Harvard University Dining Services worker who welcomes students at the door with a warm smile and friendly banter as he swipes in their IDs. Martin became an endearing and memorable presence in the lives of many classes of first-years, with his affable demeanor and legendary memory — he keeps at his fingertips the names of all the students he meets, their families, and even their interests.

So much so that he — and the impact he has had on students’ lives — is the subject of Porteous’ Latin Salutatory: “Iohannes de Annenberge,” or “John from Annenberg,” as he is popularly known on campus.

“Every single member of our class ate in that dining hall and went through those doors and met John,” Porteous said. “He has greeted and welcomed people. He has shown warmth, care, and genuine love for students.”

After working at Annenberg Hall for 12 years, Martin began working at Dunster’s dining hall in February. Martin and his wife have been invited to Commencement, and Porteous hopes that everybody will join in the celebration and his salute to Martin.

“Hopefully, the speech can be a little token of gratitude to him for all he has done, and by extension to all the essential workers for all they have done throughout these several years,” said Porteous, a Leverett House resident who concentrated in East Asian studies. “There are essential workers who are really dedicated, and they brighten people’s lives.”

Like the time Martin recognized Porteous when they ran into each other on campus after the pandemic restrictions were lifted. They hadn’t seen each other for two years, and the encounter moved Porteous deeply. “Without missing a beat, John remembered my name, where I was from, and that I was homeschooled,” said Porteous, who was born in South Africa and grew up in Arlington, Mass. “It was incredible.”

After graduation, Porteous plans to enter a master’s degree program in East Asian studies at Harvard and pursue a Ph.D. in comparative Latin, Greek, and Classical Chinese. He will be working as a proctor with the Dean of Students Office, a job where he hopes to follow Martin’s example to make students feel welcome and part of a community.

“In the speech, I wrote about the fact that when we first arrived on campus and went into Annenberg, it was kind of scary and daunting,” said Porteous. “And then we met John. He represents the best of what Harvard College is trying to do with creating a welcoming home for students.”

Noah Harris knows that his speech likely won’t change the world, but he hopes it will move some hearts and minds at least a little.

A government concentrator with a secondary in history, Harris will touch on themes of privilege and responsibility. As recipients of the gift of a world-class education, Harvard graduates have the responsibility of paying it forward by helping others and working to make the world a more just, equitable place, said Harris.

“There will be people in the audience who will be leading every sector of industry in this world,” said Harris, referring to the more than 6,000 students who graduate from Harvard every year. “My main message to all is that we have to uplift those in our communities who don’t have the same opportunities that we have had. While you’re on the top, think about everyone else. Lend a hand to someone else.”

For Harris, the journey from his native Mississippi to Cambridge was made possible by many family members who paved the way for him, from his grandparents, who took part in the Civil Rights Movement, to his parents, who were the first in their families to go to college. His mother, a school guidance counselor, nurtured his big dreams for the future.

“It started with my parents believing in me,” Harris said, “My mom pushed me by telling me that Harvard was possible for me.”

Inspired by his mother’s support, Harris wrote and published a children’s book, “Successville,” in his sophomore year. In it he encourages kids to dream big and tells them how to work hard to achieve them. In 2020, he was elected president of the Student Undergraduate Council, making him the first Black man elected to that position.

The Dunster House resident is slated to go to Harvard Law School in 2024. After graduation, he hopes to spend some time in public service by either doing organizing work in Mississippi or some sort of federal government work, possibly in Washington, D.C. He hopes to become a constitutional or civil rights lawyer to use the law to benefit those who lack resources.

“I’d like to be a voice for people for whom the system has not worked or have been wronged by it in some way,” Harris said. “There are systemic injustices that need to be addressed. I see people back home getting arrested and going to jail for things they didn’t do. We have a system that just doesn’t work for everyone, and I want to be part of the solution.”

Lindsay Sanwald, also known as Idgy Dean, is a feminist loop musical artist and creative producer and no stranger to the stage. Both her performance and audience at Tercentenary Theater will be a bit different from the kind of thing she is used to, but she’s still very much looking forward to it.

“I’m a performer, and I like an audience,” said Sanwald, who hails from Brooklyn, New York. “But I haven’t been able do this in the past three years. I’ve been studying at the Divinity School, essentially preaching and ministering. I’m excited to put those skills to work.”

Sanwald’s work toward her Master of Divinity (M.Div.) degree has involved studying ancient Vedic literature, early Christian thought, mysticism, and philosophy, among other subjects. In her speech she plans to call on people to rejoice at being together while urging them to acknowledge the devastation caused by the pandemic, to “marvel at the mystery of life” while accepting the “rawness and messiness of the human experience.”

“I just want to preserve the mood on this day of joy and celebration and what a miracle it is that we get to be together after being forced to be apart for so long,” she said. “I want people to feel like prophets. It is a big word, but I believe it about us. I want everybody to believe that we were put here to tell our stories, and change things for the better.”

This graduation will be particularly special for Sanwald, who was the first in her family to attend college. Sanwald viewed her time at the Divinity School as an artist residency centered around contemplative practice, and now looks forward to rejoining the world. She also teaches yoga and meditation.

After graduation, Sanwald hopes to publish a book she wrote and record an album with songs she created over the past few months. She would also like to do some touring and is determined to wait “to be called to the next thing” rather than “trying to figure it out” in an explicit way.

“I just trust that the future has a better idea of what’s waiting for me than I do,” said Sanwald. “I’ll just try to turn on the GPS and follow the hints.”

Like the hero in the Greek epic poem “The Odyssey” who returns after a long journey and revels in seeing his loved ones and his abode again, the Classes of 2020 and 2021 will return to campus this Sunday to celebrate their homecoming.

That is how Caroline Engelmayer sees it.

The classics concentrator with a secondary in history won the competition in 2020 and was asked to return this year to deliver the Latin Salutatory. Engelmayer drew inspiration for her speech in the parallels between the journey of Odysseus and that of her classmates, who had to leave campus in March 2020, 2½ months before graduation amid the onset of the COVID-19 global pandemic.

“‘The Odyssey’ stood out to me because it seemed that the Class of 2020, almost uniquely, has been on a journey in a very literal sense,” said Engelmayer. “We left campus for part of our time in college, and now we’re coming back for Commencement.”

Delivered in Latin with English translation, both on the screens and in the Commencement programs, the speech often includes humor, and this year will be no exception. “There is often a sense of classics as being a discipline that is so specialized that it requires a relatively high bar of entry,” said Engelmayer. “The idea to get to share Latin with the class in a more lighthearted way, more than people often associate with Latin, seems like a fun opportunity.”

“The Odyssey,” said Engelmayer, serves as a reflection of the experience the Class of 2020 underwent but also as a reminder of the strength they had to develop as their lives were interrupted by the pandemic. Being back after two years of journeying in the real world makes it easier to reflect and rejoice at being together again, she said.

Since graduation, Engelmayer has been teaching English and classics at Phillips Academy in Andover. In the fall of 2023, she will return to Harvard to start her Ph.D. studies in English. But for now, she wants to focus on coming back to campus to see her classmates and celebrate being together.

“We had been separated,” said Engelmayer. “We had been on our journeys, we had been away, and now we are coming home.”