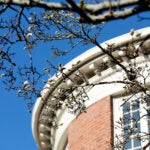 Norman Yao and the crystals of time. It has a Hollywood ring to it but has nothing to do with movies or TV (although time crystals were, in fact, featured in a recent “Star Trek Discovery” episode). Yao is a newly appointed professor of physics in the Faculty of Arts and Sciences who studies atomic, molecular, and optical physics along with condensed matter and quantum information science. An undergraduate and graduate school alumnus, Yao spoke to the Gazette about returning to Harvard, physics, and why he thinks time crystals are kind of fascinating. The interview was edited for clarity and length.

GAZETTE: You did your undergraduate at the College and finished your doctorate here in 2014 before joining the U.C. Berkeley physics faculty. How does it feel to be back?

YAO: I feel a tremendous amount of energy and excitement. It’s familiar, in a way, because I walked down these same hallways for nine years as an undergrad and a grad student. At the same time, it’s also extremely humbling to be in the same department along with many of my advisers and mentors — folks I continue to look up to and who have shaped me deeply as a scientist.

Now that I’m back, some of the most surprising connections I’m hoping to rekindle actually fall outside of the physics department. As an example — and I hope this doesn’t embarrass him too much — Roger Fu, who’s now a faculty member in the Department of Earth and Planetary Sciences, and I lived together in Greenough as freshmen. He was the “rock guy,” and I was the “physics guy.” Now, that we’ve both managed to make it back as faculty, we are actually doing research together! This kind of a “full-circle” feeling is very much in my bones as I walk around campus these days.

YAO: My interest and path in physics has really been shaped by the individuals I was lucky enough to learn from. In high school, I had a simply remarkable physics teacher — the late Mr. Michael Gilmore. He was a giant, both in terms of his passion for teaching and in the depth of his care for students. In College, I started off my first semester taking a course called Physics 16. It was taught by Howard Georgi, who’s still a pillar of the department today. I would say, perhaps more than anything else, this one class made me want to explore a career as a physicist. Howard really emphasized the collaborative aspect of doing physics and that one always had more fun doing physics together. This mantra has stayed with me for a long time.

On the research front, my undergrad years were blessed. I joined [Mallinckrodt Professor of Physics and of Applied Physics] Dave Weitz’s experimental soft condensed matter group as a freshman and never left. My specific research was focused on the rheology of reconstituted biopolymer networks, but Dave shaped every facet of my scientific being: He spent hours teaching me how to ask the “right” questions, how to analyze data like a physicist, and how to write scientific papers. My graduate years were equally blessed in the group of [George Vasmer Leverett Professor of Physics] Misha Lukin. There, I took my first steps into the realm of quantum and have continued along that research path to this day.

GAZETTE: You work in almost all aspects of quantum — from ultracold quantum gases and quantum simulation to verifying quantum advantage — but you have to tell us about time crystals. What are they and are they as cool as they sound?

YAO: The modern research on time crystals is focused on a particular class of systems, namely, those that are periodically shaken or driven. When one shakes a physical system — think Jell-O for example — the properties of that system typically mimic the frequency of the underlying shaking. In the case of Jell-O, this simply means that it would jiggle at the same rate that it’s being shaken. Time crystals are different. Their jiggling is a lot more complicated and occurs at a frequency which is a fraction of the original shaking frequency. To put this in perspective and to try to give some feeling for why it’s weird, let me use another example. Imagine three kids playing jump rope. Two are swinging the rope — think of this as the periodic driving — and the third is jumping. A fractional frequency response of the jumper would, for example, correspond to her jumping only once every two times the rope is brought around — something which clearly doesn’t work!

Another weird thing about time crystals is that such phenomena can occur in closed, many-body systems. By closed, I mean a system that can’t lose or dissipate its energy to an external environment. And by many-body, I mean a system composed of lots of interacting particles. The reason a time crystal would be surprising in such a setting is because any system that is periodically shaken should absorb energy, and if the system can’t lose this energy, it will slowly heat up. This heating is a specific example of something known as ergodicity and should eventually cause the time crystal to melt. Using this language of heating, the magic of time crystals is built upon finding a complex physical system that manages to evade the absorption of energy, despite being periodically shaken.

Now onto the hard question. How cool is it? Tough to say, but “Star Trek” sure found it cool! On a more serious note, I do think that time crystals are perhaps the simplest example of a much broader class of phenomena, namely, new phases of matter that can only arise in systems that are out of thermal equilibrium. And I find this to be pretty cool.

GAZETTE: You said before that the people have really influenced your career in physics. What’s a piece of advice that might inspire others?

YAO: Let the place shape the science, which is advice I got from a wonderful colleague. It’s really important to take a step back and survey the broad landscape of research that is happening, both at the departmental level and at an institutional level. And then to ask the following question: What tools or expertise do I bring, that when combined with ongoing efforts, will allow us to answer the hardest science questions or to make progress on the deepest puzzles in nature?