Scientific discovery gets kind of government seal of approval 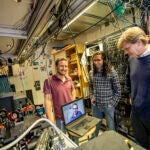 As far as memos go, this one may go down as one of the most consequential of Amir Siraj’s career.

U.S. Space Command released a communication last month that confirmed earlier findings from Siraj ’22, a Harvard astrophysics concentrator, and Avi Loeb, Frank B. Baird Jr. Professor of Science, that a meteor from another solar system hit Earth in 2014.

“I’m not sure I’ve heard of many other scientific discoveries that have had to be confirmed by the U.S. Department of Defense, but that’s how this unusual story played out,” Siraj said.

The discovery predates Oumuamua, the oblong space rock that was until now considered the first-known interstellar meteor by three years.

Known as CNEOS 2014-01-08, the meteor measured only 1.5 feet wide and was hurtling toward Earth at about 45 kilometers per second, well over 100,000 mph, which is a clue that it’s not from this solar system. The meteor ignited into a fireball on Jan. 8, 2014, when it entered Earth’s atmosphere off the coast of Papua, New Guinea, with the energy equivalent to about 110 metric tons of TNT. It may have sprinkled fragments into the Pacific Ocean. CNEOS 2014-01-08 is now the third interstellar object that has been confirmed, along with Oumuamua and the comet 2I/Borisov.

The 2014 meteor was originally identified as an interstellar object by Siraj in 2019 when he and Loeb were studying Oumuamua. The pair posted their findings as a preprint and submitted their results to an astronomy journal, but the paper was not accepted for publication because they used data from a NASA database that used classified information that could not be verified.

The memo was signed by U.S. Space Force Lt. Gen. John Shaw and sent out in a tweet. It provides official verification of their findings. It states that Joel Mozer, chief scientist of Space Operations Command, reviewed the Siraj and Loeb’s analysis and confirmed the findings to NASA.

6/ “I had the pleasure of signing a memo with @ussfspoc’s Chief Scientist, Dr. Mozer, to confirm that a previously-detected interstellar object was indeed an interstellar object, a confirmation that assisted the broader astronomical community.” pic.twitter.com/PGlIOnCSrW

Siraj found the meteor as he combed through a database of fireballs kept by NASA’s Center for Near Earth Object Studies (CNEOS) on Loeb’s suggestion. He saw something that immediately grabbed his attention.

“It’s not that meteors of this size are unusual,” he said. “We actually get a couple dozen each year. But what was unusual about this meteor was that this object had a very high impact speed and the unusual direction at which it encountered our planet.”

At Earth’s distance from the sun, any object moving faster than about 42 kilometers per second is too fast to be captured by the sun’s gravity, Siraj explained. Anything traveling over this speed limit likely comes from interstellar space because the gravity from our sun acts as a celestial speed bump to stop more local meteors from gaining that kind of speed. The 2014 meteor must have been ejected from another neighboring star and sent our way if it was traveling with such velocity.

Siraj and Loeb ran many calculations and found that the meteor had caught up to Earth from behind its orbit before entering the atmosphere and likely had a speed closer to 60 kilometers per second relative to the average velocity of nearby stars, or about 134,000 miles per hour at some point.

The problem that snarled the paper’s acceptance at peer review was that they couldn’t directly confirm the margin of error on the fireball’s velocity because the CNEOS database doesn’t have the information needed to confirm it.

The snag started a three-year process as Siraj and Loeb worked through a bureaucratic logjam to receive government confirmation on their findings, working with scientists and officials at NASA, Los Alamos National Laboratory, and other offices. They eventually connected with Matt Daniels, assistant director for space security at the White House’s Office of Science and Technology Policy, to get an analysis from Shaw and Mozer.

Siraj said the hard part is over, but there’s a lot more to do now, like getting the paper published in a peer-reviewed journal and doing follow-ups. For instance, the researchers are currently looking into an ocean expedition to search the ocean floor off the coast of Papua New Guinea for pieces of the 2014 meteor.

“If we were able to recover any fragments from this meteor, it would represent the first time that humanity has ever touched a rock from beyond our solar system,” Siraj said.