Good with left brain but invested in right as well 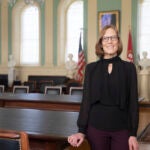 Brian Bertrand has been following two very different paths, one focused on the arts, the other devoted to quantitative data. But he plans to combine them to drive real change. The native New Yorker hopes to use what he learned in Harvard’s Theater, Dance & Media program (TDM) and studying for his degree in statistics to help arts organizations maximize their success.

“Ten or 15 years down the road when I’ve built up enough experience, I’d like to pivot from business to arts consulting,” said Bertrand, “because that’s an area where I really think I can make a difference in the way they’re managed and supported, financially and otherwise.”

Science was a natural fit for Bertrand. The son of two engineers, with two older brothers interested in STEM, it was only a matter of time before he embraced the scientific method. It didn’t take long. He delighted in the science kits he received as a child and loved competing on middle and high school Science Olympiad teams, building miniature cars powered by mousetraps or fishing rods.

An interest in the arts blossomed a little later. Bertrand was part of the debate team as a teen, and the experience on stage inspired his interest in high school plays and musicals. Then came a summer trip to Hong Kong to study art. “With the addition of theater, with the addition of art,” he said, “I realized I wanted to include that more in my life.”

When considering colleges, Bertrand found Harvard’s emphasis on liberal arts education matched his desire to “learn as much as possible about as many things as possible.” Still, as a student he worried about how his love for the arts would fit with his passion for the sciences. Then he found the TDM program. Memories of the introduction to acting class he took his first year are still fresh in his mind. Taught by a dynamic lecturer, Johnny Kuntz, it was filled with students with a range of interests, all eager to engage, and he said it left him better prepared to navigate the world.

Statistics classes gave Bertrand, a math whiz, an entirely different set of tools. He calls Stephen Blyth “one of the best lecturers I’ve ever had” and an “icon in the field of quantitative finance and statistics,” and agrees with those who say Blyth’s statistics class on quantitative finance changes how you look at the world. “It’s 100 percent true,” said Bertrand. “Probability rules our lives.”

During his Harvard time Bertrand blended his statistics courses with more classes in TDM. A sports fanatic, he also explored how home-field advantage helps NFL teams; he acted in a number of student shows; and served as a peer advising fellow helping incoming students transition to College life. “It’s one of the most rewarding things I’ve done on campus,” he said of his advising role.

Like all members of the class of 2022, Bertrand’s Harvard time was interrupted by the pandemic. He opted out of Zoom theatrical productions, but he kept engaged with his acting friends and even moved back to Cambridge last year to live with his block mates and be close to school.

Debra Levine, who directs TDM’s undergraduate studies program, said the arts need more people like Bertrand who understand “how central the arts are to the world at large.” Bertrand recognizes that while statistics can “observe and record what is happening, and make certain kinds of predictions,” he knows the arts “observe human behavior in a much different way,” she said.

Levine said she loved working with Bertrand and that he helped her see the value of TDM in a new light. “I feel like he’s given me real insight into the potential for TDM at Harvard … that it really does help us create so many allies so that the future of arts and arts in education is really ensured.”

With a job lined up in New York City after graduation, Bertrand’s focus will be on management consulting for the near future. He’s interested in business school, but his long-term goal, he said, is to take what he’s learned in the business world and apply it to the arts. “It’s something I just care deeply about doing, because theater, just as a human experience, there’s nothing really comparable,” he said, “and it needs to be supported.”