Gates recognized by University of Cambridge 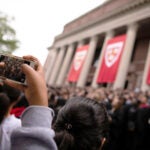 The University of Cambridge awarded literary scholar Henry Louis Gates Jr. the honorary degree of doctor of letters (Litt.D.) in recognition of his contributions to the history of African American literature.

The award celebrates Gates’ scholarship and numerous accomplishments in the field of African American studies, said Professor Stephen J. Toope, Cambridge’s vice chancellor, in an email to the Gazette.

“The University of Cambridge offers honorary doctorates to individuals of outstanding international achievement in their field, and Skip’s credentials are impeccable,” said Toope.

“His contributions to the history of African American culture, and in particular his inclusive approach to African American literature, have been enlightening and enriching. This award celebrates his scholarship while also reinforcing his ties to our collegiate university.”

Known affectionately as “Skip,” Gates will receive the prestigious award in the University of Cambridge’s annual Honorary Degree Congregation to be held in June after a two-year wait. Gates and seven other honorands would have been admitted to their honorary degrees in June 2020, but the event was canceled then, as well as the following year, due to the COVID-19 pandemic. In an exceptional measure by the university, said Toope, the 2020 nominees were conferred their degrees in absentia in May 2021 with “the firm intent that they should be formally presented for those degrees to be celebrated at a future Honorary Degree Congregation.”

For Gates, the Alphonse Fletcher University Professor and director of the Hutchins Center for African & African American Research, who has received nearly 60 honorary degrees and numerous awards in his more than 40 years as a writer, scholar, filmmaker, professor, and public intellectual, the honorary doctorate from the University of Cambridge, his alma mater, is “the most special.”

“All honors are a blessing, of course, but it is difficult to imagine one more meaningful than recognition from one’s alma mater,” said Gates. “Certainly, one of the happiest days of my academic life was the day I learned that the English faculty at Cambridge had approved my Ph.D., similar in pleasure to being admitted to Yale as an undergraduate in 1969 and being hired by Derek Bok and Henry Rosovsky to help rebuild the Department of Afro-American Studies (as it was called then).

“But the day I received an email from Cambridge about the honorary degree rivals those moments in sheer joy because it was entirely unexpected. I never even dreamed that this was a possibility. I don’t think that anything could have surprised me more. It is profoundly humbling.”

The road to becoming a scholar in African American literature began at Cambridge, said Gates. “Going to Cambridge was pivotal in my career,” he said.

At Cambridge, Gates met Wole Soyinka, a Nigerian playwright, poet, and novelist who was awarded the 1986 Nobel Prize in literature and was then an honorary fellow at Churchill College, and Kwame Anthony Appiah, a British-Ghanaian philosopher and novelist, who, like Gates, was an undergraduate at Clare College. The three formed a strong bond and friendship over studies of African literature and African history. Both Soyinka and Appiah encouraged Gates to change his life path. The University of Cambridge will also award honorary degrees to Soyinka and Appiah in the June ceremony.

“Soyinka and Appiah each in their own way inspired me to start thinking about the possibilities of embarking on a career as an academic, which I had never considered before,” said Gates. “It had never crossed my mind. I had been raised to be a doctor. And then one night at dinner with the two of them, they both said to me, ‘You’re not going to be a doctor. You were put on this earth to be an academic and teach African and African American studies.’ They recognized an interest that I had not admitted to myself. And, to my own astonishment, I believed them.

“This is an award that I will accept in honor of them, their seminal influence on the shape of my career, and our deep and abiding friendship, a friendship almost half a century old,” said Gates.To show his appreciation to Cambridge, Gates raised $300,000 for a prize in honor of Alexander Crummell, the first Black student who graduated from the university in 1853.

“I wanted to honor the first African American graduate of Cambridge University,” said Gates. “This is a way of paying homage to the ancestors for this marvelous thing that happened to me, a way, as they say, of paying it forward.”

Gates is the first African American man who was been awarded an honorary degree from the University of Cambridge, which is the world’s fourth-oldest university. Opera singer Jessye Norman became the first African American woman to receive an honorary degree from Cambridge in 1989. Other honorands include Jane Goodall, Archbishop Desmond Tutu, and Stephen Hawking.

A 1981 recipient of a MacArthur Foundation’s “genius grant,” Gates became the first African American scholar to be awarded the National Humanities Medal in 1998. A prolific scholar, he has authored or co-authored 25 books, including “The Signifying Monkey: A Theory of African American Literary Criticism” in 1988, “Stony the Road: Reconstruction, White Supremacy and the Rise of Jim Crow” in 2019, and “The Black Church: This Is Our Story, This Is Our Song” in 2021.

Last year, PEN America, the literary and free-expression group, honored Gates with its 2021 PEN/Audible Literary Service Award. Also last year, Gates and his colleague Annette Gordon-Reed, Carl M. Loeb University Professor at Harvard, were inducted into the British Academy, the United Kingdom’s national academy for the humanities and social sciences, in recognition of their contributions.

Gates has also produced more than 20 documentary films that shed light on African American history and the African American experience, including “The African Americans: Many Rivers to Cross,” “Reconstruction: America after the Civil War,” and “Finding Your Roots,” a genealogy and genetics series aired on PBS.

The University of Cambridge plans to present the award at the annual Honorary Degree Congregation, which celebrates the outstanding achievements of individuals around the world. Following tradition, Gates and the other seven honorary graduates will be honored with the customary Latin speeches, due ceremony, and music.