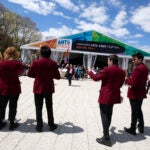 ‘Arts First has come back to life’

At a meeting of the Faculty of Arts and Sciences on May 3, 2022, the following tribute to the life and service of the late Emmanuel Farhi was spread upon the permanent records of the Faculty.

Emmanuel Farhi, a deeply revered member of the Harvard Department of Economics, was the leading macroeconomist of his generation. Farhi was admired for his supreme intellectual abilities (he was once described by one of his mentors at the Massachusetts Institute of Technology [MIT] as “a gift to humanity”) but will also be remembered for the curiosity, enthusiasm, and rigor with which he approached his work, as well as by the sensibility and sensitivity he displayed in all his endeavors. He was unabashedly theoretically minded, but he was not a “theorist’s theorist”: he strove to study and design economic policies that could help the world.

Farhi grew up in Paris. His father, André Farhi, was a development economist who escaped religious persecution in Egypt and died at a young age in France. The Farhi family was a prominent Jewish family in Egypt, Lebanon, and Syria. Farhi often told tales about his ancestor, Haim Farhi, who was adviser to Ottoman Jazzar Pasha in Acre. Emmanuel’s mother, Danièle Debordeaux, is a social policy specialist.

Farhi’s intellectual prowess was evident from a very young age. At 16, he ranked first in physics in the Concours Général, the most prestigious French high school academic competition. He later studied at Lycée Louis-le-Grand and École Normale Supérieure and served as an assistant to Cédric Villani, the 2010 Fields medalist. Farhi could have easily pursued a successful career in physics or mathematics, but, perhaps due to his parents’ influence, he was deeply motivated by social and economic problems, so he chose economics instead and moved to the United States to study for a Ph.D. in Economics at MIT. Despite his analytical abilities, even during his years at MIT, he wavered about his future and seriously contemplated a career as a top civil servant within the elite French Corps des Mines.

Farhi completed his doctoral thesis at MIT under the supervision of Ricardo Caballero and Iván Werning, both of whom became long-time collaborators of his. He was lured by Harvard in 2006, was swiftly promoted to full professor in 2010, and then became the Robert C. Waggoner Professor of Economics. His dazzling academic career was punctuated by numerous prizes and recognitions, including the 2011 Malinvaud prize from the French Economic Association and three prizes for economists under the age of 40 — the 2009 Bernácer Prize for the best European economist in macroeconomics and finance, the 2013 Best Young Economist prize by Le Monde and the Cercle des Économistes, and the 2013 Banque de France and Toulouse School of Economics junior prize for distinguished research in monetary economics and finance. He was also elected a fellow of the Econometric Society in 2015.

Despite his short career, his contributions to economics are too numerous to describe in a succinct memorial minute. Together with Iván Werning, he made pathbreaking contributions to optimal fiscal policy and to New Keynesian macroeconomics, with their work proving to be of particular relevance to policy making in his beloved Europe. Farhi made numerous trailblazing contributions to open-economy macroeconomics. His early work on global imbalances with Ricardo Caballero and Pierre-Olivier Gourinchas remains his most influential work, but his work on fiscal devaluations and debt crises with Gita Gopinath and others also received a lot of attention in policy circles. Within international finance, his work with Matteo Maggiori on the international financial system exemplifies Farhi’s broad range of interests in economic theory, economic history, and economic policy, while his work with Xavier Gabaix on rare disasters and exchange rates illustrates Farhi’s interest in financial aspects of the macroeconomy, a topic which also motivated much of his work on macroprudential policy with Jean Tirole. In the last years of his life, Farhi embarked on a novel and immensely influential research agenda, mostly co-authored with his former student David Baqaee, on the role of economic networks in shaping macroeconomic fluctuations, with implications for the design of macroeconomic policy during the Covid-19 pandemic.

Farhi worked tirelessly on his scientific work but was also keen to engage and contribute to public service. He was a member of the French government’s Council of Economic Advisors (2010–12) and, more broadly, was deeply involved in French intellectual life. Beyond his pathbreaking contributions to economics and to economic policy, Farhi will be remembered for his work in mentoring and fostering the next generation of macroeconomists. His passing was a significant loss for his many former students and, more broadly, for the many young and less young researchers who admired him and viewed him as a role model.

The Arabic name Farhi (فَرْحى) means happy, joyous, or content. Although at times Farhi had a somewhat melancholic demeanor — and he was by no means an always content individual — he certainly tried to make the most of his limited time in this world, and we all miss his boisterous laughter that frequently resonated in the corridors of Littauer. He was a sportsman and regularly played highly competitive games of tennis and squash. He was an avid reader and loved to debate about economics but also about politics, literature, movies, and arts — preferably around good food and a nice bottle of wine. He will be sorely missed.