Blazing her own path 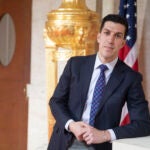 For Lucy Wickings, a homeless, first-gen student, it was all uphill. Next she’s looking to help others

As the second-oldest of seven, Lucy Wickings is determined to show her brothers and sisters the types of opportunities available outside of their hometown of Port Huron, Michigan, and why it’s important to branch out of their comfort zone.

“Two [of the] years that I’ve been here have been really weird because of the pandemic. But I always imagined at some point that they would come and see the School,” said the 22-year-old graduating senior, who concentrated in social studies and women, gender, and sexuality. “I want them to know that out-of-state college is something that they can do. Most of them have expressed that they don’t really have an interest in going to college, [but] moving to a new place is an option. I want them to be able to see it.”

Wickings, who describes herself as homeless, has made the most of her time at Harvard, with imposter syndrome making the transition particularly tough. As a first-year, she participated in the FYRE pre-orientation program for underrepresented students, which she would later help run as a team leader. The Currier House resident also worked various jobs, including Education Support Services Dorm Crew and with an after-school program.

“I think being here has softened me in certain ways to being around people I wouldn’t have thought I’d have so much in common with. I’ve also learned in profound ways that the things that make us different are just as important as the similarities we might be surprised by,” she said. “There wasn’t much economic diversity where I grew up, so I’ve had a hard time fitting in here. But the more I’ve met people who I thought always had so much ‘more’ than me, I’ve realized that we sometimes have very similar struggles, fears, and hopes for ourselves and our families.”

Raised by a single mother, Wickings examined her upbringing in her senior thesis titled “Single (M)Otherhood, ‘It’s Difficult, But I Can Do It’: Community-Building Practices for Single Mothers in Southeast Michigan.” She said that despite being estranged from her mother, the topic remained important to her because she was familiar with the community.

Wickings channeled those same experiences in her navigation of Harvard and the pandemic, according to her adviser, Jonathan Hansen, senior lecturer on social studies and faculty associate at the David Rockefeller Center for Latin American Studies.

“From the day I first met Lucy, I sensed that she marched to the beat of her own drummer. Having grown up without the privilege of many of her peers, she possesses inner strength and self-direction,” Hansen said, adding that Wickings’ fearlessness in acknowledging vulnerability has also made her an effective student leader and peer counselor.

Wickings said she has formed “incredible” friendships with her Harvard peers, but the most important people in her life are her siblings — Aubrianna, 23, Michael, 20, Gabby, 18, Chase, 15, Grace, 13, and Jessella, 5.

“My siblings are the people I’m closest to in general,” Wickings said. “There’s so many of them, even if a couple aren’t getting along, there’s always people who are there for you, which I really love.”

Wickings said it was important to have as many siblings come to Harvard to watch her graduate as possible. To make it happen, she put together a GoFundMe to pay for transportation, food, and other expenses. Her family’s hotel accommodations were covered by a gift from the Financial Aid Office, an offer available to most highly aided students.

Some will not be able to attend Commencement due to other commitments, she said. But Chase, Grace, and Jessella will be attending with her grandfather and stepmother.

“Though there is much at a school like Harvard that can be alienating, Lucy was able to identify, access, and take advantage of Harvard’s strengths. This is no mean feat. She emerges from College at once committed and empowered to contribute to the cause of justice and equity at home and abroad,” Hansen said. “I cannot wait to witness her next and subsequent steps. My generation has left the world a mess. Lucy leaves me hopeful that progress is yet possible.”