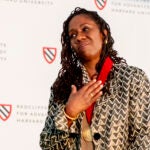 The Classes of 2020 and 2021 finally got their day under the trees of Tercentenary Theatre Sunday morning, having missed out on the pageantry and rituals of Commencement after the pandemic forced graduations online over the past two years.

For the University’s second Commencement in four days, nearly 9,000 of the graduates RSVP’d their plans to return to Cambridge for the full cap-and-gown experience and to hear featured speaker U.S. Attorney General Merrick Garland ’74, J.D. ’77 make a plea for more to embrace public service for at least some part of their lives at a time when the nation’s democratic institutions face historic threat.

“Don’t let your generation be defined by the pandemic,” he said in an address that was both personal and often impassioned. “Let it be defined by public service.”

A longtime public servant himself, Garland, 69, spent decades as a top Justice Department official and federal judge before President Barack Obama nominated him to the U.S. Supreme Court in 2016 following the death of Justice Antonin Scalia, only to see his nomination blocked by Senate Republicans. (“Life doesn’t always turn out the way you expect,” Garland joked. “Trust me on that.”) He was sworn in as President Biden’s pick for Attorney General in March 2021.

Garland touched on the three recent mass shootings, calling them “horrific attack[s]” by gunmen in Uvalde, Texas; Laguna Woods, California; and Buffalo, New York. “These tragedies only underscore how urgent the call to public service for your generation truly is,” he said.

While there are many ways to serve and many problems to resolve, the ongoing threats to democracy and democratic institutions, both in the U.S. and abroad, make the need for broad participation “especially urgent,” he said.

Russia’s invasion of Ukraine is a clear threat that should unify Americans and their international allies. In the U.S., democracy is being imperiled by efforts to undermine the right to vote and violence and threats of violence toward people “because of who they are or how they serve the public,” whether it’s on an airplane or in a restaurant or administering local elections, serving on a school board, or working as a journalist, he said.

“In a democracy, people vote, argue, and debate — often loudly — in order to achieve the policy outcome, they desire,” he said. “But the promise of democracy is that people will not employ violence to affect that outcome.”

Decisions by the U.S. Supreme Court over the last decade have “significantly weakened” many of the “important tools” that the Voting Rights Act of 1965 gave the Justice Department to protect the rights of eligible voters from racially discriminatory practices, he said.

Since then, there’s been a “dramatic increase” in legislation to make it harder for “millions of eligible voters” to cast ballots and choose their representatives. “Those efforts threaten the foundation of our system of government — and there may be worse to come,” he said, noting talk among Republican politicians to give state legislatures the power to set aside the choice of voters.

“When I was sitting where you are sitting today,” he told the graduates, “there were many things to worry about, but it never occurred to me that the right to vote would again be threatened in this country.”

Garland spoke of the dangers of the Jan. 6 attack on the Capitol, which took place as Congress prepared to certify the vote count of the Electoral College. The “proceedings were disrupted for hours, interfering with a fundamental element of American democracy: the peaceful transfer of power from one administration to the next.”

He drew a straight line between the Department of Justice’s original mission — to combat white supremacists, like the Ku Klux Klan, who used violence to prevent Black Americans from voting and exercising other constitutionally protected rights — and the Department’s ongoing prosecution of those involved in the Capitol attack.

“A democracy cannot survive if its citizens forsake the rule of law in favor of violence or threats of violence,” he said. “We are all in this together. We must protect each other.”

He reiterated remarks he made in January, saying prosecutors would “hold accountable everyone who was criminally responsible for the Jan. 6 assault on our democracy.” Garland has drawn criticism for what some perceive as the department’s focus on low-level attackers and not on White House or Trump campaign officials.

The House Select Committee investigating the assault will hold public hearings next month.

Resilience and relief were top of mind for graduates and administrators alike.

“Sending you home in March of 2020 is one of the hardest things I have ever done. At the time, I never imagined that the pandemic would disrupt campus life for close to two years and would necessitate canceling not one, but two Commencements,” President Larry Bacow told the happy graduates and their elated family members. “Thank you all for … giving us the opportunity to provide you with the proper sendoff that you so richly deserve.”

“Your time as students — though not what you would have wished, though not what any of us would have wished for you — coincided with this institution at its best. We were reminded of something that has been true of Harvard since its earliest days: We rise to the challenge. Whatever the world throws at us, we meet that challenge, and you did. I could not be prouder of each and every one of you.”

The 2020 and 2021 Commencement speakers, Martin Baron, former executive editor of The Washington Post, and Ruth Simmons, Ph.D. ’73, president of Prairie View A&M University in Texas and a leading voice in higher education, were also on hand. Baron received an honorary degree awarded to him in 2021. Joining him were the other 2021 honorands: Arlie Hochschild, University of California at Berkeley sociologist; Margaret Marshall M.Ed ’69, retired chief justice of the Massachusetts Supreme Judicial Court; Sebastião Salgado, Brazilian photojournalist and documentary filmmaker; and Anna Deavere Smith, award-winning actor and playwright.

In a break from tradition, one student from each School thanked the many people, especially Harvard staff and faculty members, who worked diligently throughout the last two years to make remote learning and the return to campus successful and safe.

“Members of the Class of 2020, members of the Class of 2021, you need not be challenged further — at least during your time at Harvard,” Bacow said. “May you proceed from this space connected to one another, steeled by your experience, more confident and resilient, and ready to meet whatever the world throws at you in the future. Take what you have learned during your time here and use your education to leave this imperfect world better than you found it. I have great confidence that you will.” 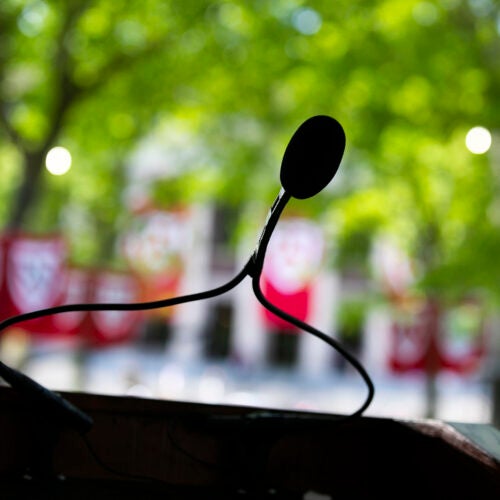 Break down walls. Vanquish villains. Stand up and speak out. Facts and truth matter.