Victory of perseverance, vision over more than decade of challenges 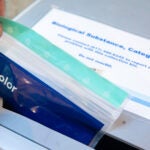 There’s a saying on the wall in Kimberly Woo’s apartment, visible just over her right shoulder during a recent Zoom call. It reads: “Went to hell and back, but it was worth it.”

“It’s very emblematic of me,” said Woo, 38, who officially finished her degree in the fall of 2020 after two different stints at Harvard 10 years apart. She is hoping to be back on campus in May to celebrate her Commencement, which was postponed due to COVID.

Being able to rebound when life throws up major obstacles is nothing new for Woo. As a teen, she was a strong student. She enrolled at Phillips Exeter Academy after receiving a scholarship in part to get away from what she called “a difficult family situation.” But she struggled to find her footing at the elite boarding school.

“There was a really big disconnect for me. I had run with a lot of rougher kids in the space between junior high and high school who were deeply different than the kids at Exeter,” said Woo, who dropped out in 2001 during her sophomore year. “I had never been exposed to that sort of wealth, or the absolute difference in culture that comes with that socioeconomic status. And it was new for me to struggle with academics. It just didn’t click at all.”

Away from school, her life began to unravel. She started drinking, taking drugs, and “hanging out with all the wrong people.” Then she got pregnant. It was “absolute hell,” said Woo who also experienced homelessness for a brief period. When her boyfriend left her in 2003, she found herself alone in East Boston with her 18-month-old daughter, scrambling to make ends meet. Then a job with AmeriCorps offered her hope.

“I was surrounded by people who were immersed in higher education, who were living that life, and they inspired me to go back to school,” said Woo, who enrolled at Bunker Hill Community College with help from a nonprofit that provides support to single parents pursuing their degrees. She also tried her hand at policy work, advocating for child-care vouchers for parents in school full-time. And she began crafting a long-term plan to attend her “fantasy school” and use knowledge gained through her own struggles to help others.

“I felt like if I could go to Harvard, to this place with all this notoriety and amazing people, I could take this difficult real-world experience that I’d had, get better at the policy piece, and learn from an academic side how it all works,” she said. “I thought if I could bridge this gap between what we conceptualize and intellectualize at Harvard, really bring my life to that, I could find a way to serve people.”

Woo arrived on campus in 2007 excited but unprepared for the demands of motherhood and a full course load. Juggling her daughter’s care, traveling from her home in East Boston to Cambridge and back, her studies, and her part-time job proved too much, and she left after only one term. Looking back, Woo wishes there’d been a bit more help available. “Harvard was really excited about bringing in some nontraditional students and expanding the student body to be much more inclusive,” said Woo, “but I don’t think they were ready yet to support those students on the ground.”

She spent the intervening decade trying to make ends meet, raising her daughter, Amarrah, and fighting a difficult custody battle. But Woo never stopped thinking about college. “I knew in my heart of hearts I would not feel content with anything but Harvard … I wanted to finish, and I really wanted to role model that for Amarrah.”

She finally made her way back to campus in 2017, but it took some adjusting. Though Woo’s schedule was more flexible, she found it strange taking classes with students who were only a few years older than her teenage daughter, and she struggled to keep up with the demanding coursework. But she also felt more supported. “I was really thankful that Harvard had listened to students from different backgrounds and different family situations, and made important changes,” said Woo.

She says a class with Caroline Light on the history of emotional labor and one with Manja Klemenčič on higher education were two of her favorites. They helped her hone her critical-thinking skills, she said, and understand how to view her own experiences in a wider context. “I think that’s what I was looking for this whole time, a way to be able to bring life and academia together into something meaningful,” said Woo.

“Through her openness and her strength and really wanting to get as much out of Harvard and using me as a resource, I learned a lot about how to support her but also how to support so many more students who have arrived at Harvard after taking a non-traditional path,” said Laura Chivers, resident dean of the Dudley Community, which serves undergraduate students like Woo who are living outside Harvard’s House system.

“She’s made it through every challenge she’s ever had,” Chivers added, “and seeing her be able to take out of every opportunity the good things, as well as the lessons, to be able to grow and be an even more amazing, strong person is just really incredible.”

Since she graduated, Woo has been focused on helping her daughter prepare for her first year at UMass Amherst. She’s also been busy applying for jobs, hoping to find a position that will allow her to continue her advocacy work around social policy.

Like the saying on her wall, Woo knows her life has been hard, but she also knows the challenges she’s faced have made her stronger.

“Every single bit of the drama and sadness and work and effort and exhaustion, and hellish all-nighters, all of that, I wouldn’t trade it for the world,” said Woo, adding, “I’ve grown more in my time at Harvard than I could ever have asked for and gotten more out of this experience because of the time I’ve taken away, than I ever could have if I’d done it in one shot.”