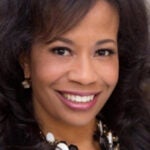 Nonprofit leader and former Overseer will begin on July 1

Elected at a meeting of Harvard’s governing boards on April 3, Palandjian will join the Corporation on July 1.

“Tracy Palandjian is an outstanding Harvard citizen, strongly committed to excellence in education, widely experienced in nonprofit leadership and governance, and deeply dedicated to how universities can serve the world,” said William F. Lee ’72, senior fellow of the Corporation and chair of its governance committee. “She’s also an extraordinarily good colleague, someone who knows Harvard and our community well and who’s always willing to answer the call to serve. She has been one of Harvard’s most engaged and thoughtful alumni leaders in recent years, and I know that her insights and perspective will contribute a great deal to the Corporation’s work.”

Palandjian’s appointment will fill the vacancy on the Corporation created by the departure of Lee, who will conclude his service on June 30 after 12 years, the last eight of them as the Corporation’s senior fellow. In February, Penny Pritzker ’81, a Corporation member since 2018, was named to succeed Lee as senior fellow starting on July 1.

“Harvard changed my life,” said Palandjian. “It has shaped my ideals, instilled a sense of responsibility that guides my work, and given me lasting roots in this community and country. I am deeply honored by the opportunity to join the Corporation and continue my service to an institution that means so much to me. I look forward to working with President Bacow, the leadership team, and the governing boards to build on Harvard’s unique history of excellence in education, research, and commitment to a better world.”

Palandjian is co-founder and CEO of Social Finance, a national nonprofit organization dedicated to mobilizing capital to catalyze progress in areas including education, health, housing, and economic mobility. Founded in 2011, her firm has pioneered the use of innovative public-private partnerships and investment strategies, including social impact bonds and career impact bonds, aimed at enhancing opportunities for members of low-income and historically marginalized groups. Earlier in her career, she was a managing director at the Parthenon Group, where she launched and led the firm’s nonprofit consulting practice.

At Harvard, Palandjian served on the Board of Overseers from 2012 to 2018, rising to become vice chair of the board’s executive committee and chair of both its committee on schools and its subcommittee on visitation. Her wide-ranging Harvard governance experience also includes service as an Overseer member of the presidential search committee in 2017-18, as a member of the Corporation committee on finance, and on the visiting committees for Harvard Business School, Harvard College, the Division of Continuing Education, the Harvard Kennedy School of Government, and the Sociology Department. She has also served as a member and chair of the Harvard Alumni Association’s Committee to Nominate Overseers and Elected Directors.

Broadly engaged in nonprofit governance locally and nationwide, Palandjian is a director of the Boston Foundation, one of the nation’s oldest and largest community foundations, and a trustee of the Surdna Foundation, where she chairs the investment committee. She also serves on the board of Mass. General Brigham. Her prior board service includes roles as a trustee of Milton Academy, chair of the board of Facing History and Ourselves, and co-chair of the board of the Robert F. Kennedy Center for Justice and Human Rights. In recognition of her efforts to improve the lives of children and families, Palandjian received the Embracing the Legacy Award from the Robert F. Kennedy Children’s Action Corps in 2018. She also received the Harvard Business School’s Alumni Achievement Award in 2019.

Beyond her executive role at Social Finance, Palandjian writes and speaks widely about impact investing and policy innovation. She also serves as vice chair of the U.S. Impact Investing Alliance and a trustee of the Global Steering Group on Impact Investing.

Known formally as the President and Fellows of Harvard College, the Harvard Corporation, chartered in 1650, exercises fiduciary responsibility with regard to the University’s academic, financial, and physical resources and overall well-being. The 13-member Corporation is one of Harvard’s two governing boards. Members of the other, the Board of Overseers, are elected by holders of Harvard degrees.