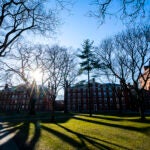 Nearly three years after announcing an effort to accelerate teaching and scholarship in ethnicity, indigeneity, and migration by prioritizing and investing in a cluster of senior faculty, the Faculty of Arts and Sciences announces its first, much-anticipated hire: Taeku Lee.

A leading scholar on racial and ethnic politics, identity formation, and inequality, Lee’s appointment as the inaugural Bae Family Professor of Government reflects Edgerly Dean of the FAS Claudine Gay’s commitment to growing and strengthening teaching and research capacity and ensuring students have access to knowledge on issues of public consequence.

“I am thrilled to welcome Taeku, who is a true intellectual leader in this rich, dynamic area of inquiry and a scholar I personally admire. His presence in our academic community marks a big step forward in achieving our goal to expand the study of ethnicity, indigeneity, and migration, and to create momentum around research on race and inequality,” she said.

At a time when momentum for EIM is growing across higher education, Gay hopes these hires will be a catalyzing intellectual moment for the FAS — and for the field more generally. Lee’s appointment builds on additional efforts to amplify teaching and research on racial and ethnic inequality in the FAS. In addition to the cluster hire, Gay established and welcomed the first Harvard College Visiting Professor in EIM, Vivek Bald, whose work examines histories of migration, particularly in the South Asian subcontinent, to the Department of African and African American Studies. Gay also expanded the Inequality in America postdoctoral fellowship program to four (previously two) early career scholars whose work focuses specifically on racial and ethnic inequality.

The South Korea-born Lee, who taught as an assistant professor of public policy at Harvard Kennedy School from 1997-2002, will return to Cambridge July 1. Future hires of faculty working in Asian American, Latinx, and Islam in America/Muslim American areas will complement Lee’s new position.

“What excites me so much is I’ll be joining one of the pre-eminent political science faculties anywhere and that I’m getting in on the ground of this genuinely inspired EIM initiative,” said Lee. “It’s a culmination of many things I’ve dedicated my career to, and to be part of a group of faculty to figure out what form that inspiration takes at Harvard is well worth the next chapter of my career.”

“Taeku will bring to Harvard both an exciting and innovative research and teaching agenda on issues and populations too long underrepresented in our scholarly agendas and curriculum. He has done outstanding work in the study of race and politics in the U.S. and is the leading voice in empirical research on Asian American politics as one of the central scholars launching national surveys of the electoral behavior as well as the political views and identities of Asian Americans.”

Lee grew up in rural Malaysia, lower Manhattan, and suburban Michigan. He earned his Ph.D. at the University of Chicago, and his Master’s in Public Policy from Harvard Kennedy School. For the last 20 years, he has taught at UC Berkeley. He serves on the National Advisory Committee for the U.S. Census Bureau and as a senior fellow of the AAPI Civic Engagement Fund. Current projects include the upcoming (fall) publication of a co-authored undergraduate textbook on race and American democracy with Cambridge University Press; ongoing work on Banklash, which examines public opinion on financial regulation in six countries; and research on Asian American identity and discrimination.

The Bae Family Professorship is part of a recent larger gift from Asian American alumni to support Asian American Studies. In addition to supporting the cluster EIM hire, it will invest in EIM visiting scholars as well as the Inequality in America postdoctoral fellow program.

“When I was a grad student here in the late 1980s, I was a small part of a movement back then among students demanding some faculty in Asian American studies and ethnic studies more broadly,” Lee said. “I know student mobilization preceded my time and has had momentum in fits and starts since. Thirty years later, as a faculty member, I’m smitten by the intellectual vision to study EIM across disciplinary lines in the way this FAS initiative means us to play outside of the sandlots we’ve been trained to play in.

“It’s quite something to think about doing what I do, but doing it in conversation with colleagues across the social sciences and the humanities. I’m so eager to see who else takes the same leap and to see what we can do together.”