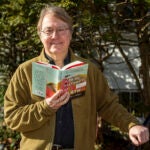 The U.N.’s Intergovernmental Panel on Climate Change suggested in a recent report that with every degree of warming, global agricultural production will be reduced by 10 to 25 percent, threatening the food supply. A team of scientists, including Harvard Forest researcher Tim Rademacher, offers a possible solution in a new article in Nature Communications Earth & Environment. They developed a map showing where the world’s major food crops could be relocated to maximize production and minimize environmental impact. The changes would yield big decreases in the carbon (71 percent), biodiversity (87 percent), and irrigation-water (100 percent) footprints of crop production. The Gazette spoke with Rademacher, who studies tree growth and vegetation at Harvard Forest, about the feasibility and potential impact of the proposal. The interview was edited for clarity and length.

GAZETTE: Why did you and your colleagues take on this project?

RADEMACHER: Food production is facing a complex dilemma, where the world population is increasing, so we need more food to feed the world. Agriculture already takes up more than half of the land that isn’t covered in ice. At the same time, climate change is already reducing agricultural production. There’s a real threat for the food production system when more and more food is needed, but agriculture is already such a strain on global ecosystems. It creates habitat loss, which is problematic for biodiversity. It emits loads of greenhouse gas emissions. The sector as a whole uses loads of fresh water. For us the big question was: How can we move to a system that minimizes these impacts but still produces enough food to feed the world?

GAZETTE: How does the map address this?

RADEMACHER: The map shows what would be the optimal way to feed the world at the moment, if we had a clean slate. We looked at data for the most important crops. We included 25 crops for which we could get consistent datasets, like wheat, barley, and soybean. The crops account for about 77 percent of the global food production, so it’s a substantial part of what humanity eats. Then we asked how much does each crop yield in a specific place and why, and what is the environmental impact in this specific place? Once we had calculated these things for all possible combinations of crops, locations, and impacts, we optimized it. We looked at how we can minimize the impact while keeping the yields sufficient to feed the world. Such an optimal configuration would capture large amounts of carbon, increase biodiversity, and cut agricultural use of fresh water to zero. For instance, in one optimized scenario, the impact of crop production on the world’s biodiversity would be reduced by 87 percent, drastically reducing the extinction risk for many species.

GAZETTE: What would be some major changes to the current agricultural map?

RADEMACHER: There are some really striking differences in terms of where production is optimal and how much land is needed. The reimagined map would have largely new farming areas for most major crops — like wheat, rice, and maize. Generally, the optimal locations for production according to our model are, for example, in the Corn Belt in the midwestern U.S., south of the Sahel in Africa, and a few other places like Ukraine and Argentina. One specific example is California. We traditionally think of California as very productive with high agricultural yields for crops, but it seems that the environmental impacts are not necessarily worth the yields for staple crops like wheat, barley, and maize compared to other areas like the western Corn Belt or the Argentinian Pampas.

Another big change is that huge areas of farmland in Europe and India would be restored to their natural habitat. This would make space for natural ecosystems to breathe from the onslaught of development and the combined climate and biodiversity crisis. The other striking feature is really that tropical forests are basically completely avoided by the model because of their value for nature.

GAZETTE: Is this plan feasible?

RADEMACHER: One of the important things to remember with this is that doing a complete relocation is kind of utopic — certainly in the short run. The idea is to use this map as a general guide and then identify hot spots or target areas, where we want to focus our efforts in terms of food production and to incentivize production in areas where they minimize environmental impacts. What are the areas that have the highest environmental impact, the highest impact on nature? Even if we relocate only 5 to 10 percent of the worst offenders in terms of impact on the natural environment, we can potentially — depending on the intensity of farming use —reduce the environmental impact by half, according to our model.

GAZETTE: Are there any other ways projects like this that embrace big ideas that can contribute to the overall effort to mitigate climate change?

RADEMACHER: It’s important to have a vision of what the ideal world would look like. These big ideas help us to better home in on what is possible and then identify workable solutions that need to integrate economic and social factors. One of the things that was important for us was we didn’t want to make this exclusively about carbon. We wanted to find a way to also include biodiversity and fresh water use because agriculture is a stressor in all of these different areas. By taking this globally consistent approach, we are able to say not only is this area really important for carbon, but it is generally really important when you consider these multiple factors. These types of ideas are also actually quite important because they can give us a little bit of hope.