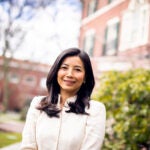 Awards aim to support up to two years of research, writing on social sciences, humanities projects

Sarah Elizabeth Lewis, associate professor of history of art and architecture and African and African American studies, and Jonathan Corpus Ong, a research fellow on the Technology and Social Change Project at the Harvard Kennedy School’s Shorenstein Center on Media, Politics and Public Policy, were named Andrew Carnegie Fellows today.

Lewis and Ong are part of a group of 28 awardees who received the $200,000 stipend from the Carnegie Corporation to devote up to two years to significant research and writing on high-caliber scholarship and research in the social sciences and humanities.

“It’s an honor to be among such an extraordinary group of current and past scholars,” said Lewis, whose research focuses on African American and Black Atlantic visual representations, racial justice, and representational democracy in the U.S., beginning in the 19th century to the present.

Lewis plans to use the award to further her pathbreaking, multidisciplinary “Vision & Justice” project, which examines the intersections of race, visual culture, citizenship, and democratic representation through publications, public events, educational material, and academic courses.

The fellowship will provide support for Lewis’ writing of the forthcoming book “Vision & Justice,” due out in 2024 from One World/Random House, and a new publishing imprint, the Vision & Justice Book Series, with the Aperture Foundation. The books published by the imprint will feature work by Black artists and will be edited by Lewis; Leigh Raiford, associated professor at University of California, Berkeley; and Deborah Willis, artist, historian, and professor at Tisch School of the Arts at New York University.

“I’m deeply grateful, particularly as the Carnegie Fellowship is coming at a vital time to advance the next stage of The Vision & Justice Project,” said Lewis. “We’re living in a period that calls on us all — not just those interested in the arts — to better understand the workings of visuality for racial justice in American democracy.”

Ong, an associate professor of global digital media at the University of Massachusetts, Amherst, plans to use his award to further a project on the precarious work conditions of and digital harm experienced by front-line participants in pro-democracy activities around the world, with the aim of advancing advocacy for worker wellness and justice through the mitigation of disinformation.

His recent work includes research on online “troll farms” and disinformation-for-hire operations in Southeast Asia. In 2021, he and two co-authors published “Human Rights In Survival Mode: Rebuilding Trust And Supporting Digital Workers In The Philippines,” a Shorenstein Center report on the state of communications work in the human rights sector in the Philippines under the government of Rodrigo Duterte. As a policy advocate, his work has influenced changes in campaign finance reform law in elections in the Philippines and social media policy around inter-Asian racist speech.

“I am deeply grateful for the support of the Shorenstein Center and the Technology and Social Change Project team led by Joan Donovan. This is a recognition that we need more engaged ethnographic work that can interrupt dominant paradigms about how we think about social media and democracy in global context,” said Ong. “We need more stories about the creativity and courage of digital activists, organizers, and ‘healers’ just as we need to understand root causes of exploitation and deception in digital economies.”

The Andrew Carnegie Fellows Program began in 2015 and has since named 244 fellows and provided $48.8 million in philanthropic support. The 2022 class of fellows was chosen by a jury of 13 scholars and intellectual leaders, including new member Martha Minow, the 300th Anniversary University Professor at Harvard Law School.

Other winning research topics this year included a series of art installations showcasing the effects of climate change on the lived experiences of Indigenous peoples in the Arctic; an analysis of China’s role in international finance; and a history of Black infant mortality in the U.S. As in previous years, anticipated results from the research include books and major studies. For the first time, some members of this year’s cohort proposed art installations, software applications, and digital platforms.

“We were especially impressed with the breadth of approaches to issues such as climate change, political polarization, migrant populations, and racism, as well as the variety of research locations and historical timeframes, including a project based in the Arctic and one that starts with the origins of humankind,” said Louise Richardson, vice chancellor of the University of Oxford, president-elect of Carnegie Corporation of New York, and a member of the jury panel. “The Andrew Carnegie Fellows are setting a scholarly standard for excellence, and we are delighted to support their endeavors.”