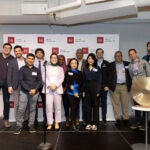 Entering a second decade of innovation

It seems natural that Ryan Christopher Jones, a freelance photojournalist who brings an anthropologist’s eye to his work, will begin a doctoral degree in the field at Harvard’s Graduate School of Arts and Sciences this fall.

But it took two decades, a gift with the camera, and the Harvard Extension School to get him there.

Jones ’22 had spent years covering stories of labor, migration, and the environment in Mexico and the U.S. and researching his family’s roots across the border. Over that time Jones, who is Mexican American, began to yearn for something more. When he found what he was looking for in a course at the Extension School, his “entire life blew up.”

The class was “Moctezuma’s Mexico Then and Now: The Deep History, Triumphs, and Transformations of the Aztecs and their Descendants,” taught by Davíd Carrasco, Neil L. Rudenstine Professor of the Study of Latin America. It offered Jones the broader cultural and historical context to his work that he’d been searching for, introduced him to his academic passion, and helped him see his heritage in a new light.

“I had always thought that I was either too Mexican to be white, or I was too white to be Mexican,” said Jones, whose maternal grandparents moved from Mexico to California where they became farmworkers in the 1940s and ’50s. His paternal grandparents were from Oklahoma and Missouri. “Davíd talked about his own split heritage and identity and said that instead of considering it not enough of one of the other, you have to see it as being able to judge the center and the periphery from two different perspectives.”

More anthropology classes followed and soon, Jones was hooked. “It was asking and answering questions that I’d had as a journalist, as a photographer, for years, and it’s ended up being this huge framework that’s helped me make sense of the world.”

He ended up finishing his liberal arts degree at the Extension School with a focus on anthropology (he started college at Fresno State and left in 2005 a few credits shy of his diploma). But it turned out to be only the beginning.

His professors were impressed by his body of photographic work and his Harvard research, which included an anthropological essay on mosh pits, a peer-reviewed paper on tourism and souvenirs, and a current project with Lisa Gulesserian, a preceptor on Armenian language and culture, on the way the Western media covered the 2020 war between Armenia and Azerbijan. They encouraged him to consider applying to doctoral programs.

“As an anthropologist, I saw his stories, and it was very clear that he could convey a deep understanding of the people that he was photographing just through his images,” said Jason Ur, Stephen Phillips Professor of Archaeology and Ethnology, who has been helping advise Jones on graduate school. “I was really struck with the empathy that he brought to Sikh farmers in the California Central Valley, the first story of his I became aware of. This was like an ethnography … he already saw through his camera like an anthropologist.”

Long an advocate of ethical photojournalism, Jones wrote a New York Times op-ed in 2018 in which he criticized what he called the media’s sensationalist coverage of those suffering from drug addiction. “Part of our job is to visualize issues the general public does not have immediate access to,” he wrote. “We have a responsibility to portray the visceral realities of an often-devastating world, but we also have a responsibility to maintain the humanity of the people we photograph.”

In 2020, Jones captured that humanity during his most challenging shoot. Assigned by the Times to cover COVID patients being given their lasts rites, he camped out in a Brookline hotel room waiting for a call from the hospital about a possible subject, his camera in hand. This was in the earliest, darkest days of the pandemic when family members were not allowed to be with loved ones to say goodbye. Jones would arrive, don head-to-toe personal protective equipment, and join a similarly clad priest and one or two nurses at a patient’s bedside.

He still feels the weight of that assignment.

“It opened up my idea of what it means to be a witness, and how it’s an incredible privilege, and a responsibility for a photographer to document someone’s final moments,” said Jones. “I still can’t really look at those pictures. It’s still so visceral for me.”

Jones found his passion for photography in college, but in his Fresno State coursework, he struggled to narrow his focus. “I was interested in architecture, music, philosophy, Latin, theology,” he said. “I was all over the place, and I couldn’t really attach all those interests to the real world, and that was the big problem.”

In the end, it was a camera lens that helped him see his passion clearly. A college job developing film first piqued his interest in photography. Not long after, he was traveling the globe as a wedding photographer. Then in 2012 a friend asked Jones in to fill in as a freelancer at The Fresno Bee, and something shifted. “The idea of documenting my community was really powerful,” he said, “and within the first couple assignments, I absolutely fell in love with it.”

Jones closed his wedding photography business a year later and drove across the country to New York City, hoping to make it as a photojournalist. Today he is a regular contributor to the Times, The Washington Post, and ProPublica. He is also the 2022 recipient of the $100,000 American Mosaic Journalism Prize awarded by the Heising-Simons Foundation that honors “excellence in long-form, narrative, or deep reporting on stories about underrepresented and/or misrepresented groups in the present American landscape.” Jones’ photography, the judges wrote, “deftly illuminates the complex lives of people whom the news rarely centers.”

And now he’s planning a dissertation based on his work in the Central Valley and Mexican American communities. “Anthropologically,” he said, “I’m extending the work that I’ve done as a journalist.

Ur said he looks forward to watching Jones take advantage of Harvard’s Sensory Ethnography Laboratory, and its critical media practice expertise, and to following his promising career.

“Having read his work, and having gotten to know him,” said Ur, “this guy is going to be a rock star.”