More than just another brick in a wall 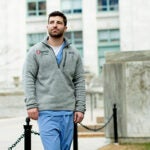 Art installation in Yard serves as mosaic of collective identity of students, institution in time of reckoning, reflection

The student creators of a new public art installation in Harvard Yard believe their work, which was inspired by the protests against police brutality and the toppling of Confederate statues around the U.S., can drive change.

Prominently set in view of the John Harvard Statue between the red clay academic buildings and residence halls, “Inclusions” features ceramic bricks, designed by Harvard students in response to the prompt: “If these bricks could speak, what would they say?” Their etchings included drawings, hashtags, quotes, and political messages about the world of Harvard and beyond.

The installation sets smaller, blank bricks in an alternating pattern with the 200 etched ones in a metal frame, giving the appearance of a wall. Luke Reeve, a master’s student in design engineering at the Graduate School of Design, designed and led the building of the structure in the Yard. Co-creator Cecilia Zhou ’23, a joint concentrator in English and the history of art and architecture, said the intent was to create a space for students to send their own messages to each other and the University and to make a physical mark upon the storied institution.

“We started to think about Harvard and what it means to visually represent our collective identity as an institution and as students,” said co-creator Kiana Rawji ’23, at a panel discussion Tuesday titled “Inclusions: Envisioning Justice on Harvard’s Campus,” which celebrated the installation. “And we wondered what it would look like if you put student minds together to create something that stood for what we believe, what we value now as an institution.”

The event was presented as part of the Presidential Initiative on Harvard and the Legacy of Slavery, a University-wide effort housed at Harvard Radcliffe Institute, and in partnership with Harvard College students who participated in the artmaking, the Office for the Arts at Harvard, the Harvard John A. Paulson School of Engineering and Applied Sciences, the OFA Ceramics Program, and the Monument Project.

At the talk, moderated by Stephen Gray, associate professor of urban design at the GSD, and featuring Tracy K. Smith, Susan S. and Kenneth L. Wallach Professor at Harvard Radcliffe Institute and professor of English and of African and African American Studies, the students recalled the early days after starting a social media campaign and planning a conference on the cultural resonance and future of monuments. In the pandemic, they changed course and embarked on the public art project.

“In thinking about the built environment, the obvious mechanism was the red clay brick and the Georgian Revival buildings that we see speckling Harvard Yard,” said Zhou. “We wanted to give students the ability to speak for themselves and represent themselves as they want to be remembered and to determine how they want to remember Harvard.”

The panel also looked at larger questions of representation and public art, and Smith cited the work of poet Lucille Clifton while discussing the role of poetry in helping people understand difficult personal and collective histories.

“[Clifton] urges readers who are invested in the community of Blackness to embrace the complexity and joy that they carry. She does that not just by telling happy stories … [but] by bringing careful attention and even humility to what is heavy and what is dark and finding meaning,” she said. “I feel like that’s such a marvelous model, because it means that you don’t have to bend over backward to fabricate something that proves worth. But it reminds you that if you’re listening in the right direction, and with the right intention, you will find the worth that is abundant in any place.”

Zhou said the process of making art projects like “Inclusions” is “about resisting complacency, certainly, but also resisting the urge to remain within one’s comfort zone as far as discipline and field and reach.”

“I think this is essentially a microcosm of creation and generation on all levels,” Zhou said. “In order to make real change … one must essentially link arms with people working in all sorts of fields at the same time.”

“Inclusions” is on display until May 2 and marks the first of five public art displays mounted as part of the upcoming Arts First festival.

“I think that we have to constantly be vigilant in asking what’s next?” added Rawji, a joint concentrator in art, film, and visual studies and history and literature. “As students, that’s something we can constantly be doing in our everyday lives … It could be as simple as acting on some of the calls to action that that those bricks are telling us, reflecting on the space we’re taking, [and] reflecting on the kinds of interactions we’re having with our fellow students every day, and the room and path we’re paving for future students here.”